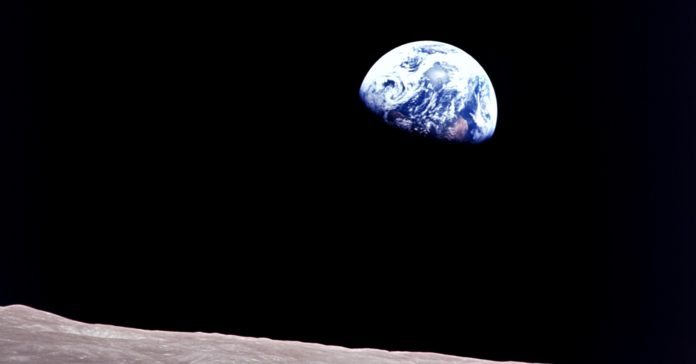 Half a century ago, astronauts aboard NASA‘s Apollo 8 mission become the first humans to leave low Earth orbit, traverse the 240,000 miles separating our planet from its moon, and loop around that natural satellite to look upon its forever-hidden far side (not dark side) with their own eyes. The first crewed voyage to orbit the moon, the astronauts aboard were afforded a unique opportunity: A chance to photograph our planet rising above the lunar horizon.

The most famous of the images they captured—a color photograph, now known as Earthrise, snapped by astronaut Bill Anders with a modified Hasselblad 500 EL medium-format camera—was taken 50 years ago today, on December 24, 1968. The photograph is notable for embodying two seemingly contrasting themes: Humanity’s tremendous achievement at sending its first ambassadors around the moon and back; and the smallness of our species in the vastness of the universe.

Years earlier, President John F. Kennedy had set the audacious goal of landing a person on the moon and returning them to Earth by decade’s end. But the 1960s were nearly over. Kennedy had been assassinated. The year before Earthrise was taken, the warring space programs of the US and the Soviet Union had both suffered terrible losses: NASA astronauts Virgil Grissom, Ed White, and Roger Chaffee—members of the first crewed Apollo mission—had been killed in a fire during a ground test, and Russian cosmonaut Vladimir Komarov had become the first person to perish during spaceflight.

Incredibly, those fateful events did not keep NASA from seeing Kennedy’s plan to fruition. On November 10th, 1968, the agency decided to move forward with a crewed mission around the moon and back. In retrospect, it was one of the riskiest decisions NASA has ever made—the spacecraft was unqualified, and required a boost from the untested Saturn V rocket—but in less than two months’ time, Apollo 8 astronauts Frank Borman, James Lovell, and William Anders had made the voyage and returned safely to Earth.

That mission paved the way for Apollo 11 to land on the moon just seven months later. The Earthrise photo helped make it happen: Magazines, newspapers, and televisions around the world all shared the image. For the first time, Earthbound humans could experience what only a handful of people ever had: A cosmic perspective on our species and its place in the universe.

“Earthrise is an image that, once seen, stays with you forever,” said former ISS flight engineer Nicole Stott, who joined other astronauts in commemorating the anniversary of Apollo 8 at Kennedy Space Center on Friday night. “It is a beautiful reality check of who and where we all are, together in the universe.”

Space historian Frank White has called the sense of global consciousness brought on by seeing Earth at great remove the overview effect.Many astronauts have spoken of experiencing it, including Apollo 14 astronaut Edgar Mitchell, who famously described the sudden awareness as the kind of thing that makes our affairs on earth, our global politics, seem “petty,” and compels one “to grab a politician by the scruff of the neck and drag him a quarter of a million miles out and say, ‘Look at that, you son of a bitch.'”

Earthrise spares us each the quarter-million-mile trip. But no hard feelings if you still feel tempted to ship off some politicos.

Two Satellites Almost Crashed. Here’s How They Dodged It

GizmoCrazed - February 19, 2019 0
The first alert came on January 27. Two small satellites, whirling through Earth's low orbits, had “the potential for a conjunction.” Those are the words...

Moondust Could Cloud Our Lunar Ambitions