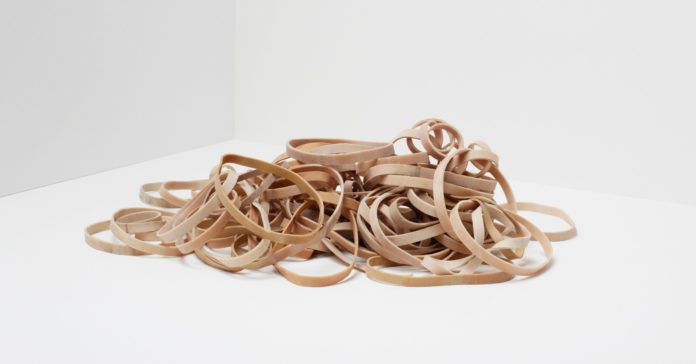 Did you know you can measure an unknown mass with a rubber band? You pretty much can.

The first thing you should do with any project is to play. So, go get a rubber band and play with it. What happens when you stretch it? Perhaps you can feel that it takes a greater force the farther you pull it. Or try this: Hold the rubber band at one end and hang a mass on the other end. Notice how far down it stretches. What if you put a heavier mass on the rubber band? It stretches farther. So, here is our plan: see if there is a a mathematical relationship between the stretch distance and the stretching force.

Now that you have played with the rubber band, it’s time to collect some data. I’m going to start with a very simple rubber band measuring device that I built. Here is what it looks like.

My original plan was to get the bottom ruler aligned so that part of the paper clip at the bottom would line up with the “zero” of that ruler. That didn’t work and I was too lazy to fix it. Actually, I think it’s better this way. Now I can just hang some known masses on the end of the rubber band and measure the position of the paper clip.

Here is the data I get using different known masses.

Yes, technically I should put the mass on the horizontal axis since it’s the independent variable. However, I’m not going to do that. Putting the mass on the vertical axis is going to make the next step easier.

The first important thing about making a graph is that I can see that the mass and the rubber band stretch distance have a linear relationship. That’s important. It says that I can make a linear function to fit the data.

The next thing is to actually get an equation that fits this data. The linear fit for this plot gives the following equation.

That’s it. Now I can use this rubber-band-and-ruler combo to find some unknown masses. All I need to do is to hang the mass from the rubber band and record the stretch distance (in centimeters). Once I have that value, I put it in as “x” in the equation above to calculate the mass in grams. Boom—I just made scale. From a rubber band. Oh, and a ruler.

Now for some homework questions.