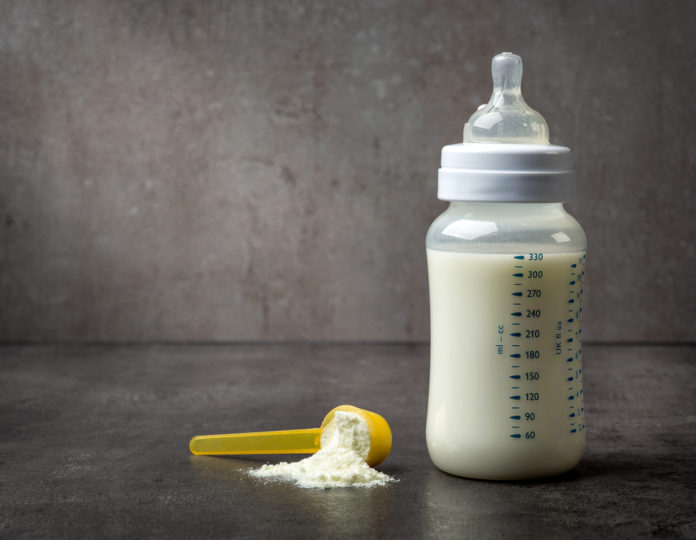 Soy formula exposure during infancy may cause more severe period cramps in adulthood. Around 12 percent of babies are regularly fed soy. (Credit: MaraZe/Shutterstock)

Many women accept menstrual cramps as a fact of life. But researchers say that some women have it worse than others and that it may be related to what they were fed as infants.

Female babies fed soy formula are prone to more painful periods during their young adult years, according to a new study published this week from the National Institutes of Health (NIH). The research, published in Human Reproduction, found that soy feeding was associated with a 50 percent increased risk of moderate and severe menstrual pain. Women who were soy fed also were 40 percent more likely to use hormonal contraception to ease pain and discomfort.

This is the first study since 2001 to look at the long-term impacts of soy exposure during infancy and how it affects menses pain in adulthood. Kristen Upson, an epidemiologist with NIH, said it’s an important area of study because menstrual pain can impact almost every aspect of a woman’s life.

“Menstrual pain is the most common menstrual complaint and can have a substantial impact on the quality of life, affecting school performance, work productivity, and relationships,” Upson said.

To evaluate the link between soy and menses pain, researchers parsed the enrollment data for 1,553 African American women between the ages of 23 and 35 who participated in the Study of Environment, Lifestyle and Fibroids, which was designed to identify risk factors for uterine fibroid development. Participants were asked about early-life exposures — including whether they were fed soy formula as babies, as reported by their mothers. Around 200 women in the study said they had been exposed to soy  early in life.

Participants were also interviewed about their prescription and over-the-counter medication history and the reasons for use (including menstrual pain). In addition, participants were asked how often they experienced moderate or severe menstrual discomfort and pain when they were between the ages of 18 and 22. Researchers found several indicators of severe menses pain among women who had been fed soy as babies – such as using hormonal birth control to relieve painful cramping.

In addition to more pain and discomfort, the research team found a link between soy formula and an increased risk of developing endometriosis, a condition where tissue that normally lines the inside of the uterus grows outside. The researchers also found that soy feeding contributed to heavier bleeding and that women who had uterine fibroids (non-cancerous tissue growths on the uterus) tended to have larger ones as compared to women who were not soy fed.

Although the NIH study didn’t uncover why soy feeding causes more painful menses, Upson suspects that the phytoestrogen genistein is at play. In a developing child, exposure to estrogen-mimicking compounds like genistein may interfere with gene expression and affect uterine development.

“Infancy is a unique time for nutrition and reproductive system development,” she said. “In the early months after birth, an infant’s reproductive system continues to develop, and an infant’s nutrition primarily consists of breast milk and/or formula. This can lead to substantial exposure to the components in formula, including the phytoestrogens in soy formula, during a critical window of development.”

Studies of laboratory animals given genistein in the first few days after birth have shown that it affects the function of the uterus, ovaries, hypothalamus, and pituitary in adulthood, Upson said.

The American Academy of Pediatrics (AAP) recommends human milk as the best source of nutrition for infants. Soy is recommended in rare cases where the infant’s body cannot break down the sugars in milk or if the family follows a vegetarian/vegan diet. A recent study showed that 12 percent of babies are regularly soy fed.

“Given how common menstrual pain is and the adverse impact it can have on women’s lives, we would like to continue to explore factors, including those that occur earlier in life, which may increase a women’s risk of experiencing menstrual pain,” she said.

Will You Upgrade To The iPhone 5? [INFOGRAPHIC]

GizmoCrazed - September 28, 2011 0
With the launch of the iPhone 5 just around the corner, folks have Mashable have published an interesting infographic about people who are planning...

The Cambridge Analytica Data Apocalypse Was Predicted in 2007

Are video games bad or good for you?