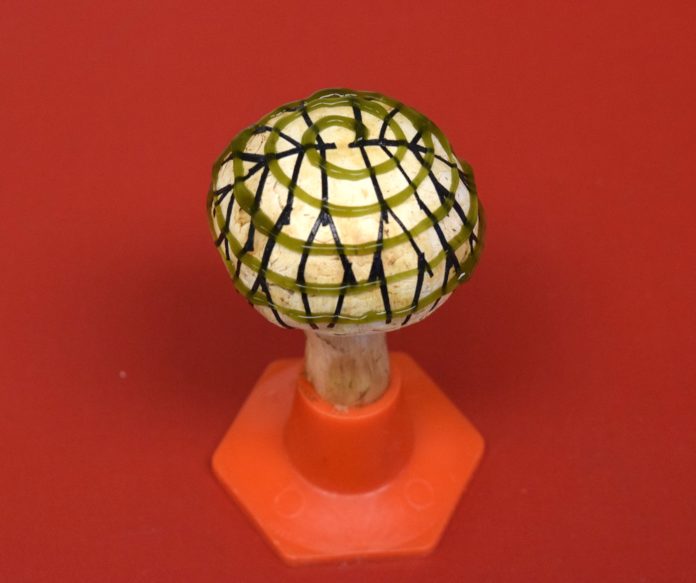 “Power mushrooms” sounds like something out of Super Mario, but a lab in New Jersey has made them a reality.

Hoping to create a new source of renewable energy (and to test out some ideas), a team at the Stevens Institute of Technology engineered a symbiotic relationship between the common button mushroom, some cyanobacteria and a few electrodes made of “graphene nanoribbons” (GNRs) — basically really thin layers of electrically conductive carbon atoms.

As a paper in Nano Letters makes clear, the results were a success and the researchers created a living mushroom that can turn light into harvest-able electricity. As a certain mustachioed plumber might say: “Yahoo!”

To achieve their fungal feat, which the team insists on calling a bionic mushroom (guess they never had a Nintendo growing up), they turned to the near-magic technology of 3-D printing. They literally took a button mushroom, printed the GNRs on it in a branching Fibonacci pattern (inspired by nature), then printed the bacteria using “bioink” in a spiral shape on top.

All of these details were carefully chosen. The mushrooms proved better than artificial materials with similar shapes at providing the bacteria with nutrients and humidity. Cyanobacteria were the perfect choice because they’re so good at photosynthesis, “with an unmatched internal quantum efficiency of nearly 100%” according to the authors. Bascially, the tiny things are evolutionary tuned to be good at turning light into energy. The GNRs were specifically engineered to be efficient at transporting electricity noninvasively, and the different patterns of 3-D printing allowed the GNRs and bacteria to interact at multiple points.

Altogether, the team established what they call an “engineered bionic symbiosis,” combining natural and artificial components into one viable, stable network. Once they got all the right wires connected, they could shine a light on the mushroom, and when the cyanobacteria produced electric current, the GNRs would transport it off the mushroom’s cap and through the wires into the instruments.

True, it was only around 67 nanoAmps of current, but still, the point is that it works. As the study’s authors put it, “The presently developed 3D printed bionic mushroom architecture is an environment-friendly and green source of photosynthetic bioelectricity.” And as with most things electrical, these things could scale up, meaning an array of bionic mushrooms could one day power our electronics.

But the other exciting thing here is that the whole idea of engineering bionic symbiosis, and 3-D printing these things into being, really works. “We believe that techniques developed in the present research can also be extended to 3D print other bacterial colonies,” the authors continue. “Moreover, we envisage that the 3D printing bacterial nanobionics approach can organize different bacterial species in complex arrangements to investigate spatial and environmental parameters for influencing other bacterial social behaviors, such as bioluminescence and virulence.”

So the sky’s the limit in terms of what this kind of technology can accomplish. It’s enough to make even the Mario Bros. jealous.

GizmoCrazed - January 30, 2013 2
BlackBerry (formerly known as RIM), has been struggling as of late. BlackBerry 10, their new operating system has been pushed back several times,  and their...

Physicists say they have detected a fifth force of nature