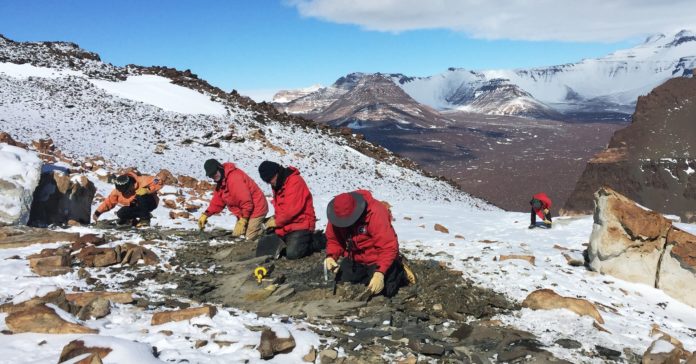 To figure out how and when ancient fish first crawled from the ocean onto land, Neil Shubin is about to head to the mountains of Antarctica. Leaving behind family and friends for the upcoming holidays, he and a team of five other scientists and a mountain guide will be camping at the base of a remote mountain range that was a tropical river delta around 385 million years ago.

Using ropes and climbing gear, the scientists will be scouring cliffs and ridge lines for fossil deposits containing the earliest tetrapods, or four-limbed animals. This is the latest expedition on a fossil-hunting career that has taken Shubin to places as disparate as Ethiopia, West Virginia, and the two poles. To understand better the development of fish into land animals, he has to locate fossils that tell him the speed and direction of evolution.

“We are looking to find the intermediates between water and land,” says Shubin, a vertebrate paleontologist at the University of Chicago. “To do that, we need to find rocks that are the right type, the right age and that are exposed.”

The fossils he hopes to find are preserved in sedimentary deposits that exist in several places around the globe, but what makes Antarctica special for fossil hunters is the fact that there is no rain or snow to erode them away.

After the fish died those millions of years ago, they were covered by layers of silt and mud in the river delta. Over time, that mud turned to rock, and the bones became fossilized. Now the fossils are part of the Transantarctic Mountains, a 2,000-mile spiny ridge that divides East and West Antarctica and is dotted with deep crevasses and treacherous glaciers. The same dry, cold conditions that make life impossible for almost all current life forms (except microscopic algae or bacteria) in these mountains help preserve fossils for millions of years.

The expedition is more than a camping trip. Next week, Shubin will fly from his home in Chicago to Christchurch, New Zealand, and then to McMurdo Station, the main US base in Antarctica. After a few reconnaissance flights, Shubin and six others will board a ski-equipped Twin Otter aircraft for a two-hour trip to Deception Glacier. After setting up camp—one tent per person, plus separate kitchen and work tents—the team will split up each day to cover more ground, Shubin says. “We will be spending each day camped on the ice but hiking up the mountains and looking for bones exposed to the surface,” he says.

Shubin says understanding the origin of walking fish is only one of several questions he hopes to answer. The Antarctic rocks from the Devonian period of 380 to 390 million years ago capture a key moment in Earth’s history when fish and sharks ruled the planet. “Almost anything new we find will be interesting and tell us about how these events happened,” Shubin says. “How did sharks come about? How did skeletons come about? How did our closest fish relatives come about? What were the environments like when fish evolved to walk on land? These rocks are perfect to answer these kinds of questions.”

Princeton geologist Adam Maloof spent weeks poring over satellite images of the area to find these Devonian rocks. The color, texture and mineral content of the surface formations give clues as to the how the rocks were formed and at what time in history. “We need to piece together what the environment looked like and most likely how it would preserve the fossils we are looking for,” Maloof said.

A team of paleontologists from New Zealand and Australia visited the same general area a decade ago, but only stopped for a day before moving on. That’s one reason why Maloof and Shubin believe there field site may provide a trove of new fossil finds.

Maloof is providing Shubin and another paleontologist, Ted Daeschler of Drexel University, with the roadmap for their fossil hunt. But he has his own scientific line of inquiry as well. “Some of the questions for me are whether fish were coming onto land to escape predation, to eat plants, or to escape the ocean climate for a more habitable one on land,” he said. “The first line of answers that will get us closer is a study of what environments these things were living in.”

For the past two decades, Shubin has had pretty good luck finding strange creatures in out-of-the way places. In 2004, Shubin and others discovered a 375 million-year-old half-fish, half-amphibian called Tiktaalik in the Arctic reaches of Canada’s Ellsmere Island. In 2016, he was part of a group that found the fossil skull from a giant salamander that lived 208 million years ago on Greenland’s east coast. And two winters ago, both Shubin and Maloof camped in Antarctica’s Dry Valleys—the only place on the continent that is not covered by a layer of ice. The researchers found several hundred fossils, including skulls of evolutionary cousins of Tiktaalik, also known as the “Fishapod.”

For this winter’s expedition, the jackpot would be a new fishy creature with arms and legs. “That would be a bellringer,” Shubin said.

As field researchers, both Shubin and Maloof spend a lot of time outdoors. But Antarctica is a whole other level of hardship. Temperatures average about 10 to 20 degrees below zero Fahrenheit. Katabatic, or downslope, winds sometimes start blowing from the high-altitude ice sheet in the middle of the Antarctic continent down to the coast at 60 to 80 miles per hour. That can stop work for days at a time.

When that happens, the scientists hole up inside their tents to stay warm and keep busy. During his last Antarctic trip, Maloof says he gave up reading his Kindle because the battery kept dying. “My arms were so cold holding it, I had to do pushups in my sleeping bag before going to bed,” Maloof says. For his part, Shubin has been getting in shape for the expedition by hiking up the 16 flights of stairs in his Chicago high-rise—ten times a day interspersed with alternating days of weights and yoga. “We will be camping at 5,000 to 6000 feet, but when you couple that with how cold and dry it will be, it’s good to have a baseline of cardio.”

Along with his scientific equipment and notebook, Shubin also is packing holiday decorations and ingredients for special cakes. Given the number of nights the fossil-hunters spend away from home, he suggests that any new tetrapod discoveries might be named after the discoverer’s spouse.