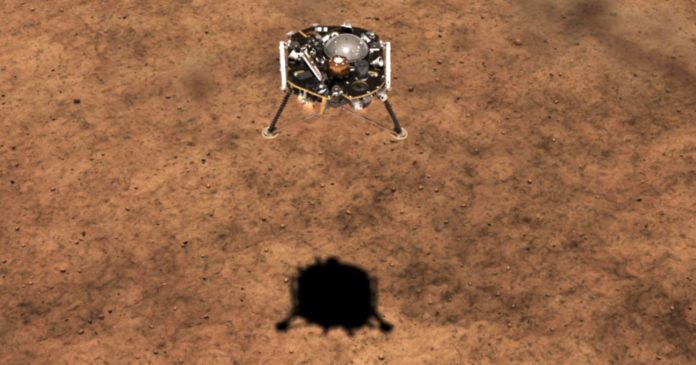 NASA just parked its InSight lander on Mars. Yes, Mars. This is a pretty big deal since quite a few Mars missions didn’t make it. It’s no wonder I get super excited about missions to Mars.

For this particular mission, the lander, protected by a heat shield, used the Mars atmosphere to slow down. After that, it deployed a high-speed parachute to further decrease the speed. Finally, the lander detached from the parachute and traveled the last part of the journey using rockets to control its descent.

Now for the real question, though: Could you be in charge of the InSight landing? What if you did a manual landing, would the robot survive? Let’s find out.

The changing mass of the spacecraft also has an impact on its motion. According to the momentum principle, the total force (gravitational plus rocket) is equal to the time rate of change of the momentum. However, the momentum is defined as the product of mass and velocity. So, a constant net force on the spacecraft will mean a momentum that changes at a non-constant rate since the mass is changing. Yes, it gets tricky.

OK, let’s jump into the game. Here’s how it works.

That’s it. Click “run” to start and then adjust the slider at the bottom for the rocket thrust. The program also displays the vertical velocity and the amount of fuel you have left. This is essentially a dimensional version of the classic video game—Lunar Lander.

This is more difficult that it seems. The problem is that we often think of a direct connection between force and motion such that a greater force makes it move faster. Aha! Not so fast. Actually, a greater force makes a greater CHANGE in motion. As the lander is moving down, you need to increase the force to prevent it from speeding up as it falls. But if you give it too much thrust, the lander slows down so much that it actually starts to speed up in the opposite direction. That’s not landing—that’s taking off.

Now for some homework. See if you can get the lander to the ground (safely) in the least amount of time. Now try creating an algorithm for the magnitude of the thrust (not user-controlled) that makes the shortest time landing. It will be fun.