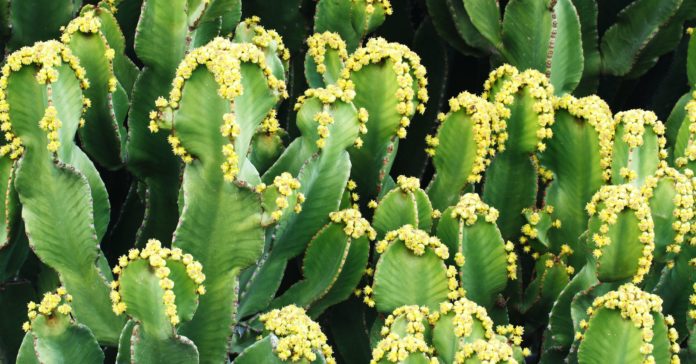 In Morocco there grows a cactus-like plant that’s so hot, I have to insist that the next few sentences aren’t hyperbole. On the Scoville Scale of hotness, its active ingredient, resiniferatoxin, clocks in at 16 billion units. That’s 10,000 times hotter than the Carolina reaper, the world’s hottest pepper, and 45,000 times hotter than the hottest of habaneros, and 4.5 million times hotter than a piddling little jalapeno. Euphorbia resinifera, aka the resin spurge, is not to be eaten. Just to be safe, you probably shouldn’t even look at it.

But while that toxicity will lay up any mammal dumb enough to chew on the resin spurge, resiniferatoxin has also emerged as a promising painkiller. Inject RTX, as it’s known, into an aching joint, and it’ll actually destroy the nerve endings that signal pain. Which means medicine could soon get a new tool to help free us from the grasp of opioids.

The human body is loaded with different kinds of sensory neurons. Some flavors respond to light touch, others signal joint position, yet others respond only to stimuli like tissue injury and burns. RTX isn’t going to destroy the endings of all these neurons willy-nilly. Instead, it binds to a major molecule in specifically pain-sensing nerve endings, called TRPV1 (pronounced TRIP-vee one).

This TRPV1 receptor normally responds to temperature. But it also responds to a family of molecules called pungents, which includes capsaicin, the active ingredient in hot pepper. “So when you put hot pepper on your tongue and it feels like it’s burning, it’s not because your tongue is on fire,” says Tony Yaksh, an anesthesiologist and pharmacologist at UC San Diego who’s studied RTX. “It’s simply activating the same sensory axons that would have been activated if your tongue had been on fire.”

RTX is a capsaicin analog, only it’s between 500 and 1,000 times more potent. When RTX binds to TRPV1, it props open the nerve cell’s ion channel, letting a whole lot of calcium in. That’s toxic, leading to the inactivation of the pain-sensing nerve endings.

This leaves other varieties of sensory neurons unaffected, because RTX is highly specific to TRPV1. “So you gain selectivity because it only acts on TRPV1, which is only on a certain class of fibers, which only transmit pain,” says Yaksh. “Therefore you can selectively knock out pain without knocking out, say, light touch or your ability to walk.”

So if you wanted to treat knee pain, you could directly inject RTX into the knee tissue. You’d anesthetize the patient first, of course, since the resulting pain would be intense. But after a few hours, that pain wears off, and you end up with a knee that’s desensitized to pain.

Researchers have already done this with dogs. “It is profoundly effective there, and lasts much, much longer than I might have expected, maybe a median of 5 months before the owners of the dogs asked for reinjection,” says Michael Iadarola, who’s studying RTX at the National Institutes of Health. “The animals went from basically limping to running around.” One dog even went 18 months before its owners noticed the pain had returned.

That’s a very targeted application, but what about more widespread pain? Cancer patients, for instance, can live in agony through their end-of-life care. Here, too, RTX might work as a powerful painkiller. In fact, the NIH is in the midst of trials with bone cancer patients.

“We use the same technique for administering this as we would a spinal anesthetic,” says NIH anesthesiologist Andrew Mannes. “The whole idea is you’re not injecting into the spinal column itself, you’re injecting it into the fluid that surrounds the spinal column.” Injecting straight into the cord would damage it. Patients are anesthetized for all of this, and treated with short-term painkillers when they wake. “That seems to get them over the worst of it, and then over the next few hours it subsides until the point where they don’t feel the pain any longer.”

Here RTX is working on the same principle as if you injected it straight into a specific area of concern like a knee. But because it’s injected more centrally, it delivers widespread pain relief. “For many of the cancer patients, we need to have the drug remove pain from a lot of different regions,” says Iadarola. “So we give it into a compartment where the nerves to the lower half of the body are gathered together.”

Now, the thing with pain is, it evolved for a reason. It’s an indispensable tool for you to feel if you’re doing something to your body that you shouldn’t be, like holding a scalding cup of coffee. Of course we want to alleviate pain, but might that be problematic if it’s too effective?

For people with knee pain, not really—the injection is targeting a specific area, so the rest of your body can still feel pain. And for end-of-life care, a central injection can bring long-awaited relief. “We’re doing that on cancer pain patients who have tried all other treatments and they’ve not been successful,” says NIH neurosurgeon John Heiss. “The FDA has only allowed us to have the indication for cancer patients with limited life expectancy, because the concern is that if you lose pain and temperature sensation you could have deleterious effects.”

RTX’s promise lies in its specificity. Think of it like a sniper rifle for pain, whereas opioids are more like hand grenades. Opioids target receptors all over the body, not a specific kind of sensory neuron. “That’s why when you give it to somebody, you get problems with constipation, sedation, they can have respiratory depression,” says Mannes.

That and you have to take opioids constantly, but not so with RTX. “You give it once and it should last for an extended period of time because it is destroying the fibers,” says Mannes. “But the other thing with this to remember is there’s no reinforcement. There’s no high associated with it, there’s no addiction potential whatsoever.”

If RTX does become widely available, by the way, it’s not going to be for you to treat a sore post-marathon knee—this is a serious drug for serious conditions. But by more directly addressing the root of pain, a plant with a hell of a kick could help us cut back on opioids and other grenade-like painkillers.

GizmoCrazed - September 13, 2012 1
There has been so much hype about the iPhone 5 that people often forget about what really started this revolution in personal electronics, the...

Facebook Does Not Affect College Students’ GPA Much [STUDY]