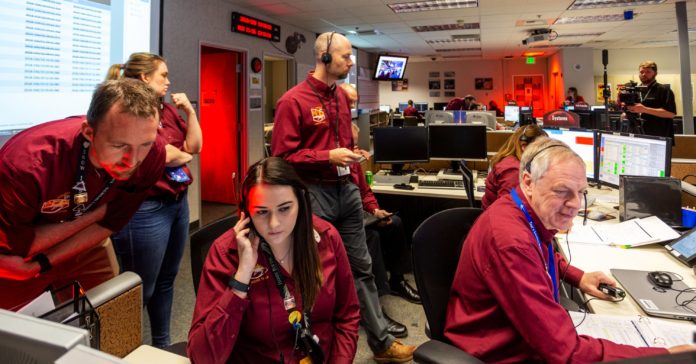 In the morning hours before NASA’s InSight spacecraft entered Mars’s atmosphere, roughly 30 employees of Lockheed Martin gathered in the company’s InSight Mission Support Area, in Denver. They all wore the same red button-down shirt adorned with a mission patch. Someone had taped red plastic over some of the fluorescent lights, to lend the room a martian ambience. As the final hours ticked by before InSight breached Mars’s atmosphere and headed to the surface, there was not much to do except wait, and worry.

Engineers had sent the landing sequence commands to the spacecraft days ago, where they now sat onboard like little bombs, waiting for the proper time to execute themselves. “We can’t joystick it,” says Tim Linn, the lead for the spacecraft’s entry, descent, and landing. The time it takes communications to travel from Earth to the lander is longer than it takes for the lander to alight on the surface of Mars, so everything is preprogrammed.

Over in California, at the Jet Propulsion Laboratory, scientists and engineers handled mission management and navigation, while Lockheed led spacecraft operations. That includes the pre-sent commands to set NASA’s InSight lander safely down on Mars. And today’s their big day: Six months after the lander left Earth, it’s arriving on the Red Planet—hopefully with a soft plop and not a smash. The team has done a lot of work to ensure that latter option doesn’t occur, but, you know, it’s Mars. It’s far away and weird, and only around 40 percent of the spacecraft that intended to reach Mars have done so successfully.

Behind Linn’s head, on a giant screen, a graph showed Doppler data from InSight, red and blue squiggles indicating its velocity. “At this point, we can’t have any hiccups,” he says, looking around the room at the clusters of cubicles where team members perched silently in front of their computers. Round-topped labels, each with an image of Mars printed as the background, declare different sections of the room to be dedicated to Ground Data Systems or Fault Protection or Flight Software. Many of the people now manning the screens actually helped build the spacecraft. Sarah Brandt, a power systems engineer, spent three months living at Vandenberg Air Force Base, to help get the spacecraft ready for launch. Today, she says, feels like Christmas morning. Presents, sure: But also the agonizing waiting beforehand.

Much of spaceflight is waiting. The nearly 800-pound craft launched back in May, and has been zipping toward Mars ever since. InSight—a backronym for “Interior exploration using Seismic Investigations, Geodesy, and Heat Transport”—will help scientists understand how rocky planets form, here in the solar system as well as way out in the rest of the universe.

The first hundred million years of a planet’s existence determine many of their more mature personality traits: what they’re made of, what their atmospheres are like, whether a magnetic field wraps around them. Mars has held onto the remnants of those early processes, in a way that Earth, with its regular geological makeovers, hasn’t.

InSight aims to understand them. It has an instrument that will measure seismic activity (and pick up reverberations from meteorite impacts), a kind of thermometer that sticks itself 16 feet beneath the martian surface, and a device that will take stock of the Red Planet’s rotation. But before these instruments can do their jobs, they had to make the long trip to Mars—an arduous journey no matter how many times humans have sent spacecraft there.

InSight was pretty safe in the long emptiness of space, but it had a last-miles problem: how to slip through the atmosphere to alight safely on the ground. Securing the final phase of its transit was largely the job of engineers at Lockheed, who led InSight’s design and manufacturing, including the equipment that slows it down from 12,300 miles per hour, when it enters the atmosphere, to zero at the surface.

At the point of entry, InSight’s heat shield faces forward to protect its sensitive parts as heat builds up to 2,700 degrees Fahrenheit. The friction from that leg of the trip slows InSight down to less than 1,000 miles per hour. Then a parachute deploys, and the heat shield falls away. InSight’s three legs pop out like turtles’ limbs, and a radar system scans for the surface. A back shell hooked up to the parachute drops off, and InSight fires up its thrusters.

Just kidding! At any step in that process, the mission could go sideways, and there’s nothing anyone at either Lockheed or JPL can do. By the time engineers receive word that InSight has entered Mars’s atmosphere, it will already have landed, or crashed.

As entry time approached, a little blue dot representing InSight clipped closer and closer to an illustrated Mars on a prominent screen at Lockheed. Another display listed the journey’s final milestones and methodically crossed them off. People clustered in front of the screens, murmuring.

A voice from the Jet Propulsion Laboratory came over the speakers in Denver. According to the audio, two small satellites that traveled with InSight, together called the MarCO mission, seemed to be working. Their job was to pick up pings from InSight and send their contents back to Earth. Radio telescopes on Earth also collected some transmissions from the lander.

Soon, the spacecraft was entering the atmosphere. “Blackout is possible during peak heating,” warns the voice. An illustrated version of InSight, looking like a hefty coffee filter, arced across a screen titled “Simulation of Predicted Performance.” The martian horizon curved below it.

So when the voice says, “Sudden change in Doppler,” the whole room claps for a brief second, and then goes quiet.

“Radar is beginning to search for the ground…30 meters…20 meters…17 meters…standing by for touchdown.”

And then it comes: Touchdown.

Someone’s voice, rising over the din, says, “It never gets easier.”

More detailed information about InSight’s journey and physical state is expected to arrive soon from spacecraft orbiting Mars itself: the Mars Reconnaissance Orbiter and Mars Odyssey. Odyssey should confirm whether InSight has successfully deployed its solar arrays, which it will need to keep it alive now that it’s landed safely. That data will arrive at Lockheed just one floor below the InSight control room, in another area called Deep Space Mission Operations.

Wall-sized planet murals adorn this downstairs room, where engineers also operate spacecraft like the Spitzer Space Telescope and OSIRIS-REx, an asteroid sample-return mission that will arrive at its destination next month, in addition to those two Mars orbiters. “How often do we get to land on Mars?,” says Beth Buck, mission operations program manager, who at least has a shot at landing on Mars way more often than most people.

After InSight safely lands, Buck leaves the room and passes by a wall covered with InSight art and facts. One item in the gallery listed today’s date: November 26, 2018. Landing day. Before, it had held symbolic meaning—as a kind of motivational poster, perhaps. Now it has assumed its new identity as a cold, hard fact.