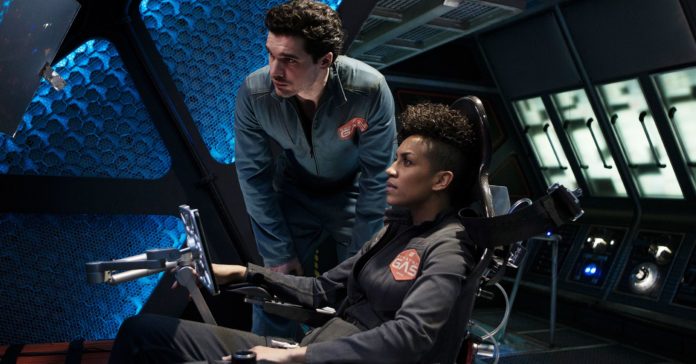 As a fan of science fiction and science, I have to say that The Expanse has a bunch of great science. It’s not just the science in the show. The characters also seem to demonstrate an understanding of physics. One scene from the first season stands out in particular as a classic physics example.

I guess I should give a spoiler alert, but I’m not really giving away any major plot elements. But you have been warned.

OK, since you are still here let me describe the scene. Two main characters (Jim and Naomi) are running on a gangway connected to a spaceship. This gangway is inside a bigger ship that is accelerating (with the engines on) to produce artificial gravity. But wait! They are under fire. Some other dude wants to stop them from getting into the ship, so he fires his weapon. Eventually, someone shoots an important part of the bigger spaceship and its engines cut off. With no thrust, Jim and Naomi lose their artificial gravity and start floating off the gangway. They have magnetic boots, but the boots only work on the gangway. They are doomed.

Now for the physics. Jim took high school in physics and he even paid attention. Let’s review the key physics concepts so that you can fully understand what he did next.

This leads us to the first part of Jim’s physics trick. He uses his feet to push on Naomi. He pushes her up and away which means that she pushes back on him with the same force but in the opposite direction. Here is a diagram.

The second key idea is momentum. Momentum is the product of an object’s mass and velocity. Physicists use the symbol “p” to represent momentum because we think that makes us cool. Actually, some claim that it has something to do with the latin word impetus—but who knows.

Just a couple of comments. The arrows above the “F” and the “p” mean those quantities are vectors (variables with multiple dimensions). You don’t really need to know about that (but here is something in case you want to look it)—I just don’t like leaving the vectors off. It makes me feel icky. The other symbol is the Δ (delta). We use that to mean “change in”. So you have change in momentum divided by the change in time. But the key thing here is change. Forces change momentum.

Now let’s put these two ideas together. Jim pushes on Naomi with some force but that means there is also a force pushing on Jim with an equal magnitude but opposite direction. What do these forces do to Jim and Naomi? They change their momentums. Since their masses probably won’t change (they won’t) that turns into a change in velocity. If Jim has a larger mass than Naomi, he will have a smaller change in velocity to have the same change in momentum as Naomi (but in the opposite direction).

Do you see Jim’s physics trick yet? OK, let’s go over what happens after the artificial gravity stops. First, why do they float up anyway? Is it because you float in zero gravity? Nope. They were pushing on the gangway to support themselves. When the artificial gravity ended, they were still pushing for a short time and this increased their momentum upward.

Now for one more thing. You don’t really understand something until you can model it. Well, here is a python model. Just click the “play” button to run it. I included some comments in the code for your enjoyment.

Feel free to edit the code and play with it. That’s what models are for—to play with.

A Chinese company is GPS-tracking your chicken to ensure they’re healthy...

The Risk That Ebola Will Spread to Uganda Is Now ‘Very...