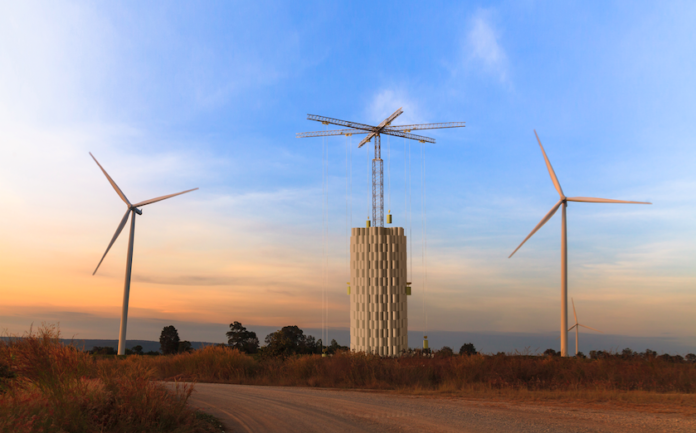 Because solar and wind power are now cheaper to produce than energy from fossil fuels, the only obstacle that remains to the mass adoption of renewable power is the amount of money utilities need to spend to store the energy those systems produce.

Right now, storing 100 megawatts of renewable energy (enough to power roughly 600,000 homes) means spending roughly $65.6 million on massive batteries like the kind made by Tesla, or relying on huge pumped hydro-electric storage projects that essentially create man-made dams where the release of water spins turbines to generate energy (those projects are typically far larger than 100 megawatts).

A new company called Energy Vault, launched from Bill Gross’ Idealab incubator in Pasadena, Calif., has developed a technology, based on the principles of pumped hydro storage, that it claims can slash the cost of energy storage to a fraction of the current price and make renewable energy cost-effective all day, every day.

As climate change worries mount, finding a solution that can make renewables even more compelling and cost-effective isn’t just a good business — it’s a global priority.

Energy Vault’s technology consists of a 33-story-high, six-armed crane with booms extending to nearly the length of a football field (about 87 yards). That crane is surrounded by 5,000 huge concrete blocks weighing roughly 35 metric tons altogether (or around 172,000 pounds).

“These would typically be built out near wind farms or solar plants,” said Robert Piconi, the chief executive of Energy Vault. “This is not something that you’d drop in the middle of the city.”

The cranes are controlled by a software system that manages the movement of the cement blocks to either store the energy generated by solar or wind farms, or discharge that energy onto the power grid.

According to Piconi, each of the company’s systems will have 35 megawatt hours of nominal energy capacity and 4 megawatts of peak power capacity. Ramp times occur in as little as a millisecond with 100 percent power achieved in 2.9 seconds.

The systems have roundtrip efficiencies of roughly 90 percent and there’s no energy loss, as the technology relies on mechanical energy from incredibly durable materials that have a roughly 30-year lifetime.

And all of this at a price tag of around $7 million to $8 million per system, according to Piconi. What makes the system even more sustainable, according to Piconi, is the use of recycled concrete that was only going to be landfilled — instead of new cement construction.

Energy Vault has already set up a demonstration system in Biasca, Switzerland, next to the company’s Lugarno headquarters. That demonstration plant likely had a role in the company’s ability to sign up a clutch of initial customers, including The Tata Power Company Limited, India’s largest integrated power company, to deploy an initial 35 MWh Energy Vault system by 2019.

“Innovation in energy storage represents the largest and most near-term opportunity to accelerate renewable deployments and bring us closer to replacing fossil fuels as the primary source to meet the world’s continual growth in energy demand,” said Bill Gross, co-founder, Energy Vault and founder of Idealab. “We’re excited to support Energy Vault in bringing this groundbreaking technology to the market.”

Indeed, over the next two years, Energy Vault expects customers to build between 500 megawatts and one gigawatt of storage capacity using its systems, according to Piconi.

“We have customers on every continent to build these units,” he said.

Piconi, a former Danaher executive, met Gross 12 years ago as the Idealab founder was beginning his push into renewable energy technologies. The two men stayed in touch and began seriously contemplating the creation of Energy Vault after nearly a decade of collaboration and contact.

It was back in 2017 that Piconi, Gross and fellow co-founder and chief technical officer Andrea Pedretti hit upon the idea for Energy Vault’s novel approach to energy storage.

“It became clear to him a few years ago how important storage was going to be,” said Piconi.

The three men started looking at the efficiencies available through pumped hydroelectric storage, and began brainstorming ways to mimic that process using mechanical energy. “We looked at a steel tower first, but that was too expensive. We thought about water in a tower pumped up, but there were efficiency issues there,” Piconi said. “Then we got to the concrete bricks and the crane.”

The concrete was important for the cost of materials, and because of the energy intensity and pollution that’s involved with manufacturing cement, the team decided to use recycled cement to make the blocks that its energy storage system would use.

Enter, Cemex, one of the largest cement manufacturers in the world, which has joined with Energy Vault as a partner.

Energy Vault has already raised capital through several “seed” rounds to develop its technology and get the prototype in Switzerland up and running.

“Energy Vault’s team has developed a disruptive platform, and we are enthusiastic to work with their team to deploy an environmentally efficient and cost-effective energy storage solution that is highly viable,” said Dr. Davide Zampini, head of Cemex Global R&D and IP. “We share a common commitment to enable a future where resources are used responsibly, which is paramount to Cemex’s strategy for sustainable development.”