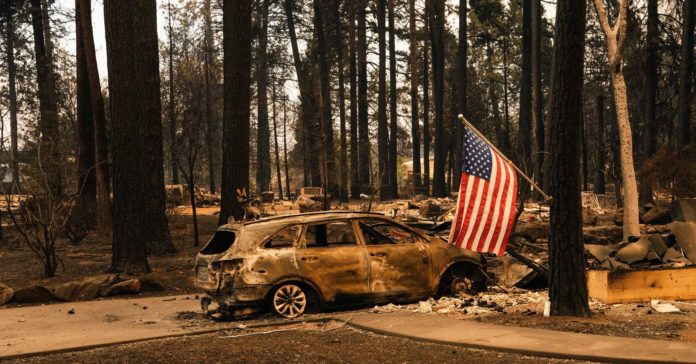 Editor’s note: This is a developing story about California’s Camp Fire and Woolsey Fire. We will update it as more information becomes available.

By at least one metric, we humans are dumber than frogs. The fable goes that if you toss a frog in a pot of hot water, it’ll leap right out. Put it in cold water, though, and bring it slowly to a boil, and the frog won’t notice before it’s too late. That turns out to be a myth—frogs are smarter than that.

Humans aren’t, at least when it comes to climate change.

For nearly a week, fires of unprecedented speed and ferocity have been tearing through California. Up in the north, the Camp Fire is only 25 percent contained, yet it is already by far the deadliest and most destructive in state history—it’s killed 42 and destroyed nearly 7,200 structures. In the south, the Woolsey Fire has scorched over 90,000 acres and leveled at least 370 structures, many of them mansions in Malibu.

We can point to the wind or the lack of rainfall to explain the flames laying waste to Californian homes. But the devastation of this month’s fires is ultimately a product of a warming world. The climate change reckoning is here. This is what inaction looks like.

The tricky thing about climate change is that it’s hard to notice if you’re not looking in the right places. But here’s a list, to get you started: Inuit peoples in northern Canada have less of the ice they rely on to hunt, coral reefs are buckling under the weight of warming and acidifying waters, climate change is making hurricanes worse. These changes may be subtle to the human eye.

You probably did notice, though, that California is burning. The contribution of climate change to this evolving disaster isn’t speculative—it’s pretty obvious in the data. “Some folks will say, well, a few degrees of temperature increase, fires are burning at 1,000 degrees Fahrenheit, how can that possibly make a difference?” says UCLA climate scientist Daniel Swain. The warming manifests in what’s known as the vapor-pressure deficit. “So essentially how much water the atmosphere wants to suck out of the living vegetation.”

California is already very dry due to lack of rainfall. That means parched vegetation, which means lots of fuel for fires. But as temperatures climb, the atmosphere further dehydrates vegetation. At this time of year, a third factor comes into play: so-called downslope windstorms that pour in from the east. As they descend down the Sierra Nevada Mountains, they accelerate and heat up, further dehydrating the vegetation.

It’s all a matter of timing. Usually by this point in the year, California has at least a little bit of rain to rehydrate vegetation. But in these times of climate change, that’s becoming less reliable. “Interestingly, even though there haven’t been large trends in the overall average precipitation in California, there has been a drying trend in autumn in particular,” says Swain. Take a look at the graphic below, which charts how hot and dry California has become during fire season in recent years.

This autumn drying trend comes at the worst possible time, because it coincides with the arrival of the downslope windstorm. All these factors conspire to desiccate vegetation, and on top of that, the winds provide a turbo boost to drive fires with incredible speed. That’s why the destruction and loss of human life have been so astounding with the Camp Fire: Fueled by vegetation with virtually no moisture in it, the conflagration overwhelmed the 27,000-person town of Paradise. It’s a retirement community, so many of its residents didn’t have the means to escape. They are victims of fire, but also of climate change.

The Camp Fire won’t be the last record-breaking blaze. Statewide, wildfires have gotten quantitatively worse. “They’re burning much more land and they’re burning hotter, more intensely,” says Swain. “And there’s a lot of anecdotal, verging on systematic, evidence that these fires are behaving differently. In the initial hours these fires are becoming explosively large much faster than they did historically.”

Climate change isn’t the only factor. California cities have been pushing farther and farther into what used to be wilderness. “In some cases this is at least as important as the climate question, the fact that we now have a lot more people living in harm’s way,” says Swain. Unfortunately, people settle in places where they are at the most risk—around beautiful forests and in valleys, where wind coming from the east is particularly strong.

“We have a real challenge here, threatening our whole way of life,” California Governor Jerry Brown said at a press conference Sunday night. “We’re going to have to invest more and more in adaptation…. And it’s not millions—it’s billions and tens and probably hundreds of billions, even in the span of a few years.” Ironically, California has already done more than any other state to tackle climate change.

The reality is that California may now be looking at a nearly year-round fire season, especially in Southern California. “There’s a lot of evidence backing that up,” says Swain. “What is definitely true is that the fire season has lengthened, and not just by a little bit, but pretty dramatically by months relative to what it was just a few decades ago.”

The climate change reckoning is here, and we are all mere fabled frogs.