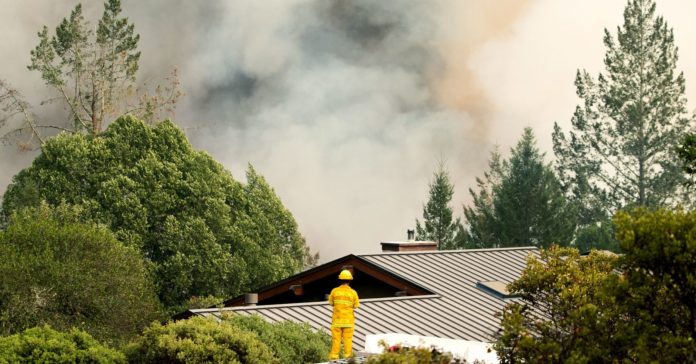 This story was originally published in October 2017, in the aftermath of the Napa Fire. We’ve updated it with details on the Camp, Hill, and Woolsey Fires.

Friday morning, residents in the Bay Area and parts of Los Angeles County woke up to a blood-red sunrise, the smell of scorched timber and an Apple weather app forecast many had never seen before: “Smoke.” Strong winds blowing from the three deadly wildfires that exploded this week across Northern and Southern California have blanketed the region in heavy smoke and ash, causing officials for the Bay Area and South Coast Air Quality Management Districts to issue smoke advisories Friday.

“The air quality today is very bad, on par with something you might encounter in Beijing,” says Ralph Borrmann, a public information officer with the Bay Area Air Quality Management District. In the US, that might seem like an anomaly—but it’s more a portent of the country’s new, char-coated normal. As climate-change fuels increasingly large and frequent wildfires that hit closer and closer to densely populated urban centers, the smoke they produce is becoming a public health crisis.

With the fires currently less than five percent contained and the winds showing no signs of letting up, the weekend smoke outlook doesn’t appear much better. The agencies are especially concerned about unhealthy levels of PM2.5—very small bits of liquids and solids suspended in the air, no bigger than 2.5 micrometers across. Particles this small can be inhaled into the deepest recesses of the lungs, into the broccoli-shaped alveolar sacs, where they bypass the body’s filtration systems and slip directly into the bloodstream. What exactly is in those tiny droplets and specks depends on the source, the season, and atmospheric conditions. But it’s the amount of particulate matter more than the type that matters for health.

Good clean air will have fewer than a dozen micrograms of PM2.5’s per cubic meter of atmosphere. Most people won’t notice anything up to about 55 micrograms, but folks with heart or lung disease will likely experience shortness of breath, wheezing, coughing, and chest pain. Asthma sufferers will become more prone to attacks. And as PM2.5 concentrations rise above 55 µg/m3, anyone working or exercising outside will start to notice.

Breathing will start to feel more difficult, and you might get light-headed. Children get hit harder, since they breathe faster than adults. Beyond 100 µg/m3 even healthy adults just walking around will start feeling a sting in their eyeballs and at the back of their throats, chest tightness, and the need to cough. Air monitors near the WIRED offices in San Francisco were reading out 162 µg/m3 on Friday, and the mucous membrane burn was quite noticeable indeed. Symptoms like these will go away when air quality improves. But breathing in a lot of PM2.5’s can lead to serious long-term health problems.

Public health officials like Bormann are advising people to first and foremost stay indoors. If you’ve got air conditioning at home, set it to recirculate mode and make sure all your doors and windows are tightly closed. Three out of five households in California report having air conditioning, although most of these are in the southern parts of the state. Karl the Fog provides all the air conditioning the Bay Area has ever really needed. Good for the energy grid. Bad for those seeking a smoke-free haven.

As for facewear, a bandana worn around the mouth won’t do anything but making you feel like an outlaw. One-strap paper masks or surgical masks won’t help you either. Your best bet: disposable respirators, like the ones found at hardware stores and pharmacies. Look for ones labeled N95 and make sure they’re properly sealed around your face (that goes double for San Francisco’s bearded hipsters).

But Really… Stay Inside

But masks don’t filter out everything, and they don’t fit well on children or people with facial hair. The best thing to do is limit your time outside as much as possible. And don’t exert yourself any more than you have to. Because while it’s hard for scientists to predict how bad air quality will be in the aftermath of a wildfire, it’s even harder for them to predict the long-term public health impacts.

Over the years, researchers have tried unsuccessfully to measure the full health effects of wildfire smoke. The general consensus, based on hospital records, is that more smoke means more trips to the doctor for things like asthma, pneumonia, bronchitis, COPD, and heart failure. Children, the elderly, women, African Americans, and those with underlying chronic diseases appear to be most susceptible. But it’s been tricky to prove causation, because air pollution comes from so many places—wildfires, yes, but also tailpipes and factories.

That’s one of the reasons the Environmental Protection Agency launched a crowd-sourced study last year to understand the link between wildfire smoke and health impacts. Using an app called SmokeSense, anyone can now send the EPA a snapshot of the air quality in their zip code, report nearby smoke or fire, and list symptoms they’re experiencing.

It’s work that’s increasingly important as more acres of American forests go up in smoke each year. “As the climate continues to change, we’re going to see much more smoke, at higher intensities in the future,” says Jia Coco Liu, an environmental health researcher at Johns Hopkins. Based on air pollution from past and projected future wildfires in the American West, Liu and a team of scientists at Yale estimated that by mid-century more than 82 million people will experience smoke waves—more than two consecutive days with high levels of wildfire-related air pollution. People in the new Smoke Belt—Northern California, Western Oregon, and the Great Plains—are likely to suffer the highest exposure.

And there’s one more bit of bad news: Just as fire behaves differently in a city than it does out in the wild, so does smoke. Urban areas, with their concrete roads and walls of glass and steel, tend to stop a fire in its tracks. All those buildings and alleyways prevent wind from blowing fresh embers around. But those same aerodynamics mean that smoke gets trapped in cities. Liu’s more recent research also found that metropolitan areas, even ones very far away from any actual wildfires, had much higher levels of particulate matter in the air than rural areas. An urban smoke island effect, if you will.

By looking at Medicare billing information, Liu was able to see a corresponding uptick in respiratory and other health issues. She hopes the research will help raise awareness that wildfire smoke is more than a nuisance. “People think of wildfires and they think about houses burning down,” she says. “From the city it can feel like a faraway problem. But actually, it’s the smoke that has a much higher impact.”

22 Illustrations That Show How Smartphones Take Over Our Lives

GizmoCrazed - May 3, 2015 0
A smartphone can be your best friend and can prove to be your worst enemy in certain situations. Getting a phone call you never...

What Can Stop a Speeding Bullet? A Whipple Shield, Of Course

iPhone 5 To Have A Curved Glass Screen [REPORT]