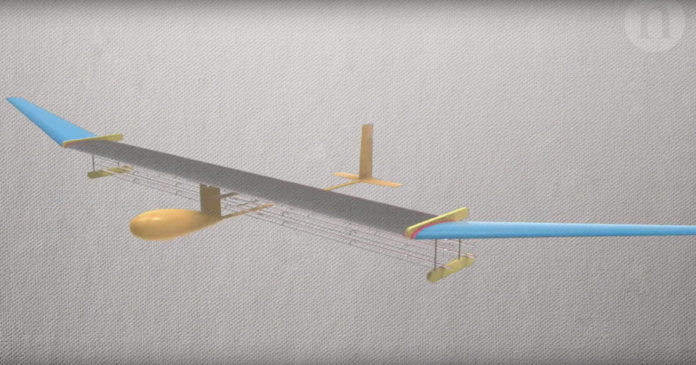 A screenshot from a Nature video showing the ionic wind drone. (Credit: Nature)

Most drones today are noisy: The whine of motors and the hum of propellers produces an unavoidable din that instantly telegraphs their presence.

By contrast, the small plane that flew across an indoor track on the MIT campus this fall was eerily silent. Though its furthest flights were obviously powered, you could be forgiven for thinking it was some sort of trick. That’s because the plane uses an entirely novel propulsion system, one without even a single moving part.

Researchers call it an “ionic wind,” and the technology could offer a means of silently powering drones of the future, as well as being a potentially cleaner source of thrust for even larger aircraft.

The craft generates thrust with a pair of wires carrying electric current, set one behind the other. The wire in front carries an electric charge of extremely high voltage — 40,000 volts in this case — and it’s enough to knock electrons from nitrogen in the air, turning them into charged ions. The electric field generated between the set of wires then accelerates the ions toward the rear of the plane, and they bump into air molecules along the way, transferring energy to them and creating an air current. The force generated by that air current is what ultimately lets the plane fly.

It’s similar to the ion drives that power some NASA spacecraft, and it was motivated, the authors say, by another sort of craft: The shuttles in Star Trek that fly without obvious engines or noise, just a faint blue glow.

The technique was actually investigated as far back as the 1920s, says study co-author and MIT researcher Stephen Barrett, and picked up again in the 1960s, but the limited technology of the time meant that scientists concluded it would never be feasible as a means of propulsion. Some hobbyists have built small hovercraft-like designs using ionic winds, but that had been the extent of the technology’s reach.

Today, Barrett and his colleagues have taken advantage of advances in electronics and computer modeling systems to fine-tune and significantly scale down the components required to create ionic winds. They fit their design underneath the wings of a 5.5 pound fixed-wing drone with a sixteen-foot wingspan, and succeeded in flying almost 200 feet after a bungee-assisted launch.

They describe their work today in Nature.

The flight is the result of almost a decade of work on the concept, a project that saw the researchers dusting off and updating concepts from the 1960s to the point that powered flight was actually possible. It entailed vastly scaling down the converter that jumps the current up to a high voltage, as well as relying on new and more lightweight battery technology. The researchers also used computer modeling programs to help to squeeze every bit of efficiency from the system.

Achievements aside, though, the system is still far too inefficient for anything more than an extremely lightweight drone plane at the moment. Part of the reason is that ionic wind systems get more efficient at higher speeds, something the 11 mph speed limit of their prototype doesn’t allow for. But this is just a proof-of-concept, the researchers emphasize, meant to show that ionic wind technology can indeed independently power an aircraft.

Barrett says he’s confident that the system can be scaled up, and he sees the most immediate applications in the world of drones. Ionic wind propulsion systems could be used to create drones that are completely silent, and therefore far less annoying to the people they buzz and swoop over.

Powering commercial aircraft with ionic winds remains a more tenuous possibility. Propellers and jet engines are far more efficient than ionic winds right now, and the technology would need to advance significantly for it to become a viable option. Still, ionic winds could function as a secondary power source on aircraft once they’re aloft, and they could be powered by solar panels, says Franck Plouraboué in an associated Nature commentary.

Barrett also sees applications for the technology in the realm of the very small.

“Solid state things tend to lend themselves to scaling down quite well,” he said at a news conference Tuesday. “There does seem like there’s the potential for creating extremely small flight vehicles that could serve purposes that previously haven’t been imagined.”