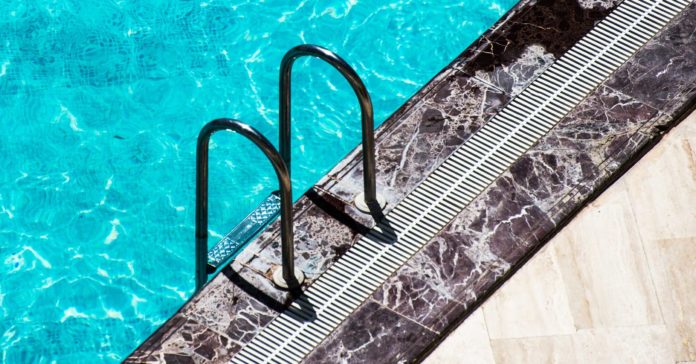 What’s so great about getting in a swimming pool? The answer is that it can make you feel like a superhero. Even in the shallow end, you can easily lift another person—even someone larger than you. You become the hero of the pool area (until you get out of the water). Even just floating in the pool, you feel like you are defying gravity.

OK, maybe this is just how I act in the water. Maybe you just swim laps or splash in the water. That’s fine too, I guess (but try the superhero thing some time).

The reason you are so strong in the water is because of the buoyancy force. This is a force that every object in water or even in the air has pushing up on it. OK, you rarely notice this buoyancy force in the air, but it’s there (just small) To help you see it, here’s a quick experiment to show how the buoyancy force works in water.

Let’s say you have a glass of still water sitting on a table. It’s important that the water is still. Now imagine a small section of water inside that water. Maybe it’s a cube of water that is 1 cm on a side. Here’s a diagram that might help.

I put a dotted line around the special water-in-the-water so you can see it. I mean, it’s still just water (even though it’s special). But what happens to this special water in the rest of the water? This is not a trick question. The answer is that that water just sits there. It’s in water, it doesn’t move. You could say it floats in water. Really, it has to float. Otherwise it would accelerate down and then the water wouldn’t be still. But this is still water.

Now suppose I replace this cube of water with some other object—let’s use a metal block of the exact same dimensions. Like this:

If you are wondering what that heck that p-looking symbol is, it’s the greek letter ρ (pronounced rho) and it’s the variable for density. Chemists often use “d” for density—but that’s just because they aren’t as cool as physicists. Oh, and if you put something in water it has a density of around 1000 kilograms per cubic meter. The V in the above formula is the volume of the water displaced and g is the gravitational field.

OK, now for an experiment. What happens if you partially submerge an object in water? Is there a way to measure this buoyancy force in a fun way? Yes, there is. Here’s what I’m going to do. I have an aluminum cylinder. I can partially put it in water and suspend it from a scale.

This looks bad, but really it’s not so bad. Let me go over the key parts.

Notice that as I lower the the cylinder in the water, the depth changes and the scale reading changes—everything else is constant. Since the force from the scale and the height have a linear relationship, I should be able to plot Fs vs. h and get a straight line. That’s exactly what I’m going to do. Here is what I get.

Boom. That looks pretty linear to me (as it should be). But wait! There’s more. When I fit a linear equation to the data, I get a slope of -5.1335 Newtons per meter and a vertical intercept of 1.088 Newtons. Both of these values mean something related to the experiment. With a tiny bit of algebra (just a tiny bit), I can modify the force equation above to look like this:

In this more familiar form (remember I am plotting Fs vs. h), it’s easier to see that the slope should be ρgA and the intercept should be the weight (mg). I can check these two things. If I measure the diameter of cylinder, I can get a calculated cross-sectional area of 0.00049 m2 for an expected slope of 4.81 N/m. That’s pretty close. For the intercept, I get an expected value of 1.079 N. Again close.

See. Graphs are our friends. It is a great way to show a linear relationship between two things. I try to tell my students this all the time, but they don’t believe me.