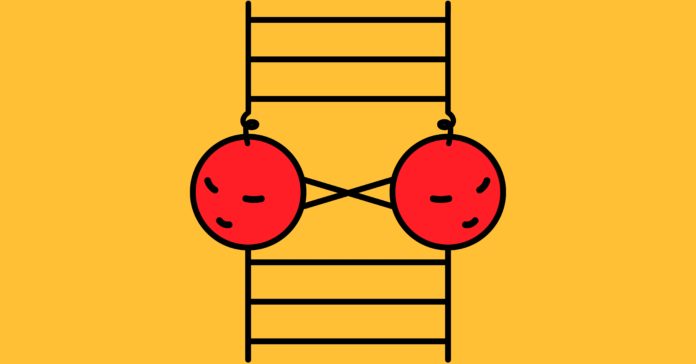 We said “don’t freak out,” when scientists first used Crispr to edit DNA in non-viable human embryos. When they tried it in embryos that could theoretically produce babies, we said “don’t panic.” Many years and years of boring bench science remain before anyone could even think about putting it near a woman’s uterus. Well, we might have been wrong. Permission to push the panic button granted.

Late Sunday night, a Chinese researcher stunned the world by claiming to have created the first human babies, a set of twins, with Crispr-edited DNA. “Two beautiful little Chinese girls, Lulu and Nana, came crying into the world as healthy as any other babies a few weeks ago,” the scientist, He Jiankiu, said in the first of five promotional videos posted to YouTube hours after MIT Technology Review broke the news.

Lulu and Nana are reported to have a genetic mutation, courtesy of Crispr, that makes it harder for HIV to invade and infect their white blood cells. The claim, which has yet to be independently verified or backed up by published data, has ignited furious criticism, international outrage, and multiple investigations. The scientific outcry has been so swift because He’s purported work, conducted in secret, bulldozes past existing ethical guidance on so-called “germline editing,” in which alterations to an embryo’s DNA will be passed down to subsequent generations.

What’s perhaps most strange is not that He ignored global recommendations on conducting responsible Crispr research in humans. He also ignored his own advice to the world—guidelines that were published within hours of his transgression becoming public.

On Monday, He and his colleagues at Southern University of Science and Technology, in Shenzhen, published a set of draft ethical principles “to frame, guide, and restrict clinical applications that communities around the world can share and localize based on religious beliefs, culture, and public-health challenges.” Those principles included transparency and only performing the procedure when the risks are outweighed by serious medical need.

The piece appeared in the The Crispr Journal, a young publication dedicated to Crispr research, commentary, and debate. Rodolphe Barrangou, the journal’s editor in chief, where the peer-reviewed perspective appeared, says that the article was one of two that it had published recently addressing the ethical concerns of human germline editing, the other by a bioethicist at the University of North Carolina. Both papers’ authors had requested that their writing come out ahead of a major gene editing summit taking place this week in Hong Kong. When half-rumors of He’s covert work reached Barrangou over the weekend, his team discussed pulling the paper, but ultimately decided that there was nothing too solid to discredit it, based on the information available at the time.

Now Barrangou and his team are rethinking that decision. For one thing, He did not disclose any conflicts of interest, which is standard practice among respectable journals. It’s since become clear that not only is He at the helm of several genetics companies in China, He was actively pursuing controversial human research long before writing up a scientific and moral code to guide it.“We’re currently assessing whether the omission was a matter of ill-management or ill-intent,” says Barrangou, who added that the journal is now conducting an audit to see if a retraction might be warranted. “It’s perplexing to see authors submit an ethical framework under which work should be done on the one hand, and then concurrently do something that directly contravenes at least two of five of their stated principles.”

One is transparency. Reporting by Tech Review and The Associated Press has raised questions about whether He misled trial participants and Chinese regulators in his ambitions to make the first Crispr’d baby. Two is medical necessity.

Take the gene He’s group chose to edit: CCR5. It codes for a receptor that HIV uses to infiltrate white blood cells, like a key to a locked door. No key, no access. Other controversial Crispr firsts have attempted to correct faulty versions of genes responsible for inherited, often incurable disorders, reverting them back to the healthy version. In contrast, He’s group crippled normal copies of CCR5 to lower the risk of future possible infection with HIV—a disease that is easily prevented, treated, and controlled by means that don’t involve forever changing someone’s DNA. Drugs, condoms, needle-exchange programs are all reasonable alternatives.

“There are all sorts of questions these issues raise, but the most fundamental is the risk-benefit ratio for the babies who are going to be born,” says Hank Greely, an ethicist at Stanford University. “And the risk-benefit ratio on this stinks. Any institutional review board that approved it should be disbanded if not jailed.”

Reporting by Stat indicates that He may have just gotten in over his head and tried to cram a self-guided ethics education into a few short months. The young scientist—records indicate He is just 34—has a background in biophysics, with stints studying in the US at Rice University and in bioengineer Stephen Quake’s lab at Stanford. His resume doesn’t read like someone steeped deeply in the nuances and ethics of human research. Barrangou says that came across in the many rounds of edits He’s framework went through. “The editorial team did spend a significant amount of time improving both the language and the content,” he says.

It’s too soon to say whether He’s stunt will bring him fame or just infamy. He’s still scheduled to speak at the human genome editing summit on Wednesday and Thursday. And China’s central government in Beijing has yet to come down one way or another. Condemnation would make He a rogue and a scientific outcast. Anything else opens the door for a Crispr IVF cottage industry to emerge in China and potentially elsewhere. “It’s hard to imagine this was the only group in the world doing this,” says Paul Knoepfler, a stem cell researcher at UC Davis who wrote a book on the future of designer babies called GMO Sapiens. “Some might say this broke the ice. Will others forge ahead and go public with their results or stop what they’re doing and see how this plays out?”

What happens next makes all the difference. The fact that two babies now exist with one gene changed by Crispr to a less common form doesn’t change the world overnight. What changes the world is how society reacts, and whether it decides to let such DNA-altering procedures become common.

How To Set Your Own Image As A Background In Gmail

GizmoCrazed - April 16, 2011 0
You may have been using built-in themes in Gmail to give your inbox a personalized look. To make it even better, Google now lets...

Here Are The World’s Safest Airlines for 2015