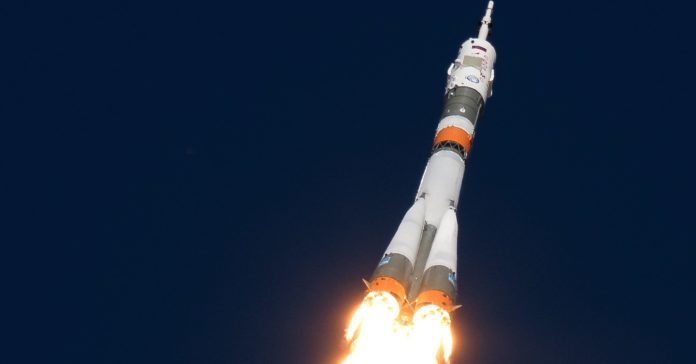 On Thursday, Russian officials held a press conference to reveal that they have determined what caused last month’s Soyuz mid-flight failure. The culprit: a damaged sensor on one of the rocket’s four boosters responsible for stage separation. With the investigation complete, the officials announced that they will move up the date of the next crew launch to the International Space Station.

The investigation has captured international attention because the Soyuz rocket is currently the only vehicle capable of transporting people to and from the ISS. Russian space agency officials confirmed that the faulty sensor, designed to signal stage separation, had caused one of the boosters to improperly separate. This led the first and second stages of the rocket to collide, which then triggered the vehicle’s emergency abort system.

“The launch failure was caused by an abnormal separation of one of the strap-on boosters that hit with its nose the core stage in the fuel tank area,” said Oleg Skorobogatov, deputy director of the Central Research Institute of Machine-Building who led the investigation, in a statement.

Video of the incident, released today by the space agency, shows the accident from the rocket’s point of view. In it, the booster in question strikes the core of the rocket, causing a significant jolt, which triggered the abort. According to officials, the afflicted sensor rod was bent slightly during the assembly of the rocket. To check for any handling errors that might have also affected other rockets, Russian officials said that all assembled Soyuz rockets—and their attached booster pack—will be taken apart and put together anew.

Last month’s incident marks the first failure for Russia’s human spaceflight program since 1983, when a Soyuz exploded on the launch pad. (The two Soviet cosmonauts on board, Vladimir Titov and Gennady Strekalov, were able to jettison to safety). This year’s incident, however, was the the second crew launch in a row in which a quality-control mishap caused a significant problem. In August, the crew members onboard the space station discovered an air leak originating from one of the Soyuz capsules that was docked with the space station. The leak was eventually traced to a tiny hole in the Soyuz’s orbital module, and crew members were able to repair the ship with ease. No one on board was in any danger, but the leak has been a source of controversy as officials work to determine how the hole was made.

This problem, like the faulty sensor, was most likely caused by a manufacturing defect—in this case, a wayward drill hole. Roscosmos is still investigating the accident, but is not expected to release any findings before the end of the year. A spacewalk is currently planned for December, so that Russian cosmonauts can inspect the afflicted area.

Now that the cause of the launch anomaly has been determined, Roscosmos says the investigating commission has approved crew to begin flying again. The next flight, which was originally scheduled for December 20, is now set to launch on December 3. The shift will allow the station’s current crew of three—American astronaut Serena Auñón-Chancellor, German Commander Alexander Gerst, and Russian cosmonaut Sergey Prokopyev—to return home a few days earlier than had been planned.

That’s good news, as each Soyuz spacecraft is only certified to stay docked to the space station for approximately 200 days. With their lifeboat’s shelf life set to expire in January, this upcoming flight will help ensure the orbital outpost isn’t left vacant. Currently, the Russian Soyuz spacecraft is the only vehicle capable of ferrying crews to the ISS.

Russia has several flights planned before the next crew steps on board. The Soyuz comes in multiple configurations (capable of launching both people and payloads) that share a common separation system. Last week, a Soyuz 2-1b successfully launched, carrying a military reconnaissance satellite into space. On November 16, a Soyuz will carry a Russian cargo ship to the space station. Those flights will give Soyuz the chance to rebuild its reputation—before it gets back to carrying people.