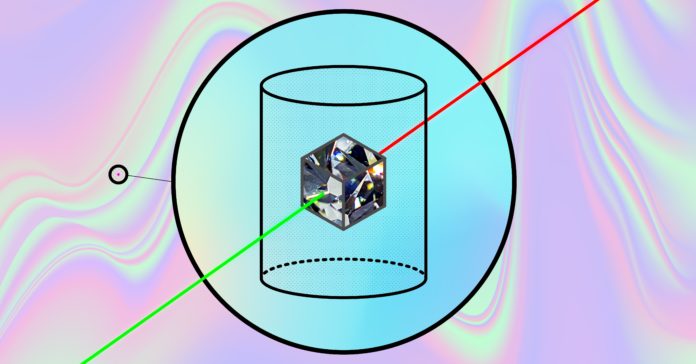 In 2015, the U.S. Naval Academy decided that its graduates needed to return to the past and learn how to navigate using the stars. Nine years prior, it had dropped celestial navigation from its requirements because GPS was so accurate and simple to use.

But recent events had shaken the academy’s faith in GPS. Researchers had taken over a yacht’s navigation system as it steered in the Mediterranean. A truck driver in New Jersey had been fined $32,000 for driving an illegal signal jammer too close to Newark’s airport and interfering with its system. (All the driver wanted was to keep his boss from tracking him.) So the academy figured that its naval officers needed a backup plan, with trusty Polaris as their guiding star. The skies could never be hacked.

Except by clouds. “What do you do if you can’t see stars?” says engineer Michael DiMario of Lockheed Martin.

He and his team may have a solution: quantum sensors.

For nearly five years, DiMario’s team has been building a prototype: a cylinder, about a foot long and six inches in diameter, containing a synthetic diamond cube barely larger than a salt crystal. The diamond contains special impurities; in its repeating cubic lattice of carbon atoms, every now and then a carbon goes missing and its neighbor is a nitrogen atom. These so-called nitrogen vacancy centers, or NV centers, sort of bind together to form a molecule-like duo inside the diamond, and they turn out to be excellent magnetic sensors.

When a green laser illuminates the diamond, the NV center responds by emitting red light. Due to quantum mechanics’ effects, the diamond emits more or less light depending on the magnetic field that it is in. Researchers have used such diamonds to measure the magnetic field from a neuron firing in a squid, for example.

For navigation, DiMario uses the diamond to detect distinctive ripples and bumps in Earth’s magnetic field known as magnetic anomalies, which the National Oceanic and Atmospheric Association has previously mapped. Once he identifies an anomaly, he can use it as a reference point to navigate. Currently, ships and planes do not use magnetic anomalies for navigation because most magnetic sensors can only measure the field strength and not the direction the field is pointing, says DiMario. But his team’s device can measure both. Because it doesn’t need to communicate with a satellite to function, this quantum sensor is less vulnerable to hacking.

So far, DiMario and his team have used the sensor to navigate a flight, an SUV in New Jersey, and a ship in the Chesapeake Bay. Eventually, DiMario wants to shrink the cylinder to the size of a hockey puck, where it could be used in any type of transportation as an independent check on GPS.

DiMario and his team aren’t the only ones betting on quantum navigation. At a National Institute of Standards and Technology lab in Colorado, physicist Azure Hansen is working on a quantum gyroscope for sensing rotational motion. Pilots, for example, currently use a type of gyroscope to keep their planes level, and self-driving cars use them to navigate. But current gyroscopes drift, much like how a fast clock gets more wrong as time goes by. The drift is substantial enough that pilots have to reset gyroscopes, a largely automated process, every hour or so. The auto-reset works well—except if it breaks. Quantum gyroscopes could be more reliable because they don’t drift at all, says Hansen: their fundamental components are atoms and won’t warp with time.

Hansen’s device fits on a tabletop, about the size of two stacked minifridges. Inside is a glass chamber, smaller than a sugar cube, that contains eight million rubidium atoms. A laser steers the atoms, which behave more like waves colliding in a pond than discrete particles. The collisions produce a ripple pattern that, when imaged, looks like a bunch of stripes. If the chamber rotates, the stripes will rotate too. The number of stripes tells you the degree of rotation; and variations in the pattern will even reveal the strength of Earth’s gravitational field. Taken together, this rotational information and the measurement of Earth’s field can also act as a navigation tool, says Hansen. Like the diamond magnetometer, it can also be used as backup for GPS.

NIST’s gyroscope measures rotation by prodding rubidium atoms with lasers to produce a distinctive stripe pattern on a detector.

National Institute of Standards and Technology

Researchers are eyeing quantum sensors for other types of measurements, too. NIST chemist Jay Hendricks has developed a pressure sensor that uses fundamental properties of helium atoms that airplane pilots could eventually use to measure altitude. The sensor works by beaming a laser into a metal chamber filled with helium gas, which alters the laser’s color depending on outside pressure. They have used a version of this device to produce the national standard for pressure, which aviation companies will use to calibrate all pressure sensors. Boeing and Lockheed Martin have both expressed interest in the device.

Yet the production issues are significant for quantum navigation instruments, and once market-ready, their ideal uses are still unclear. “They work, but we still have to engineer them really hard,” says physicist Pauli Kehayias of Sandia National Laboratory. “Just because it’s quantum doesn’t mean that it’s better.”

Hansen acknowledges that shrinking and perfecting these devices will likely take years. Her group hopes to see its gyroscope hit the market within the decade, to begin providing more secure navigational protocols on land, air, sea, and even in space. “I’m not sure that the average person will appreciate the quantum-ness,” says Hansen. “I don’t think they’ll really notice the change.”

Though quantum navigation may not beat the precision of current tools, it might not need to, in the same way that the canned pasta in your tornado kit does not need to taste better than handmade fettuccine. “In real-world conditions, if I can get within 200 meters of GPS accuracy, that would be a huge success,” says DiMario of his magnetometer. He expects that even with a commercial version of his device, navigation systems in ships and planes would still primarily use GPS. The quantum sensors would serve as backup, rain or shine.