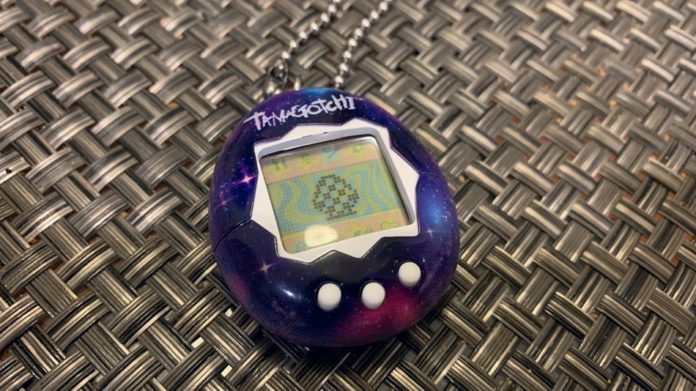 Other than some color updates, there isn’t much new to be had in the Gen 1 and Gen 2 Tamagotchis. But simplicity is the point: This is a fun, affordable pet-simulation toy that owners of the original will find irresistible.

In 2017, Bandai marked the 20th anniversary of the Tamagotchi with a miniature version of the electronic pet. Now, the company is hoping to capitalize on ’90s nostalgia by re-releasing the original.

I’ve been trying the new collections (called Gen 1 and Gen 2), which are still in the iconic handheld egg-shaped form, for a week.

There isn’t a whole lot that’s new about these Tamagotchi collections. Gen 1 comes in the same colors and with the same software as the original. Gen 2 has some newer designs (I love the galaxy one with its adorable space theme) and identical software except for the game.

With these two Tamagotchi collections offering little in the way of new features, are they anything more than a nostalgia play? 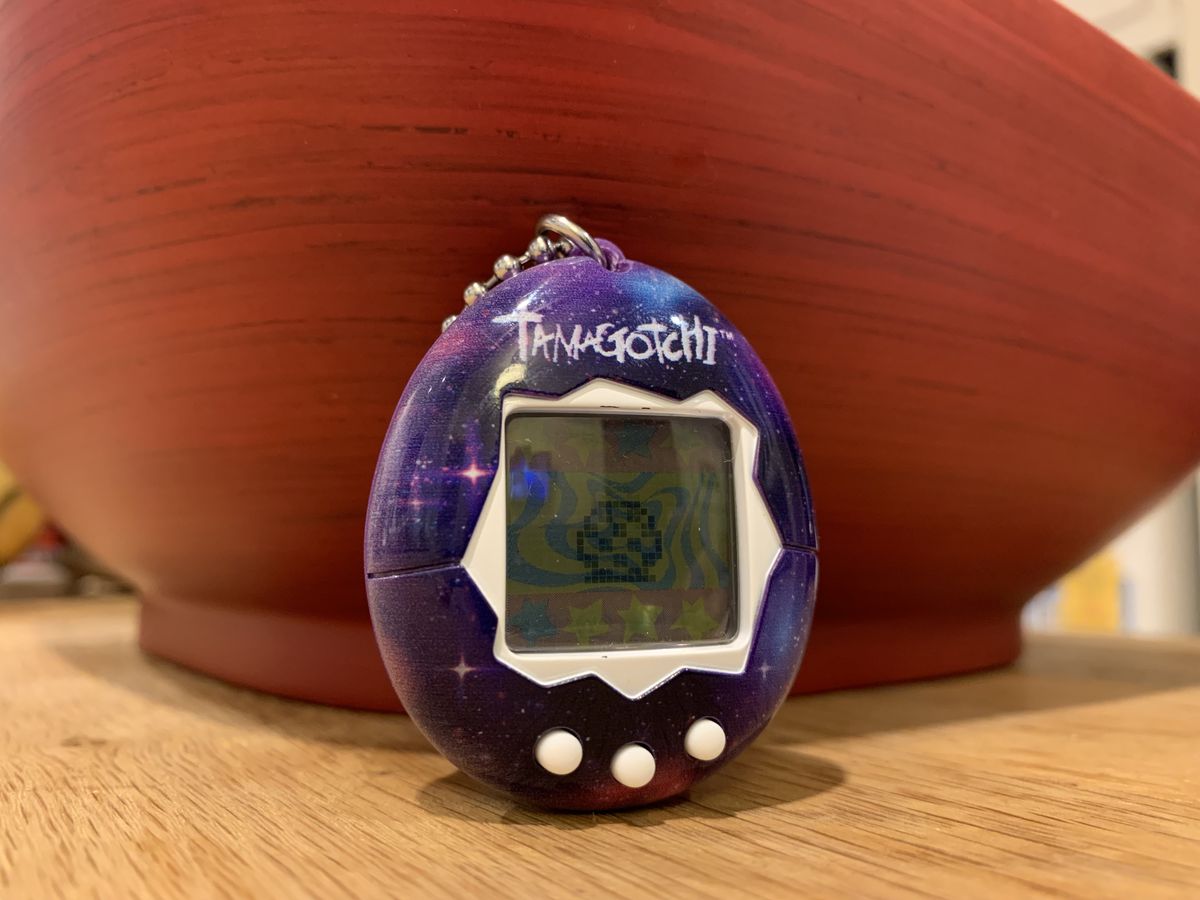 Bandai has brought back the original size and egg shape.

Back in the day, the Tamagotchi ushered in a wave of handheld toys that used non-backlit displays to recreate sports, favorite TV show characters, and, of course, pets. And even in this modern day of handheld devices with color touchscreens, little has changed about the Tamagotchi.

It’s still the iconic digital pet, and yep, it needs a lot of attention. In their prime, Tamagotchis didn’t have to compete with the constant pings of phones or smartwatches.

Bandai is still using a plastic build that’s outfitted in various finishes. There are several color choices across Gen 1 and Gen 2. I personally like the classic yellow color with some light blue accents, or the previously mentioned galaxy-themed Gen 2. It reminds me a lot of the galaxy-themed 3DS from Nintendo.

Gen 1 comes in all the original colors from 1997: purple with pink, translucent blue, rainbow, striped tiger, pink with yellow, white with black, red glitter, and a mermaid. Gen 2 has eight new colors including white and pink, black and silver, green glitter, leopard, blue with silver, yellow with blue, galaxy, and white with colorful characters.

Both feature a metal ball chain attached to the top of the egg, allowing you to attach it to your key chain or belt loop to keep it from getting lost. It also turns the Tamagotchi into a bit of a fashion statement.

Previous iterations of the Tamagotchi introduced smaller sizes and smartphone integration, but the Gen 1 and Gen 2 revert back to the original dimensions.

It’s an eye test for some 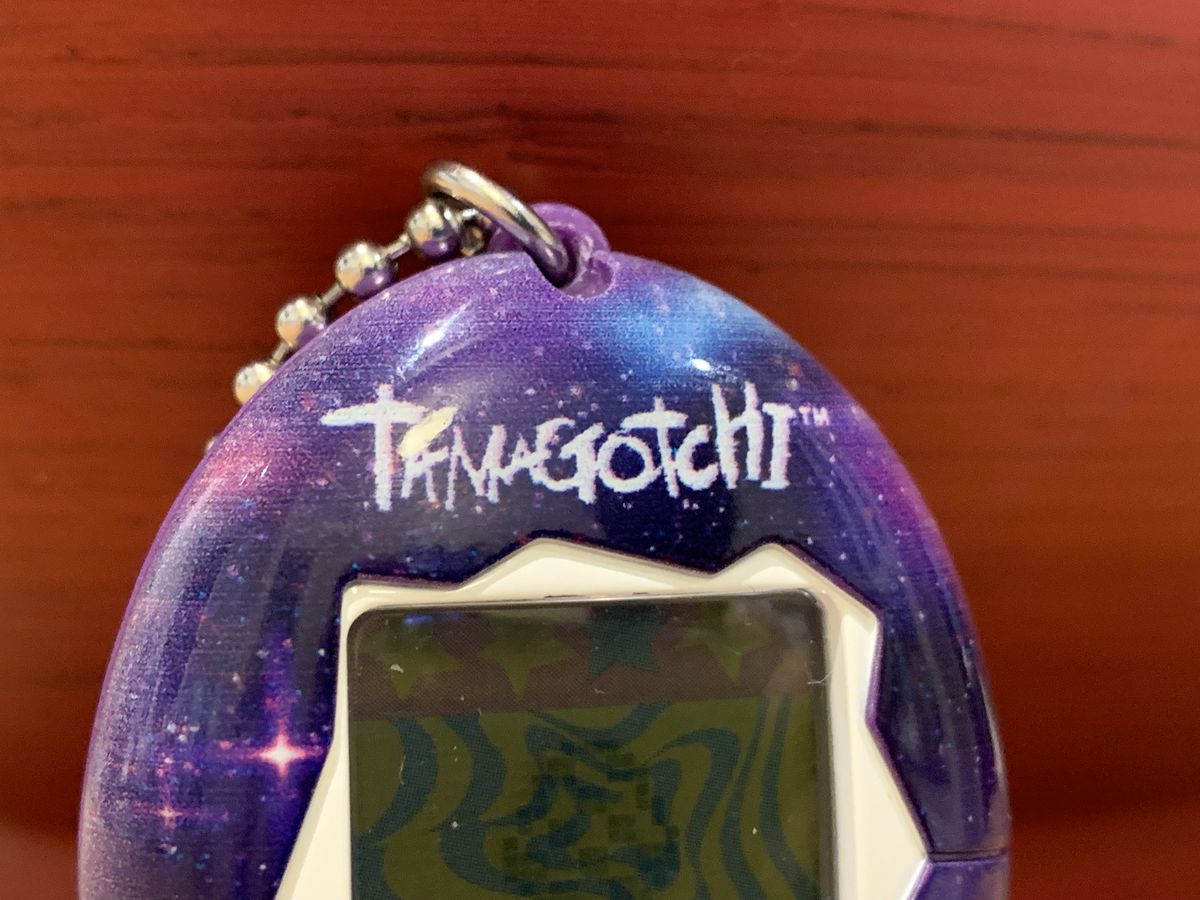 A slightly updated brand logo is above the display.

The Gen 1 and Gen 2 also keep the Tamagotchi’s classic non-backlit LCD screen, which is about the size of a quarter. It works well on this tiny device, but still seems a bit antiquated in the age of color touchscreens.

Don’t get me wrong: It’s certainly usable, and it doesn’t drain the battery the way a pixel-packed color screen would. However, I found it could be hard to see the screen clearly in direct sunlight or low-lit conditions.

The small screen can be a test for some eyes, though. I found myself squinting to play at times.

The pro side of this rudimentary screen is that battery life doesn’t take a hit, and you should even get an extended playtime thanks to the battery improvements. These 2018 Tamagotchis use a CR2032 battery, most commonly used to power watches and Tile trackers. When it comes to replacing it, you will need to pop off the back of the handheld and swap in a new one. 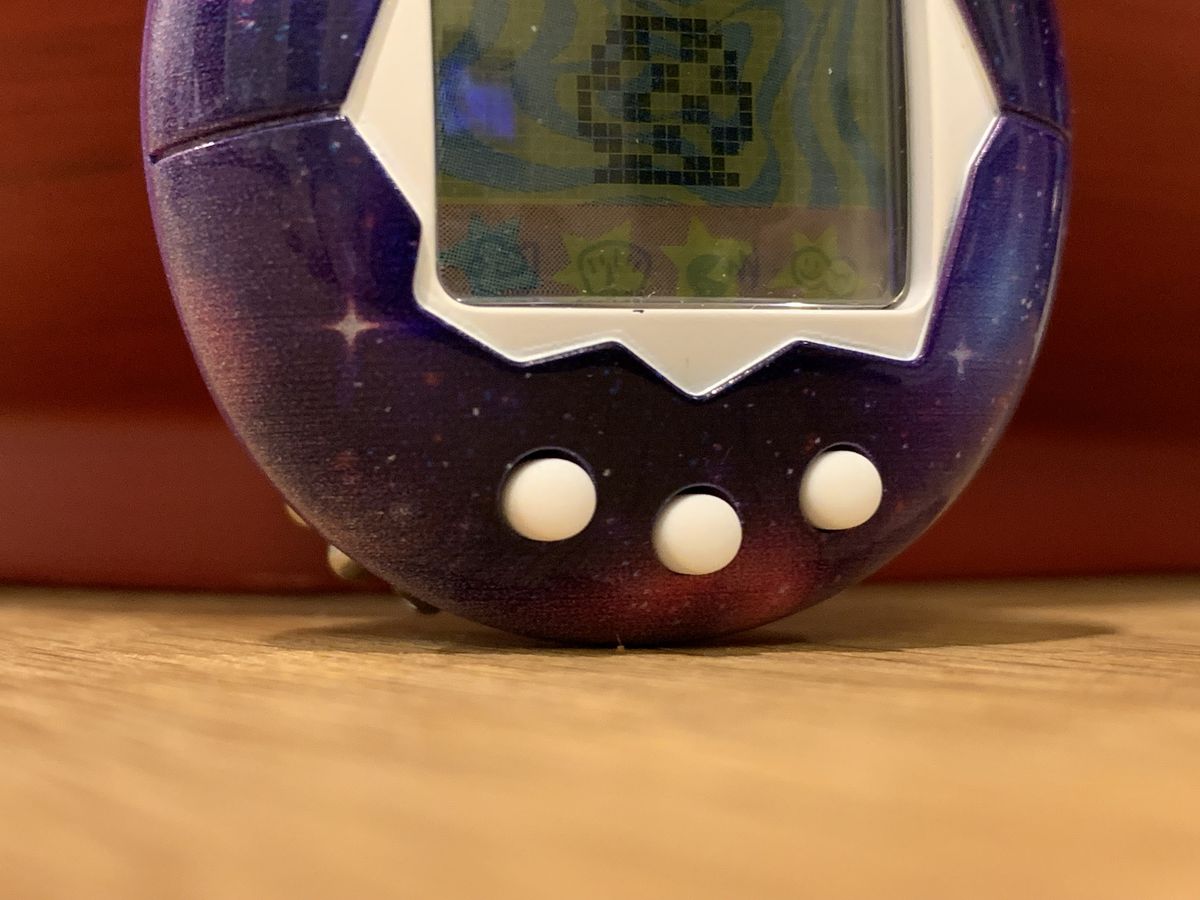 Three buttons below the screen are used to control the device.

Since the original Tamagotchi, other virtual pet games have added more connectivity, stronger hardware, and a more modern experience. For instance, many iOS tap games require you to frequently play them.

Once the egg-shaped game is out of the box, starting it up simply involves pulling a white tab out of the right-hand side. Once the device is turned on, you’ll see an egg appear on the screen (representing your unhatched animal), and you’re prompted to set the time. You can control the game using the three buttons, referred to simply as  A, B, and C, below the display. The buttons control various aspects of the gaming experience. For instance, when setting the time, A controls the hour, B controls the minutes, and C locks the time in.

One trick that I employed was to set the time a bit behind. That way, you have some time to get ready in the morning before your Tamagotchi hounds you for attention.

Once the unit is turned on, it takes 5 minutes for the animal to hatch. After that, your new friend will ping you every few minutes to take care of his or her needs. I recommend feeding the Tamagotchi first by selecting the knife and fork.

The Gen 1 and Gen 2 models are loaded with different games.

Gen 1 includes a game that involves guessing the direction the animal will move in. As the animal ages up, he or she will become better at stumping you. On Gen 2 you have a number guessing game, in which you’re presented a number from 1 to 10, and guess if the next number will be high or lower. This game is easier than the direction game of the Gen 1, since fewer choices means a better chance of winning.

Truthfully there is no way to game the system — both of these come down to chance. 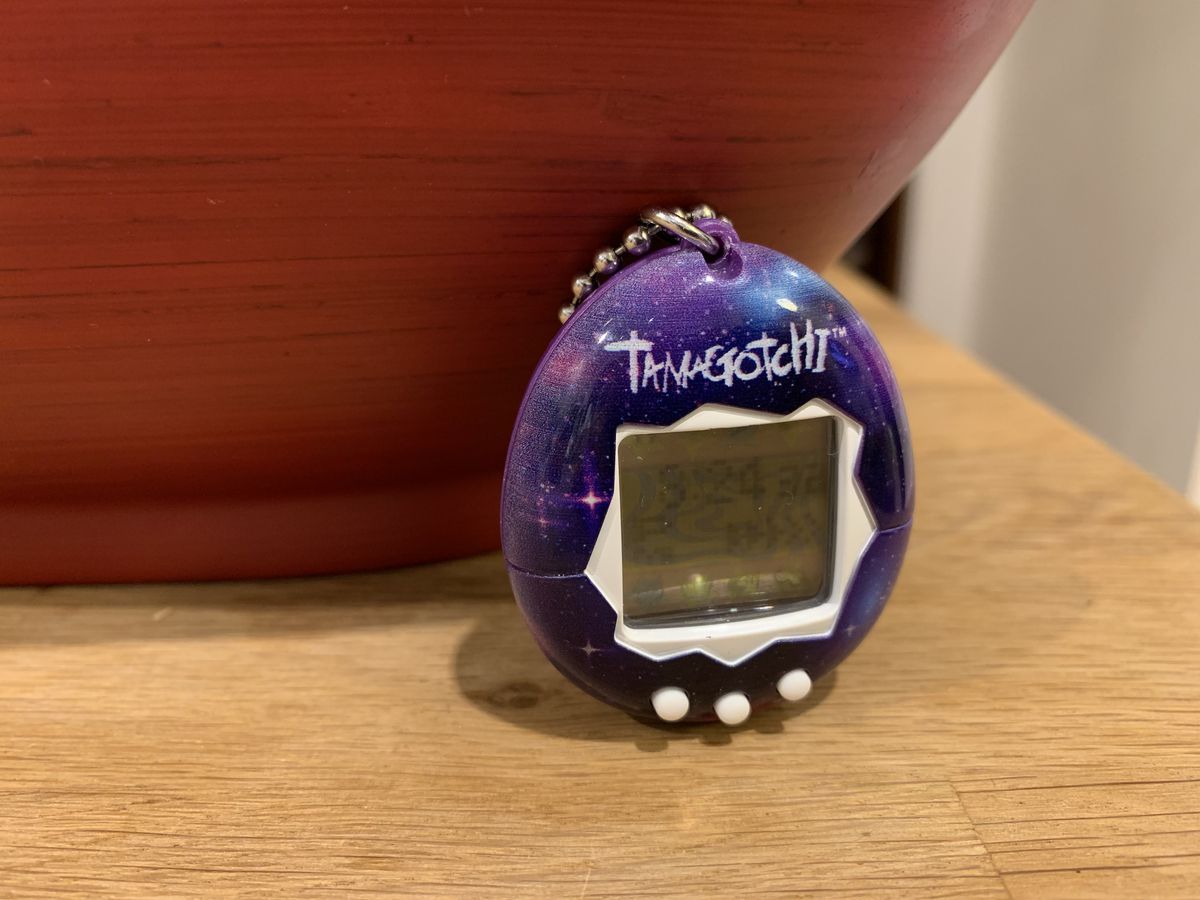 The Tamagotchi includes a chain that you can use to attach it to your key ring or belt loop.

With all of the pings that the Tamagotchi brings hits you with, it makes me feel like I have a pet. Along with that comes the anxiety of taking care of a “living” thing. I found myself continuously worrying about whether my pet needed food, to be played with, to have its poop cleaned, or to have the lights turned off. While you might get the feeling of guilt or anxiousness, the neediness of the Tamagotchi can also be an enjoyable time-waster.

At at easy-to-swallow $19.99, it’s a fun, addictive handheld game, even if it comes with a small side of anxiety. If you had a Tamagotchi or another virtual pet toy growing up, I think you’ll enjoy either Gen 1 or Gen 2. The nostalgia factor here is cool, especially given that you can pick the color of your original Tamagotchi. Throw in the eminently affordable price and you have this holiday’s perfect stocking stuffer. 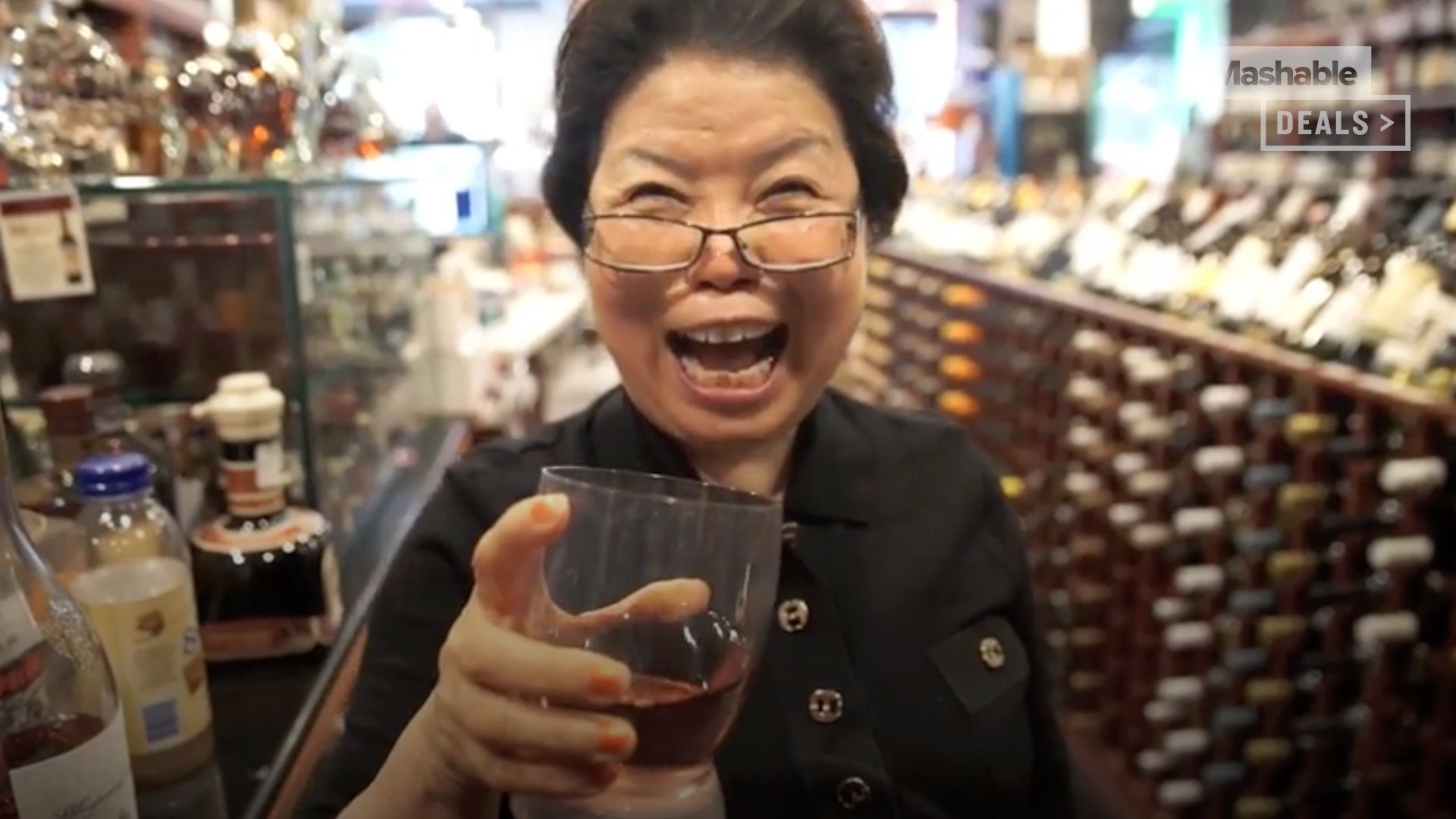