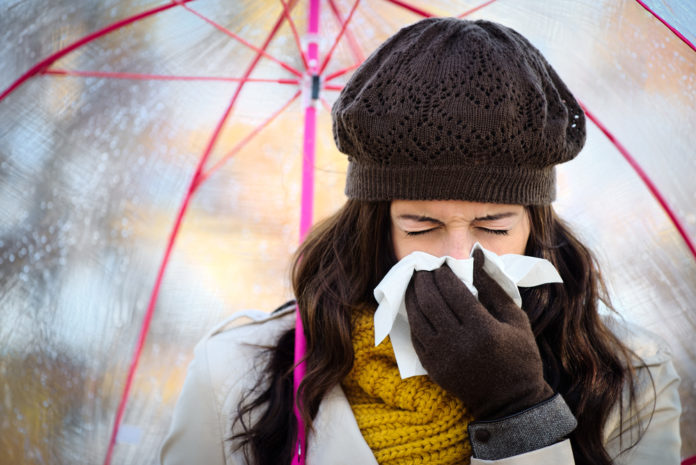 A researcher makes the case that all infectious diseases are seasonal. (Credit: Dirima/Shutterstock.com)

(Inside Science) — During the height of the polio epidemic in the U.S. in the 1940s and ’50s, parents often kept their children away from swimming pools, concerned that the disease, which peaked in the summer, was frequently spread through the water. But this fear couldn’t account for the summertime outbreaks around the world where public pools were not as common.

Then in 2001, Scott Dowell, a researcher from the Centers for Disease Control and Prevention, published a paper hypothesizing that humans’ susceptibility to the polio virus could be related to seasonal physiological changes, such as the seasonal variations in hormone secretions caused by changing sunlight patterns. The paper got Micaela Martinez, an infectious disease ecologist at Columbia University in New York, thinking: Maybe all acute infectious diseases are seasonal.

When Martinez started investigating, she thought she would find that acute diseases — those that come on rapidly and last a short amount of time, like the flu — would be seasonal, and that chronic diseases — those lasting longer and usually requiring ongoing medical attention, like HIV — would not be seasonal.

“But, there is documented seasonality for everything, and I was quite surprised by that,” she said.

Traditionally, disease seasonality was thought about in terms of transmission, Martinez noted. For example, measles peaks during the school months when children are packed together in classrooms, which allows the virus to spread. But for diseases like polio, the cause of the epidemic wasn’t as easily traced, and still isn’t entirely understood.

In a paper published today in the journal PLOS Pathogens, Martinez makes a case for looking at all infectious diseases as seasonal, although seasonal in this case doesn’t just relate to the traditional temperate seasons, like summer or fall. In fact, seasonality has four main drivers: environmental factors, like temperature and humidity, which impact seasonal flu; host behaviors, which are the main driver behind measles spread during the school year; ecological factors, such as algae blooms, which play a role in the outbreak of cholera; and seasonal biological rhythms, such as changes in circadian rhythms, which may make individuals less or more susceptible to infections.

To create a calendar of epidemics, Martinez collected information from the World Health Organization, the U.S. Centers for Disease Control and Prevention, and peer-reviewed publications. She looked at 69 infectious diseases, including commonplace infections and rare tropical diseases, and described the seasonal characteristics outlined in the literature, making careful note of geographical differences. This method allowed Martinez to identify and highlight the seasonality that had already been documented in many diseases, although she noted that further research is needed to understand the drivers for each disease.

That task is not always straightforward. The transmission dynamics for disease are very complex and include many interconnected factors, said Dennis Bente, a microbiologist and immunologist at the University of Texas Medical Branch in Galveston, who studies tick-borne viruses.

Still, he thinks the paper does a good job in highlighting the role of seasonality and also prompting other researchers to look more closely at seasonal drivers in the diseases they study. “I think it’s a really interesting paper,” he said.

A better understanding of seasonal drivers may lead to better public health intervention to contain the spread of diseases, or to even eradicate some diseases entirely, Martinez argued.

During certain times of the year certain pathogens hit population low points, called troughs, which may make them more susceptible to being wiped out by vaccines or other interventions, like bed nets for malaria. Understanding if the low period is a result of environmental factors versus increased host resistance could also help public health workers to target their campaigns more effectively. “There’s really an opportunity to take advantage of the seasonality,” Martinez said.

[This article was originally published on Inside Science.]