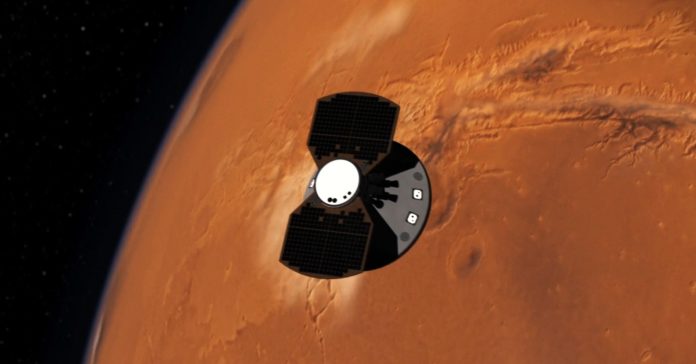 After a six-month journey across hundreds of millions of miles of deep space, NASA’s InSight spacecraft—a mission nearly ten years and close to $1 billion in the making—landed successfully on the surface of Mars on Monday, touching down on the planet’s surface just a few minutes before 12:00 pm PT.

In the final moments of the spacecraft’s descent, the mission control room at NASA’s Jet Propulsion Laboratory was silent as updates on InSight’s status blared over the PA system: “Altitude 300 meters… 200 meters… 80 meters… 60 meters … 50 meters, constant velocity 37 meters… 30 meters … 20 meters… 17 meters… standing by for touchdown… Touchdown confirmed! InSight is on the surface of Mars!” Immediately, the engineers in mission control burst into applause.

News of the successful touchdown was delivered to Earth via two briefcase-sized communication satellites named Mars Cube One-A and Mars Cube One-B, which accompanied InSight on its journey to Mars and monitored the spacecraft from high above the planet. The two “CubeSats” are the first of their kind to make the trip to deep space. On past missions to Mars, updates on a mission’s status have been relayed to Earth by spacecraft stationed in Martian orbit, such as the Mars Reconnaissance Orbiter. InSight, however, did not have an orbiter in position to forward information on its entry into Mars’s atmosphere, descent to the surface, and ultimate landing. Instead, InSight brought its own, mission-specific communications relay, in the form of MarCO-A and B. The tiny satellites’ performance today hints at how spacecraft going forward could phone home in near real-time from faraway planets, even in the absence of a permanent orbital outpost like MRO.

According to the MarCO telemetry, InSight deployed its parachute, activated its radar, detached from its backshell, activated its 12 descent engines and landed on the planet — all, it seems, according to plan. “Flawless… flawless,” said Rob Manning, chief engineer at NASA’s Jet Propulsion Laboratory, over the cheers of his colleagues. “This is what we really hoped and imagined in our mind’s eye. Sometimes things work out in your favor.” He added that InSight’s engineers will spend the next hours and days reviewing the landing data, to see just how well it went. But as of right now, he said, InSight’s landing was as close to perfect as his team could have expected.

Within minutes, the CubeSats had also relayed InSight’s first photograph of its surroundings on Mars. Conditions looked… dusty, with flecks of Elysium Planitia (InSight’s landing site and home for the duration of its mission) obscuring a view of the Martian horizon:

But InSight’s mission planners were anticipating dust. Now, the lander must wait for that dust to settle—literally—before unfurling its solar arrays, which it will use to power its mission on Mars.

MRO and the MarCO satellites will be out of range by the time those solar arrays are fully deployed, which means we’ll have to wait another four or five hours for updates on their status. For now, though, all appears to be well with InSight. “The lander is not unhappy, it’s not complaining, it’s in a normal mode, so it’s going to chug along for the rest of the afternoon and finish its activities,” Manning said.

Learn More About the InSight Mission