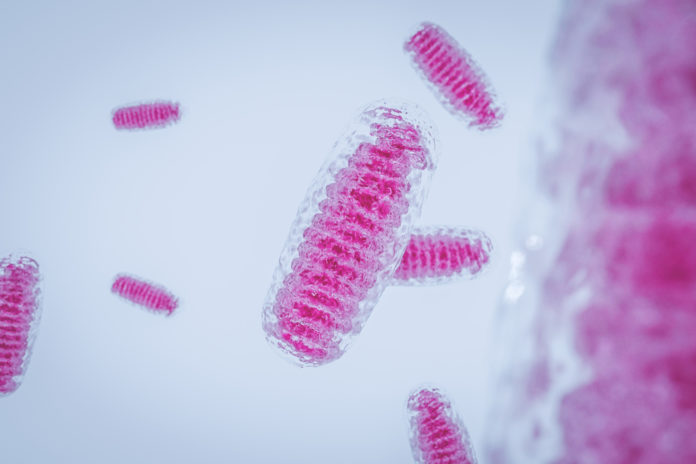 An illustration of mitochondria. A new study finds mitochondrial DNA can also come from the father, in some cases. (Credit: CI Photos/Shutterstock)

If you think way, way back to your high school biology class, you might remember a little cellular structure called the mitochondrion. Its claim to fame is that it’s the “powerhouse” of the cell — the organelle in charge of creating energy. But it also contains its own DNA, separate from the traditional DNA we think of, which lives in the nucleus of a cell. That nuclear DNA contains genetic information from both of our parents. But in mitochondrial DNA (mtDNA), that genetic information only comes from one parent.

In some organisms like algae and plants, males are the ones who pass on their mtDNA. In humans, however, this genetic information pretty much always came from mom. Well, until now, it seems. In a paper published in PNAS this week, an international team of researchers reveal they’ve found evidence of paternal mtDNA in 17 people from three separate families.

Not Just Your Mom’s Genes

It all started with a four-year-old boy. He’d been experiencing fatigue, muscle pain and muscle weakness. His doctors suspected he might have a mitochondrial disease, in which the cellular structures slowly stop producing energy. So the boy’s doctors at Cincinnati Children’s Hospital Medical Center (CCHMC) sent his blood off for analysis.

It was then that the paper’s lead author, Taosheng Huang, the director of mitochondrial medicine at CCHMC, noticed something was off. To make sure they weren’t making any mistakes, Huang and his CCHMC team gave more samples of the boy’s blood to other labs. But those independent analyses came back with the same results — the young patient had paternal mtDNA mixed in with the usual maternal genetic information.

The unexpected results led Huang and his team to hunt down other people who might have the same anomaly in their cells. It turns out at least four people from different generations in the boy’s family have significant levels of both maternal and paternal mtDNA. And two other families each had members of multiple generations harboring biparental mtDNA.

More Than a Fluke

Researchers still aren’t 100 percent sure why mom’s mtDNA usually wins in the genetic battle of inheritance. They do know that, at least in simplistic animal models like the nematode Caenorhabditis elegans, sperm cells contain a self-destruct gene that kicks in when they fuse with an egg. The gene marks the mitochondrial genetic info for destruction. (When researchers deleted that gene, paternal mtDNA survived longer in the offspring. But in turn, that meant higher rates of death for the embryos that carried that paternal mtDNA.)

No one’s quite sure if this happens in humans yet, but it’s still practically unheard of for paternal mtDNA to pop up in humans. There’s only been one other promising case from 2002. Researchers reported in the New England Journal of Medicine that a male patient had significant levels of paternal mtDNA in his cells — and another team was able to verify the results. However, no other instances had turned up since, leading many experts to believe the findings were a fluke.

But that Huang and his team have found the phenomenon in multiple generations in multiple families shows this isn’t just a fluke. Though the authors note there’s still a lot left to suss out — like how paternal mtDNA survives in the first place, and how exactly it’s passed on genetically — the results offer a new avenue of research that many didn’t think was available. The knowledge could help scientists better understand the complexity behind mitochondrial diseases.

GizmoCrazed - September 28, 2011 0
According to a recent survey by Nielsen, majority of the new smartphone users prefer Android devices over other OS powered smartphones. The survey says that...

This Is What You Need To Check Next Time You Buy...