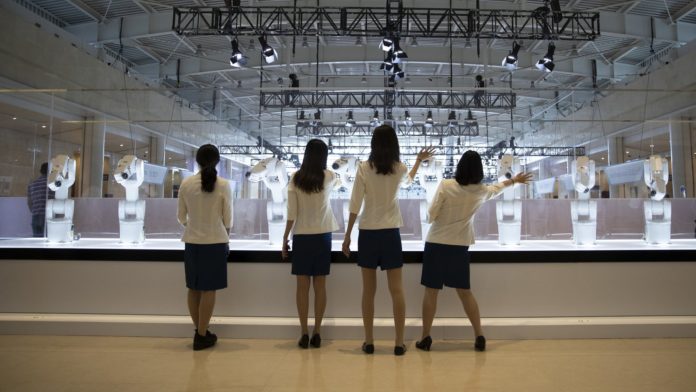 When I pick up my iPhone and tell it do something, it feels natural. That’s much of the appeal behind Apple devices — the intuitiveness of their interfaces makes it easy for us to translate human thoughts into the language of a machine.

The machines in Madeline Gannon’s latest project sit at the other extreme of this spectrum. The industrial robotic arms are hulking, blocky beasts that gleam in a most un-lifelike way. Their bodies are essentially one long arm, articulated to give the robots a range of motion no living creature could achieve.

Gannon, a roboticist and artist, unveiled Manus at the World Economic Forum’s 2018 Annual Meeting of New Champions in Tianjin, China. The project is exploring ways to imbue machines with movements and behaviors that feel more natural to us, and which could help put humans at ease around our mechanical compatriots.

Brought to life by custom-designed software and assisted by camera vision, the 10 machines move in a pattern of probing, inquisitive movements that feels both unsettling and familiar. As interlopers walk by, the bots’ focus jumps from person to person, heads bobbing and probing in every direction. If you didn’t know better, you might say they were a pack of curious animals.

Unlike our smartphones, many of the machines that populate our world today aren’t made with human interactions in mind. They are bluntly utilitarian; tools, not friends.

But Gannon imagines a not-too-improbable future where robots fill our sidewalks, roads and offices, carrying out their own tasks. We wouldn’t have control over them — a possibility that’s fostered a sense of division, and sometimes fear, regarding robots.

Engineers’ attempts at humanizing them hasn’t really worked to quell that fear, either, Gannon says.

“Oftentimes the solutions they come up with is ‘well let’s put eyes on the robot, let’s put an iPad on to the end of it and have it look where it’s going to go,’” she says.

But those attempts to make more human-looking robots have so far ended up squarely in the Uncanny Valley — a space filled with bots and avatars that were built to appear human but only succeed in becoming more frightening because of it. The solution, Gannon suggests, is to avoid trying to be human altogether.

So when she was designing Manus, she looked to the animal kingdom for inspiration. The shift allows her to add in little bits of personality and motion that work to telegraph a robot’s internal state. These familiar signals could help ease fears about a robot’s intentions, Gannon suggests.

“One amazing thing about industrial robots is that they look nothing like people … but if you begin to move them in the right way and have them be responsive in ways that are perhaps more animalistic than anthropomorphic, you can broadcast that same level of intent out into the world.” she says. “Their posture, the way that they move and even the sound of their motors can be helpful to give cues or to grab attention or to communicate intent to the people around them.”

Hence the robotic arms that bob and sway, or perk to attention like a dog whose name has been called. These biological motions aren’t at all natural to a robot, but they are integral to our own systems of understanding the world.

Learning to Love the Machines

You get the sense Gannon is already a step ahead of us when it comes to relating to machines. The notion of robots as living, if not breathing, creatures permeates her vocabulary when she talks about them. She thinks of them as “creatures, not things,” refers to them as having “body language,” and populating different “robot ecologies.” It’s a conscious attempt to reframe them as more lifelike.

Those comparisons seem odd today, but there may come a time when we’ll need to question whether robots deserve to be called beings like us. The emergence of robotic consciousness is far off, but in the meantime, we need only look to the fleets of autonomous cars cruising the streets of cities across America to see that self-reliant robots are becoming part of the everyday. 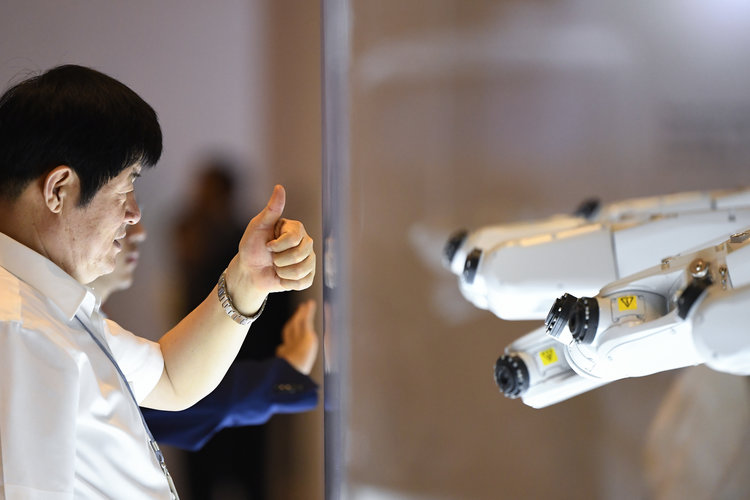 As machines move from factory floors to city streets, there will undoubtedly be an adjustment period. The prevailing view of robots that the entertainment industry has put forward — inhuman and menacing — won’t help their transition into our daily lives; but Gannon is optimistic that we’ll eventually come around. We can start, she says, by remembering to keep our minds open.

“Industrial robots, in particular … have become this symbol of everything we should fear about technology in our future,” she says. “For me, I just want to show that there are many alternatives to the future. We don’t have to head towards this one we all agree we don’t want. We can explore many diverse options for our relationship to these intelligent machines in the future.”

GizmoCrazed - June 21, 2016 0
The next SpaceX commercial cargo resupply services mission for NASA to the International Space Station now is targeted for launch no earlier than 12:45...

Is Owning An Electric Car Worth The ‘Hassle’?