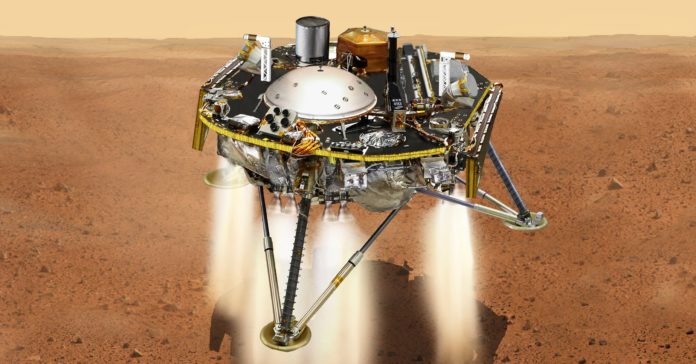 There’s really no way to rehearse landing on Mars. You can simulate it, sure, but the most valuable lessons are learned during actual attempts. When things go poorly, those lessons are also the most expensive. The fact is, most missions to Mars don’t make it, though NASA has a better track record than most. The agency has executed seven successful touchdowns on the red planet. On Monday, November 26th, it will attempt its eighth, when it endeavors to land the $830-million InSight spacecraft on Elysium Planitia, a vast plain just north of the Martian equator.

If NASA is successful, InSight (short for Interior Exploration using Seismic Investigations, Geodesy, and Heat Transport) will be the first mission to investigate Mars’ deep interior with thermal probes and seismometry, an approach scientists think will address questions about the red planet’s formation and composition. But first, the spacecraft must land. To do so, it will have to endure an atmospheric entry multiple times the speed of sound, weather violent sandstorms, and avoid being crushed by its own jettisoned equipment. Getting to Mars is hard, but NASA engineers consider entry, descent, and landing—the seven-minute period in which mission planners are helpless to intervene, due to the tremendous distance between Mars and Earth—the riskiest sequence in the entire mission. Here’s how NASA plans to pull it off.

For InSight, the action will begin Monday, November 26th at around 11:47 am PT (2:47 pm ET). That’s when the lander is slated to hit the top of Mars’ atmosphere, at an altitude roughly 43 miles above the planet’s surface. On contact, the spacecraft will be blazing along at a not-so-cool 5500 meters per second. That’s 12,300 miles per hour.

At those speeds, the primary concern for NASA’s engineers is friction. Mars’ atmosphere, which is roughly 100 times thinner than Earth’s, plays a vitally important role in InSight’s arrival: Bleeding the spacecraft of its kinetic energy. Yet the atmosphere poses a significant threat, as well. The resistance it exerts on InSight’s heat shield, a 419-pound enclosure composed primarily of crushed cork, will drive the temperature of the protective barrier to temperatures greater than 2,700 degrees Fahrenheit—hot enough to melt steel.

Those temperatures will top out some 90 seconds after InSight detects the top of Mars’ atmosphere, at approximately 11:49 am. Around the same time, InSight will experience its peak deceleration forces, with magnitudes approaching 8 times that of gravity here on Earth. For reference, people subjected to as little as 4 gs can lose consciousness in a matter of seconds. InSight may well experience its own version of a blackout: The heat at this point of atmospheric entry will be so intense, NASA engineers anticipate that it could ionize gas around the spacecraft, leading to temporary interference of its radio transmissions to Earth.

So begins InSight’s descent toward the Martian surface. In the two minutes that follow, InSight will continue to decelerate until onboard sensors determine it is safe to deploy the spacecraft’s supersonic parachute.

Depending on local weather conditions (sandstorms are common on Mars this time of year—another eventuality accounted for by InSight’s heat shield), the chute, which measures 39 feet in diameter and is tethered to the spacecraft by 40 suspension lines, should deploy around 11:51 am. Ten seconds later, the spacecraft’s landing radar will begin to come online.

What follows is a series of carefully orchestrated steps that are essential to the lander dropping weight as it prepares to touch down. In the first 25 seconds of its parachute descent, InSight will jettison its heat shield and deploy its three shock-absorbing legs in preparation for landing. Ninety seconds later, the spacecraft will begin using its radar—now fully activated—to gauge its proximity to the Martian surface and the speed of its approach.

The final minute of InSight’s arrival on Mars will be marked by the shedding of still more equipment. Forty-five seconds before touchdown, the spacecraft should be descending at approximately 134 miles per hour. At an altitude of two-thirds of a mile, as determined by its radar, InSight will separate from its parachute and, a second later, begin firing a dozen descent engines. Onboard navigation software will enable those engines to pull quadruple duty by directing their thrust to slow the lander’s descent, guiding it toward its landing zone, and orienting it such that its solar arrays extend east-to-west—all while keeping it well out of the way of its previously discarded, and imminently incoming, shell and chute.

In the final fifteen seconds, InSight will descend from an altitude of 164 feet, all the while slowing its vertical speed from 17 to 5 miles per hour: its touchdown velocity. That final plop, which should occur around 11:54 am PT, is responsible for compressing InSight’s shock-absorbing legs, thereby activating sensors at the tops of its struts. Triggering those sensors cuts the lander’s retrorockets and send two signals—one to indicate that the robot has landed, and a second, seven minutes later, to communicate that the robot is functional.

Then, assuming all has gone well up until this point, comes celebration; InSight won’t begin doing any science until several weeks later. First, NASA engineers will need to use a camera, attached to InSight’s 8-foot-long robotic arm, to survey its surroundings and determine the ideal spot to place its two primary scientific instruments: a self-burrowing heat probe and a suite of quake-sensing seismometers. Once they’ve decided where to put them, they’ll use a five-fingered grapple at the end of the arm to lift the research instruments from InSight’s deck (a shelf, basically, attached to the lander), lift them into the air, and place them onto the planet’s surface—a maneuver one of InSight’s payload systems engineers described to me as similar to the claw game you play at the arcade, except millions of miles away.

Fortunately for them, InSight’s operators will be able to practice the claw game at JPL’s In-Situ Instrument Lab in Pasadena—a life-sized mockup of the lander and its landing site that mission planners will use to perfect their control of the robot before beaming instructions into deep space. There may be no way to rehearse landing a robot on Mars, but at least InSight’s engineers will be able to rehearse this.

23 Hilariously Stupid Things That Ever Happened

Can a New Kind of Consumerism Help Fight Climate Change?

Live From The Berlin Marathon: You Can't Outrun Bad Weather