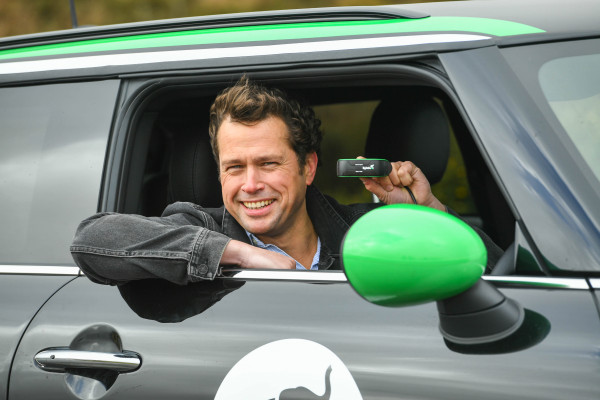 Former Dyson CEO Martin McCourt also contributed to the investment, and will join Lightfoot’s board as a non-executive chairman.

The startup has previously received grant funding from government-backed Innovate UK and later an innovate loan. But this looks to be their first tranche of VC. And a spokesperson confirmed it’s being treated as a Series A. A spokesperson has now told us it is actually a Series C.

Lightfoot’s telematics device, which it bills as a sort of “Fitbit for cars,” plugs into a vehicle’s onboard computer and rests on the dashboard — where the driver can easily see the visual cues it provides as they drive (using a traffic light color-coded feedback system).

The idea is to offer a more reciprocal alternative to traditional “blackbox” telematics systems, which just record driving data and don’t give the driver an opportunity to improve their driving.

Smoother driving is linked to reduced fuel consumption, lower emissions and a lower risk of accidents. So there are plenty of reasons why fleet owners — Lightfoot’s initial target for the tech — might want to encourage it.

On the driver side Lightfoot combines real-time feedback with a rewards platform that offers individual incentives, such as lower insurance premiums and deals-related discounts on things like restaurants, holidays, days away and retail.

It uses a gamification approach here, with a so-called “Elite Driver” status being needed to unlock rewards. A driving score of 85 percent is required to reach that status. Lightfoot says 80 percent of its users hit the mark and are able to remain there, while 97 percent achieve Elite Driver status “at some point.”

The company was launched in 2013 by entrepreneur Mark Roberts, and now has more than 20,000 drivers using the tech across more than 150 fleet clients — including Virgin Media, Dixons Carphone, Southern Water, Ecotricity, Greencore and Dyno Rod.

It’s opening up to individual motorists with a U.K. consumer launch today, and plans to expand the proposition globally being slated as “already underway.”

It says the new investment will be used to feed these growth plans, including ramping up hiring across the business.

Commenting in a statement, Ned Dorbin, BGF investor and new Lightfoot board member, said: “Lightfoot is a vibrant, smart and ambitious business with a first-class management team. After five years of operation, they have established a strong reputation in the market and developed a clear strategy for growth.”

“We’re on a mission to change the way people think about driving. And to make it fun again,” added Lightfoot’s founder and CEO, Mark Roberts, in another supporting statement. “We want everyone to enjoy the amazing benefits that smoother driving can have on their wallets and our planet.

“So far, we’ve created a community of Lightfoot drivers who are earning better deals for better driving – now, we’re excited to grow this with more like-minded motorists who believe good driving deserves rewarding.”