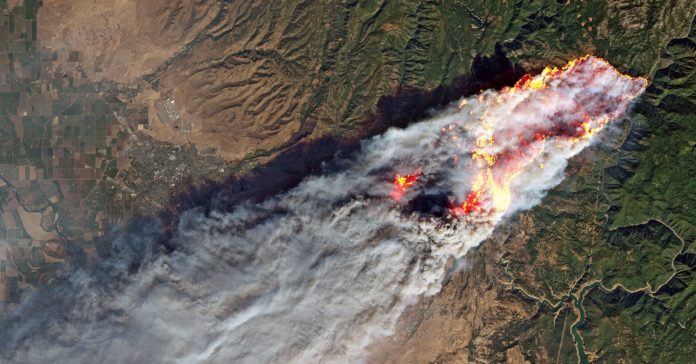 Not for the first time this year, Californians this week donned face masks to protect their lungs from the harmful airborne particles that have smothered the state in a sickly, sooty haze. The pollutants are products of three devastating infernos raging hundreds of miles apart, the largest of which, Butte County’s Camp Fire, has swelled to become the deadliest and most destructive in state history. They join the more than 7,500 California wildfires that have this year consumed nearly 1.7-million acres of land—more than any fire season on record. The increasing intensity of California’s blazes has many residents of the Golden State wondering: Is the smoke from wildfires also getting worse?

That’s a complicated question. On one hand, data suggests California’s fires are burning hotter and consuming more land than they did in the past. “If you use intensity as a proxy for pollution—that is, if you assume stronger fires will produce more emissions like smoke—then by stint of that, yes, there ought to be more smoke,” says atmospheric composition scientist Mark Parrington.

A senior researcher at the Copernicus Atmosphere Monitoring Service, Parrington tracks wildfires around the world to better understand their effect on pollution and public health. Most mornings he’s in his office by 8 am, downloading the previous 24 hours’ worth of fire data from a supercomputer operated by the European Center for Medium-Range Weather Forecasts. The data—thermal infrared radiation measurements from NASA’s MODIS instrument—allow him to estimate the intensity of fires burning around the world; how many emissions (like lung-aggravating aerosols and greenhouse gasses like carbon dioxide) they’re pumping into the atmosphere; and how those emissions affect global air quality. From his office in Reading, just west of London, he’s kept closer tabs on California’s current wildfires than most. “You really don’t expect to see emissions of this magnitude, this late in the year,” Parrington says. “Even on a global scale, it really stood out.”

Parrington also compares each day’s emissions data to past measurements, which is how he knows that California’s current wildfires have pumped more schmutz into the atmosphere than any November blazes on record. In fact, this year’s California wildfires have produced more emissions than all but 13 of the past 16 years. “It’s not just the Camp Fire, but the wildfires from this summer,” Parrington says. “The Carr Fire, the Mendocino Complex Fire—they’ve been devastating.” If the state sees any major wildfires in December (the way it did in 2017), 2018 could become the year with the highest emissions ever recorded for California.

And yet, the question of whether smoke is getting worse is more complicated than many people realize. That’s because smoke itself is pretty complex. For starters, it contains well beyond the 40 different “pyrogenic species” Parrington says his analyses account for, which include various forms of carbon, and toxic aromatic compounds like benzene and toluene. The relative and absolute quantities of said species can vary considerably, based on the conditions of the burn—like whether it’s wet, dry, or has burned in the past. “All of these factors contribute to how much of those fire emissions get turned into smoke and how the pollutants interact with each other,” Parrington says.

Determining how much smoke is actually in the atmosphere, let alone entering people’s lungs, is also challenging. Parrington says it requires understanding how smoke interacts with large scale weather conditions like wind, ground temperature, air temperature, and cloud cover. In the Bay Area, for instance, high pressure atmospheric systems tend to produce inversion layers that, like a lid on a shallow pan, keep smoky air close to the ground. Determining the region’s air quality has to do not just with the absolute quantity of smoke, but how much of it is is trapped at ground level.

There’s also fuel sources to consider, variations in which produce different kinds of smoke. “The fact that more fires are happening at the wildland urban interface means that fires are encountering new materials,” says Jessica McCarty, a geographer at Miami University specializing in fire-related air pollution.

When it comes to fuel, McCarty says, fires are agnostic. If it’s hot enough, it doesn’t care if it’s a tree, a house, or your car. But as a rule of thumb, the emissions emanating from a burning shrub are less caustic than those of a burning Subaru. “Wood is far from clean, but it’s nothing compared to something like burning rubber, which is downright toxic,” McCarty says. Which is why, as people build deeper and deeper into wildland areas, the relevant question isn’t just how much pollution these fires producing, but what kind of pollution they’re producing.

Answers to both questions, Parrington says, could be found in computational systems like the Copernicus Atmosphere Monitoring service, which is capable of taking many of these variables into account and synthesizing the data across multiples wildfire seasons. CAMs has only been operational for three years, but the data it collects is openly available to scientists around the world who are increasingly interested in nuanced questions about wildland smoke.

For residents of California, answers to those questions can’t come soon enough. In the meantime, hang on to any extra air masks you have lying around—there’s no telling when you might need them again.

Samsung Plans To Sue Apple As Soon As The iPhone 5...

GizmoCrazed - September 19, 2011 1
The on-going patent war between Apple and Samsung Electronics continues as Korean Times reports that Samsung is going to take the U.S. based company to court...

Nextdoor CEO is stepping down