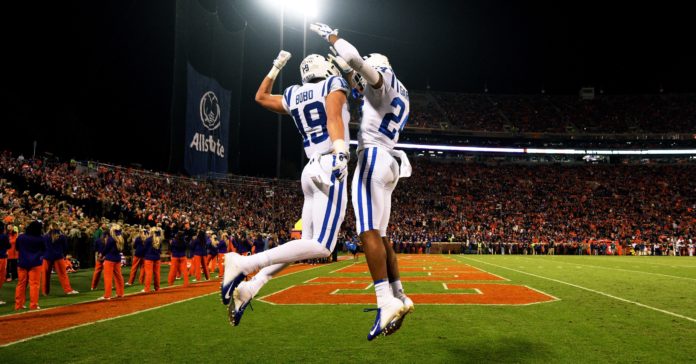 Few things herald Thanksgiving as loudly as turkeys, flight delays, and long hours in front of the TV watching football. It’s an important time in the football calendar, with the playoffs beginning to shape up for both college football and the NFL.

But what about those impacts? I don’t mind watching football, but there’s no way I’m going to take one of those hits. When I see some of these epic tackles, I can’t help but think about physics.

There are some great tools available so that we can analyze the physics of a football hit. Really, we have everything. the masses of individual players? Yup—just search the roster and you can look these things up. Video analysis tools? Again, yes. Personally, I really like Tracker Video Analysis. There’s just two more things we need for a full analysis. I need the video frame rate, but this is trivial. Although some impacts are replayed in slow motion, they are also shown in real time. What about a distance scale? Oh wait! It’s right there on the field with the yard lines. We are all set.

Let’s start with a collision. I just did a search for “biggest football hits” and quickly found one that would work. In this case, I am going to look at the Clemson vs. Syracuse game from 2017. The play has Clemson wide receiver Trevion Thompson (205 lbs) tackled by Parris Bennett (216 lbs) from Syracuse.

I like this collision for two reasons. First, the motion is mostly up and down the field and not side to side. This means that the camera gets a side view of the motion and they line up with the yard lines for easy measurement. Second, Bennett actually lifts Thompson up and pushes him back. That looks cool.

Now, there is one small problem. The camera zooms in and pans. This means that the location of the origin changes with respect to the view of the camera and the pixel-to-meter ratio changes. Fortunately Tracker Video Analysis has a nice method to account for this camera motion—the calibration point pairs. Basically, you set the scale of the video and then track two points on the background. The app then adjusts the virtual coordinate system so you can mark the real locations of the two players. Here is the resulting view from that transformation.

Next, I just need to mark the location of both players in each frame. Here’s what I get.

Since these are position-time plots, the slope of the line will give the velocity of the player. Here is what I get. I’m using units of meters per second because I’m not a barbarian.

Great. But what can we do with these values? The answer is “more physics.” Let’s start with the momentum principle. This says that the total force on an object (or football player) is equal to the rate of change of momentum. But what is momentum? It’s the product of mass and velocity (represented by the symbol p). In fact, I can write the momentum principle in terms of the change in momentum like this:

Yes, momentum and the net force are both vectors. In this case we are just dealing with one dimension so it’s not really a big deal.

There is another key physics idea here: forces are an interaction between two things. When Bennett hits Thompson, it’s not just a one-way force. In fact, Thompson pushes back on Bennett with an equal and opposite force. It’s not about Thompson, it’s about the nature of forces. If Bennett hit a brick wall, the wall would still push back with the same force. During this interaction (also known as a hit) the two players have equal and opposite forces—but they also have the same time interval. Bennett can’t push on Thompson for a different amount of time that Thompson pushes on Bennett. Since they have the opposite force for the same time, this means that they have opposite changes in momentum. Or better yet, the total momentum before the collision is equal to the total momentum after the collision. This is the conservation of momentum.

OK, let’s write this as a one-dimensional equation in the direction of motion. I’m going to call the direction that Thompson starts off moving as the negative direction. That means that the conservation of momentum can be written as:

I have the values for the initial and final velocities as well as the masses (convert to kilograms). I can check this. Based on the data, the initial momentum (remember one of them is negative) would be 469.5 kgᐧm/s and the final momentum would be 579.1 kgᐧm/s. Yes, those aren’t quite the same but they aren’t super far apart. Here are the calculations (and more). You can change the numbers and press “play” to recalculate for fun (and you should). Yes, python is an awesome calculator.

I can approximate the contact time at around 0.2 seconds, then the external force on the system would have to be 548 Newtons (that’s 123 pounds for barbarians). But wait! This is the force on a system consisting of both players. If we just look at Bennett, he has to push on the ground with a greater force to compensate for the force that Thompson pushes on him. I can find that Thompson force by looking at his change in momentum in that same time interval. This gives a leg-pushing force of 2577 Newtons. Yes, that seems crazy high but it’s less than three times his body weight. Humans can easily achieve those super high forces for short times (see running as an example).

If you want some homework, here is something to try. Find another collision—one in which both players are off the ground during the collision. If both humans are off the ground then there would be no forward force. Momentum should be conserved. See if the numbers work. It will be fun.