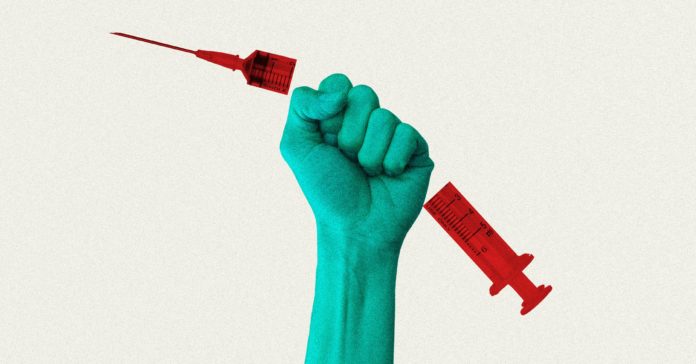 In early 2015, Sen. Ervin Yen, an anaesthesiologist who became Oklahoma’s first Asian American state legislator, introduced a bill to require all schoolchildren to be vaccinated, unless they had a medical reason not to. California had recently debuted similar legislation after an outbreak of measles in Disneyland sickened 147 people and led to the quarantine of more than 500 others. At the time, California’s vaccination rates were below the 94 percent threshold needed to establish community immunity for measles. Oklahoma’s vaccination rates were even lower than California’s. Yen, a moderate Republican, felt like he had to do something.

But his bill never made it out of committee. The next year, he tried again, modifying the language to allow for religious objections. It failed too. So did the one Yen introduced in 2017. In 2018 he tried yet again, along with a resolution that would have placed the elimination of all non-medical vaccine exemptions on the general election ballot in November.

If you ask Yen why he lost, he’ll offer a variety of reasons in his soft, Oklahoma City twang. But he suspects the biggest factor was the influence of local anti-vaccination activists. According to campaign finance filings, Oklahomans for Vaccine and Health Choice were the second biggest donor to Howell’s campaign, after only Howell himself. “They weren’t the only reason I lost, but there’s no question the anti-vaxxers were important in my defeat,” says Yen.

In other hotbeds of anti-vaccine sentiment, centrist conservatives who’ve championed similar bills have also been conspicuously missing from this year’s midterm ballots. Replacing them are candidates backed by well-financed organizations made up of members who either entertain the fraudulent science linking vaccines to autism, who believe their kids have had adverse vaccine reactions, or think the government shouldn’t dictate what goes in their children’s bodies.

Parents who have questioned the wisdom of immunizations are not a new phenomenon. In the 1960s and 70s, Christian scientists proved effective lobbyists for exemption clauses in vaccine laws. From the 80s through the early 2000s, that mantle was taken up by a handful of short-lived grassroots groups organizing at the state level. But in the last few years, the modern anti-vaccination movement has evolved into a new chapter: the political action committee. In the 18 states that currently permit parents to send their unvaccinated children to public schools on the grounds of philosophical objections, “Vaccine Freedom” PACs are increasingly flexing political muscle to keep it that way. By making a broader appeal to parental rights, some groups are now pushing agendas that would eliminate vaccine mandates of any kind. And as they shape this year’s election ballots to be more favorable to their cause, the nation creeps ever closer to an infectious disease outbreak as inevitable as it will be tragic.

“I hold my breath every March,” says Peter Hotez, a pediatrician-scientist and Dean of the National School of Tropical Medicine at Baylor College of Medicine, who has predicted that a measles epidemic will soon explode in his home state of Texas. (In the pre-vaccine era these outbreaks usually occurred in the late winter or early spring.) He recently published an analysis of US cities with the highest rates of non-medical vaccine exemptions. Four of these urban outbreak hotspots occurred in Texas. “I’m even more worried now because the numbers keep trending the wrong way,” he says.

Earlier this summer, the Texas state health department released data showing that 57,000 kindergarten through 12th grade students during the 2017-18 school year had at least one non-medical exemption on file, up from 53,000 the year before. As the Houston Chronicle reported, it was the first time that number reached more than one percent of all Texas schoolchildren. In three counties, non-medical exemption rates reach as high as nine percent.

“We’ve got kids dying of the flu, an enormous risk of a measles outbreak, over what?” says Hotez, who has been one of the loudest voices to condemn the modern anti-vaccine movement. “Over crap. Over nothing. These phony terms that anti-vaccine groups have claimed like ‘medical freedom’ or ‘parental choice’ ignores the fact that children have a fundamental human right to be protected against deadly diseases.”

Hotez, who has an adult daughter who was diagnosed with autism at 19 months, recently wrote a book titled Vaccines Did Not Cause Rachel’s Autism, that he hopes will help reverse some of the trends he finds worrying. And he’s quick to suggest that scientists like himself for too long stood silent on the sidelines of public debate and should shoulder some of the blame for the current situation. But speaking out has come with its own price. Hotez says he now routinely gets harassing emails and messages trying to discredit him on social media, as well as demonstrators who show up at his lectures.

Yen says he endured a similar smear campaign; his church parking lot was papered with flyers comparing him to Hitler and Mussolini, and racist mailers portrayed him as a syringe-wielding authoritarian in front of the Imperial Japan rising sun flag (Yen was born in Taiwan). “They’ve been slamming me for four years with this stuff, he says.” Oklahomans for Vaccine and Health Choice did not respond to WIRED’s request for an interview.

Rep. Jason Villalba, a three-term Republican state legislator from Dallas, has also experienced some of these intimidation tactics first-hand. In 2015, Villalba filed legislation to end religious and philosophical vaccine exemptions, a loophole in state law dating back to 2007. Like Yen, he was concerned about a potential measles outbreak, especially with a two-month-old son at home.

In response, a mother named Jackie Schlegel, who says that one of her kids was injured by vaccines, formed a Facebook group of “mad moms in minivans” to kill the bill. The group quickly grew into a political action committee called Texans for Vaccine Choice determined to protect their right to medical freedom.

After the bill’s defeat, the group turned its efforts to unseating Villalba, backing primary challengers to his re-election campaign in 2016 that ran largely on the vaccine exemption issue. According to Villalba, every time he’d show up at the polls to greet people, two or three people from TFVC would be there to confront him and yell insults. “They just wanted to ridicule me and make me look foolish,” says Villalba. “I didn’t think that was an effective way to win hearts and minds.”

Schlegel denies having knowledge of any such encounters, saying only that TFVC’s tactics are to protect and advance informed medical consent. “We are the friendly face of vaccine choice and that is what we do,” she says.

Despite their efforts, Villalba won the primaries with 55 percent of the vote. But he’d been rattled. In the House’s last session he told Schlegel he wouldn’t file another vaccine bill unless there was an outbreak in Texas. “I said, ‘if you stand down, I’ll stand down,” says Villalba, recalling the encounter. “I thought we had a truce.” But when he came up for re-election again two years later, Texans for Vaccine Choice found a new candidate to run against him—a far-right challenger named Lisa Luby Ryan. And again they block-walked, poll-watched, and raised money. According to state ethics commission filings, the group has so far spent slightly more than $215,000 on campaign expenditures in 2018, more than five times what it spent in either of the previous two years. Schlegel says TFVC supported candidates friendly to the group’s mission all across the state, not just in Villalba’s district. “It wasn’t personal with him,” she says. “While he didn’t refile the vaccine mandate bill he certainly didn’t stand for informed consent and medical privacy and vaccine choice.”

At around midnight on March 6th, primary night in Dallas, Ryan sat grinning between Schlegel and Rebecca Hardy, the group’s state policy director. “We just got a call from Representative Villalba, who conceded to us and wished us well,” said Ryan in a Facebook video. “Victory!” shouted Schlegel and Hardy, arms raised high. Three weeks later, a fracking billionaire named Farris Wilks, one of the state’s biggest political donors, cut a check to Texans for Vaccine Choice for $90,000.

Although the group was swift to take credit for his loss, Villalba thinks that storyline is a bit oversold. More important to his defeat, he believes, was a different kind of outbreak in Texas: Beto Fever. In his wealthy, educated district, which Clinton won by 14 points in 2016, about a fifth of the district’s Republicans switched over to vote Democratic in this year’s primaries. “That left all the residual voters who hail from the farthest of the far right fringes,” he says.

But the two phenomena are far from unrelated. They’re both a consequence of Trump’s tumultuous, anti-establishment presidency that from its earliest days welcomed the antivax perspective into its fold. Candidates with previously untenable politics are now finding a place for themselves on major party tickets. Democratic candidates are hoping to use that to their advantage, to flip seats wherever moderate Republican voters are looking to course-correct GOP primary voters who swung too far to the right.

On Tuesday, Americans will head to the polls to cast their votes in what may be the most consequential midterm elections in modern US history. While all eyes will be on the national races that could shift power in Washington, just as crucial are the state legislative elections taking place further down the ballot. States are the battlefields where the Trump administration’s war on science, regulations, the environment, and the rights of minorities are increasingly being fought. They are where decisions about vaccines as a cornerstone of 21st-century public health policy get made.

As vaccine freedom PACs move from the margins to mainstream, more and more kids are going to school unvaccinated. Data released in October from the Centers for Disease Control and Prevention showed that while national exemption rates remain low at 2.2 percent, this is the third year that exemptions have increased. At least where vaccinations are concerned, where California goes, the nation does not seem to be following.