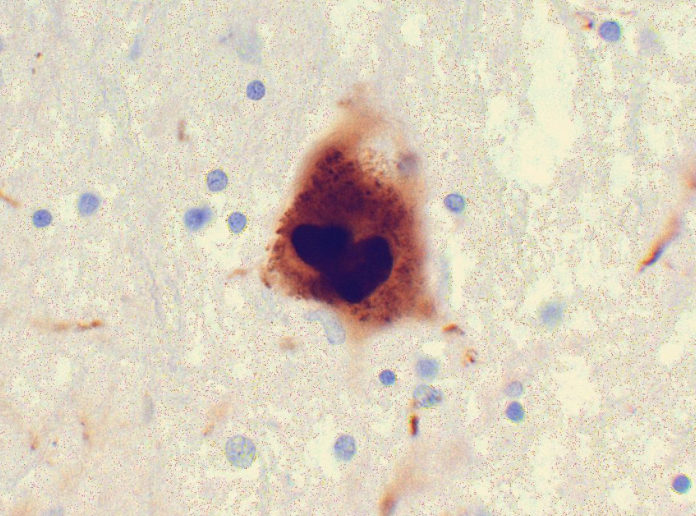 Photomicrograph of a region of the substantia nigra in a Parkinson’s patient showing Lewy bodies. (Credit: Suraj Rajan/Wkimedia Commons)

Having your appendix removed could lower the risk of getting Parkinson’s disease by 20 percent, says a team of researchers in a new study.

Using medical data from a large-scale Swedish database, a team led by scientists from the Van Andel Research Institute in Grand Rapids, Michigan, were able to tease out a connection between a condition that affects less than one percent of the population and an organ long assumed by researchers to be of little use. The find also sheds new light a complex disease that’s puzzled researchers for decades and could give doctors insights into how to help prevent the disease in people at higher risk.

The Complexity of Parkinson’s Disease

Today, we know that many symptoms of Parkinson’s disease are caused by a build-up of protein clumps in a part of the brain called the substantia nigra. These aggregations are called Lewy bodies, and they’re made up largely of a protein called alpha synuclein. The protein clogs destroy neurons, and it leads to the hallmark tremors and muscular difficulties that characterize Parkinson’s. Life expectancies for those with the disease are significantly shortened, and most patients eventually lose the ability to care for themselves.

But Parkinson’s can lurk in the body for decades before outward physical symptoms appear. That’s because, in the first stages of the disease, the problems manifest in a very different place: the gut.

“In the last 10 years it has become evident that Parkinson’s disease is not just a movement disorder but hosts a whole range of non-motor systems,” says Viviane Labrie, a researcher at Van Andel and a co-author of the study. “One of the most common non-motor symptoms in Parkinson’s patients is issues with the gastrointestinal (GI) tract.”

This often includes constipation and the need to urinate frequently, and the issues can predate a Parkinson’s diagnosis by many years.

So, to learn more about the disease, Labrie and her colleagues turned their focus from the brain to the digestive system. They focused in particular on alpha synuclein because it can travel along the nerves that links our guts to our brains; and it became clear that the appendix was a major harbor for the protein.

“We thought the appendix might be important to the GI origins of Parkinson’s disease because it plays a role in immune system regulation in the GI tract. Inflammation has been linked to Parkinson’s disease and the appendix is actually an immune tissue that is responsible for the sampling and monitoring of pathogens, and will raise immune responses,” Labrie says.

Some recent studies had hinted that the appendix, and the alpha synuclein it contains, might play a role in Parkinson’s. But, the possible causes of the disease are vague, and a diagnosis usually only comes long after the disease has taken root. The time spans involved make it very difficult to conduct studies that have enough statistical power to say anything relevant.

Luckily, Labrie and her colleagues had access to a massive database of public health records: the Swedish National Patient Registry. The list includes records from almost 1.7 million patients, some of whom have been tracked for over 50 years. All told, it comprises 92 million person-years of data. They had another thing going for them, too — appendectomies are fairly common (around 7 percent of Americans will have one), and that makes for a clearly bifurcated sample population. All they had to do was compare people who still had appendixes to those without them and see if rates of Parkinson’s changed.

And they were definitely different: Not having an appendix was correlated with a nearly 20 percent drop in a person’s likelihood to contract Parkinson’s. Not only that, but among those who did get the disease it pushed back the age of diagnosis by over three years, though there were differences in these numbers depending on where people lived.

They paired this research with a look into the appendix itself, where they found high concentrations of the alpha synuclein protein. Crucially, much of the alpha synuclein there comes in a shortened form that clumps together, like it does in Lewy bodies, more easily than the normal form will. It’s a sign that the proteins that go on to overcome brain cells in Parkinson’s might originate in the digestive system, perhaps in the appendix.

The researchers published their findings Wednesday in Science Translational Medicine.

The proteins themselves aren’t the sole culprit behind the disease, though. Everyone has alpha synuclein proteins in their bodies, and it’s not a problem for the majority of us. It’s only in the rare cases that they escape to the brain that Parkinson’s occurs.

“We think that what actually distinguishes a person that goes on to develop Parkinson’s from one that does not is not the presence of [alpha synuclein], but rather the factors that trigger departure from the appendix, its spread to the brain and its neurotoxicity,” Labrie says.

That’s made clear by an odd disparity in her data: Those who lived in rural environments saw much greater protective effects from having their appendix removed than those living in large cities.

It’s an odd contrast, but it reinforces a well-supported trend in Parkinson’s research: Those who live in the country are at greater risk. It’s another piece of evidence that an environmental trigger of some sort — perhaps pesticides — helps to kick off the disease, thought what that might be is unknown. Whatever the trigger, though, it seems to turn alpha synuclein, a ubiquitous and usually harmless protein, into a killer.

The find gives Parkinson’s researchers a new focus for their work, and it also hints at a new path for treatments. If Parkinson’s can be caught early on, it might be possible to block the alpha synuclein from ever moving from the gut to the brain, forestalling brain damage.