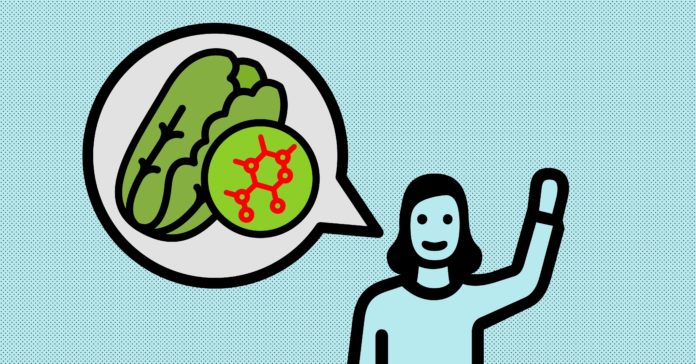 A: The Centers for Disease Control and Prevention didn’t ban lettuce or recall it—it doesn’t have the regulatory power to do either of those things—but two days before Thanksgiving, it put out an unusually strong statement telling Americans to toss any romaine lettuce in any form: whole, chopped, pre-bagged into Caesar salads, combined into spring mix, and so on. The warning covered not just homes but retailers and restaurants, and came with a recommendation to empty any fridge where romaine has been stored, and wash it out with soap and warm water.

The CDC said it was making the recommendation to not eat, serve or sell any romaine lettuce because 32 people in 11 states, plus 18 people in Ontario and Quebec, have been made ill by E. coli O157:H7, which causes very serious illness because it produces a toxin that destroys cells lining the intestines and kidneys. The patients are all infected with the same strain, based on genetic fingerprinting, and the only thing they have in common is that they all ate romaine.

But, the CDC said, “no common grower, supplier, distributor, or brand of romaine lettuce has been identified.” The agency isn’t usually so sweeping in its statements, but with a holiday coming—one that’s centered around eating and that takes people offline into the real world of airports and cars and dinner tables—it warned against all romaine until the threat can be better defined.

The Food and Drug Administration, which does have the power to compel foods to be recalled, is investigating, along with health departments in the 11 states where people have gotten sick.

A couple of them—which suggests there’s an ongoing problem, though no one has proved where the shared vulnerability is. A massive outbreak of E. coli O157 illness linked to romaine between March and June of this year sickened 210 people in 36 states, killing five of them; eight Canadians got sick as well, but survived. A separate O157 outbreak in 2017, caused by romaine in Canada and unspecified “leafy greens” in the U.S., sickened 42 Canadians and caused one death. Twenty-five Americans got sick too, one of whom died.

Going further back, wholesale salad mixes caused an O157 outbreak in 2013 (33 victims), a different brand of bagged salad caused a similar outbreak in 2012 (33 victims that time, too), and bagged spinach sickened 199 people in 26 states in 2006 and killed two elderly women and a baby.

The CDC said Tuesday that the E. coli strain in the current outbreak has the same genetic fingerprint as the 2017 outbreaks—but not the same as the giant romaine outbreak that occurred earlier this year.

Didn’t Arizona have something to do with this?

The outbreak earlier this year—the one that the CDC says was caused by a different strain—was traced back to Yuma, Arizona, which happens to be the place that grows most of the salad eaten in the U.S. between December and March. Lettuce growing in Yuma is highly hich-tech: The fields are leveled with lasers to make sure no irrigation water gets wasted and the tractors are routed by satellites. Plus, the state maintains a “Leafy Greens Marketing Agreement,” the only place other than California to have one, that audits growing practices that are supposed to protect food safety.

None of that prevented E. coli reaching the lettuce fields, which are tucked up against the California and Mexican borders and irrigated by water pumped out of the Colorado River. An FDA-CDC task force that issued a report in November said that it found the outbreak’s E. coli strain in three samples taken from an irrigation canal that brings water to the farms. The task force couldn’t explain how the pathogen got there, but food-safety advocates think they know: E. coli comes from the guts of animals, and on the other side of the canal, there’s a cattle feedlot that holds up to 100,000 cows at a time.

There’s no hard proof the E. coli came from that feedlot. Investigators were allowed to take what they called a “limited number of samples” when they visited in June, and didn’t find the outbreak strain—but there’s no guarantee that the cows present at the time were the same ones being raised there when the canal was contaminated. The local growers seemed to take the risk seriously, though. When the lettuce season started this year, they imposed wider buffer zones between farms and industrial-scale farms, increasing them from 400 feet, a little longer than a football field, to 1,200 feet. But since that still isn’t very wide—and since O157 appeared again—it’s possible that didn’t work.

So it’s the water?

Maybe. Contaminated water also caused the massive spinach outbreak in 2006, though investigators couldn’t decide whether the culprits were cattle on a nearby ranch, or wild pigs. There’s no question there’s a loophole in food safety on produce farms: They’re not required to test their water for pathogens or attempt to sanitize it. (An Obama-era program that would have required water testing was shelved by the Trump administration this year.)

But some growers have contended the problem isn’t water, it’s dirt—or, more precisely, road dust on huge pieces of cultivating equipment that are shared back and forth between Arizona and California, which could contain dried cow manure blown off fields by the wind. And the largest outbreak of toxin-producing E. coli ever recorded—almost 4,000 cases in Germany and France in 2011—shows there might be a different vehicle still. The cause in that case turned out to be seeds that were sprouted to be eaten on salads—and that had been contaminated where they were grown, in Egypt, more than two years before.

For now, all lettuce isn’t off the table; the questionnaires the CDC administered to victims don’t appear to have implicated iceberg or Boston or radicchio or kale. So have a holiday salad, if that’s your thing. But keep in mind that food safety is tricky—and that things we’re convinced are healthy can turn out sometimes to be no good for us at all.

Maryn McKenna is a fan of iceberg lettuce and writes about diseases and disasters for WIRED Ideas.

A closer look at Mirror

GizmoCrazed - October 29, 2018 0
At Disrupt SF, CEO Brynn Putnam demoed and launched Mirror, a smart gadget that sits on your wall and offers virtual fitness classes. The $1500...