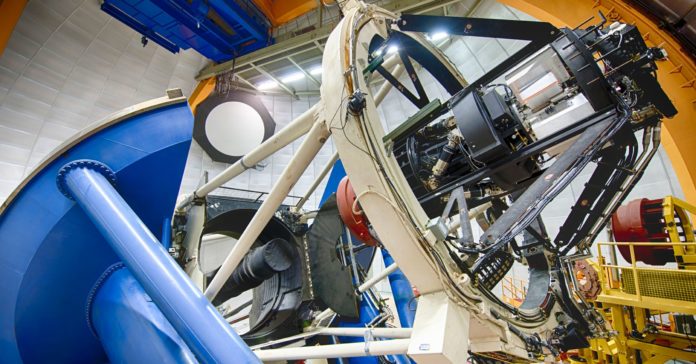 Let’s say you have a baby. Maybe you really do, maybe you don’t. But Dan Scolnic, a cosmologist at the University of Chicago, does have one, and perhaps that’s why a hypothetical baby helps him explain the universe. If you take this baby to the doctor, that doctor will weigh and measure the baby, plot those points on a growth chart, and predict how big they’ll be later.

“We kind of have this same situation now with measuring the universe,” says Scolnic, who’ll begin a professorship at Duke next month. Scientists have a great picture of what the universe was like as a baby. They also have one of what it looks like all grown up, today. And as with the doctor’s growth chart, a curve—following physics as we know it—should connect the two cleanly.

“You should be able to put in that universe’s baby picture, trace our standard cosmology, and see our universe today—if everything has gone right,” says Scolnic. But that’s not what is happening. “Something,” says Scolnic, “is not going right.”

Cosmologists aren’t sure what that something is, exactly. Maybe they’re wrong in their measurement or analysis of the baby universe. Or of its present state.

Those are the boring options, though. “The other,” says Scolnic, “is that our standard model of cosmology isn’t correct.” In other words, the way humans think about the early years, maturation, and fate of the universe might be wrong somehow.

Over the past few years, scientists like Scolnic have investigated those first two hypothetical misunderstandings. They’ve whittled down their error bars, hardened their methods, re-analyzed the results of competitors and colleagues, and gathered sharper and bigger data. Nevertheless, the discrepancy persists.

Scolnic calls this moment “the era of tension cosmology.” Others just call it a crisis.

To those who don’t study the origin and evolution of the universe, that sounds like a bad thing. To cosmologists, it’s the opposite. To be wrong is to learn that the universe is more interesting than they thought. “We’re right on the cusp of this being the coolest thing ever,” says Scolnic.

Astronomers have devised a few ways to estimate its value, and it is the conflict between their outcomes that’s causing the trouble. One method begins with the universe’s baby picture—a map of the so-called “cosmic microwave background,” or the remnant radiation from the Big Bang. From that picture, astronomers plug what they (think they) know about dark energy, dark matter, regular matter, and gravity into a model. Out pops a present state of the universe, and a prediction of the Hubble constant. Most recently, astronomers did this using cosmic microwave background data from the Planck telescope, a space-based observatory that was decommissioned in 2013.

Another method uses the “cosmic distance ladder.” Astronomers figure out how far away objects are, and how fast they’re moving even farther away, starting from here(ish) and building outward. They calculate the distances to nearby stars, and from them to more distant stars in other galaxies, and from them to supernovae in still-farther-off galaxies. They measure their movement away from us, providing another estimate of the Hubble constant.

Scolnic was part of a big team called SH0ES that used the ladder method. Its Hubble estimate disagrees with Planck’s. Behold: the crisis.

But recently Scolnic and a team tried a newer method: the inverse cosmic distance ladder. Instead of scaffolding distances from the solar system farther and farther out, this approach uses characteristics of the cosmic microwave background (the baby picture) to start to scaffold distances closer and closer to us. Moving forward in time, scientists use information about how galaxies are spread out across the universe and—as with SH0ES—supernova data. That came, this time, from the Dark Energy Survey, which aims to observe thousands of supernovae and hundreds of millions of galaxies to understand what dark energy has been like over the history of the universe. This Hubble constant estimate matched Planck’s. “It’s kind of nuts how well it agrees,” says Edward MacCauley, the lead researcher.

That agreement doesn’t make Planck and the inverse more likely to be right. “In both these methods—the forward and reverse distance ladders— supernovae are used as ‘the middleman,’” says Scolnic. “So if supernovae are happy to agree with either side, that means the problem isn’t with the middleman.” It’s something happening at one end. “If our model is wrong, it has to be something about how we understand the universe today, or how we understand the universe as a baby,” he says.

Having been on both sides, Scolnic senses this tension personally. “I feel very much in the middle,” says Scolnic, “and it has caused many sleepless nights.”

The sleeplessness—and the gravity with which cosmologists imbue this problem—has grown recently. Until a few years ago, says MacCauley, “the uncertainties were large enough that not everybody was worried about it.” The error bars on each side’s measurements essentially overlapped, meaning their calculations could theoretically have matched.

Maybe there was some systematic problem—from inside the instruments that do the measuring, or inside the analysis of either side. But rivals did independent analyses of each other’s work, supernova calculations became more precise, and Planck took the best baby picture ever. And still the two Hubble constants stood firmly apart.

Which means it’s looking more and more like the problem isn’t with the data itself, or the people digging around in it, but with our model of the universe. “The possibility that this is not due to some new physics is getting smaller,” says Silvia Galli, who helped lead the Planck analysis.

To Scolnic, that’s not surprising. “We all agree that we don’t understand around 95 percent of the universe,” he says, referring to the fact that the cosmos is almost entirely dark matter and dark energy, which have the word “dark” in front of them because we don’t know what they are. Given that we can only grasp the cosmic contents at the 5% (F-) level, it’s kind of ridiculous to think the standard model of cosmology is totally right.

But how it could be wrong remains up in the air. Every night, astronomers post new ideas to arXiv, the open access publishing site. Cosmologists, in particular, use arXiv to engage in timely back-and-forths that formal journals don’t permit. “We’re just holding on for dear life, trying to keep up with what’s coming out,” says Scolnic. And trying to figure out why the Hubble constant calculations don’t match, where they’ve gone wrong, where they go from here, and how our conception of the universe might change from that new vantage point.

Something big may be about to happen to cosmology. It’s easy to see where the cosmologists are coming from, in their glee at the possibility that they’ve been wrong about the cosmos. Which makes sense: Who wouldn’t like to live in a universe that’s more interesting than we’d thought?

Has the fight over privacy changed at all in 2019?

GizmoCrazed - January 27, 2019 0
Albert Gidari Albert Gidari is the Consulting Director of Privacy at the Stanford Center for Internet and Society. He was a partner for over 20...

Samsung gives up on Blu-ray players in the U.S.