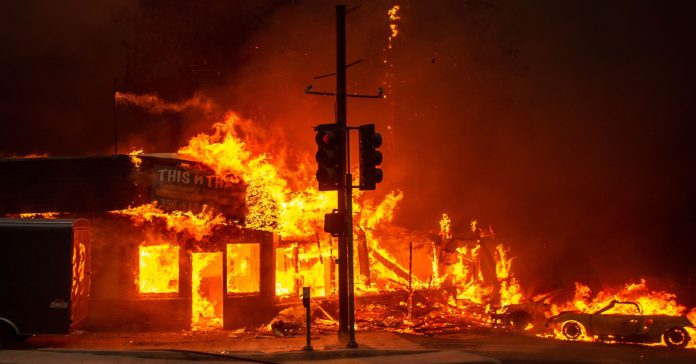 Editor’s note: This is a developing story about California’s Camp Fire, Hill Fire, and Woolsey Fire. We will update it as more information becomes available.

At 6:30 Thursday morning, a wildfire of astounding proportions and speed broke out in Northern California. Dubbed the Camp Fire, it covered 11 miles in its first 11 hours of life. A mile an hour might not seem fast in human terms, but it’s an extreme rate of speed as far as fires are concerned. At one point it was burning 80 acres a minute.

When it hit the town of Paradise, home to 27,000 people, those buildings became yet more fuel to power the blaze. The town’s mayor says that 80 to 90 percent of homes have been destroyed—nearly 6,500 structures in addition to 620 commercial buildings. For perspective, the most destructive wildfire in state history, Tubbs Fire that raged through the city of Santa Rosa last year, destroyed 5,500 total structures.

The death toll so far stands at 9. The fire is just 5 percent contained, with an estimated full containment date of Nov. 30.

“We’re seeing urban conflagrations, and that’s the real phase change in recent years,” says Stephen Pyne, a wildfire expert at Arizona State University. It used to be that fires destroyed exurbs or scattered enclaves. “But what’s remarkable is the way they’re plowing over cities, which we thought was something that had been banished a century ago.”

The Camp Fire horror show, which burned 70,000 acres in 24 hours, is a confluence of factors. The first is wind—lots of it, blasting in from the east. “We have a weather event, in this case a downslope windstorm, where, as opposed to the normal westerly winds, we get easterly winds that are cascading off the crest of the Sierra Nevada,” says Neil Lareau, an atmospheric scientist at the University of Nevada, Reno.

A windstorm barreling from the east just set the stage for this week’s burning disaster. It’s a normal phenomenon that comes from the jet stream, which this time of year grows stronger. North and south “meanders” in the jet stream, known as troughs and ridges, get amplified. These cold air masses travel through the Great Basin in Nevada and spill over the Sierra Nevada Mountains in eastern California. Big meanders set up very-high-pressure areas that accelerate winds.

“Then they get local accelerations on top of that as they flow down the mountain ranges, kind of like water over a dam,” Lareau says. Some areas in California are particularly prone to downsloping winds. “Unfortunately, right where the Camp Fire is is one of those places.”

“I always like to say nothing good comes from an east wind in California,” Lareau adds.

As the air descends at an accelerating pace, it warms up and drives the relative humidity down. Which brings us to our second factor in the horror show: fuel—lots of it. It may be November, but California is still extremely dry, which means plenty of vegetation that’s primed to go up in flames.

Very strongly, in the case of the Camp Fire and those downslope winds. So it isn’t just a matter of things being generally dry for the season in Northern California—ground and vegetation moisture fluctuates day to day, too. Scientists can calculate this in part by going out and cutting vegetation, weighing it, drying it out, and weighing it again.

“This tells us those fuels have been drying out really, really rapidly over the past few days and into this event,” Lareau says. Just take a look at the eerily prescient tweet below from meteorologist Rob Elvington the day before the Camp Fire broke out.

So you’ve got hot, dry gusts of 40 or 50 miles per hour from the northeast pushing the fire, and the fire is itself creating wind, further accelerating the conflagration. As it moves along, embers fly out of the front of the fire. “As the fuels get drier, a smaller and smaller spark can leapfrog the fire through the landscape,” Lareau says. “That’s just another way this thing comes up and bites you.”

“It’s hot, dry, and windy, are your ingredients,” he adds. “We checked off all three here.”

That’s probably why the city of Paradise appears to have suffered such astonishing losses. Urban areas aren’t supposed to burn, at least they haven’t been supposed to since San Francisco in 1906. They’ve been designed and built with better materials (read: a whole city isn’t made of wood alone anymore) and more defensible spaces. But with a conflagration like the Camp Fire, it can overwhelm an urban area by setting off hundreds or thousands of tiny fires, perhaps miles ahead of the main fire itself. There’s no single line to put up a fight, so firefighters are overwhelmed.

“It looks like it’s another case where you’ve got billions and billions of embers riding with the wind,” Pyne says. “It only takes one ember to take out a house or a hospital. If there’s any point of vulnerability, all those embers will find it.”

As the Camp Fire raged Thursday, the Hill Fire broke out in Southern California near Thousand Oaks, burning 10,000 acres so far. And yet another, the Woolsey Fire, has burned 35,000 acres and destroyed at least 150 homes.

It was no coincidence that these fires landed all at once. “Literally the same air mass is what’s causing the beginnings of a strong Santa Ana event ongoing now, as this air mass sags south through California,” Lareau says.

North or south, the state is extremely dry already. But these warm winds ripping through the Sierras are only making matters worse, siphoning what little moisture California’s vegetation has left. While the winds will likely die down a bit over the next few days, they’re due to pick back up again Sunday, which could bring still more fires.

This is what a climate change reckoning looks like. “All of it is embedded in the background trend of things getting warmer,” Lareau says. “The atmosphere as it gets warmer is thirstier.” Like a giant atmospheric mosquito, climate change is sucking California dry.

The consequence is fires of unprecedented, almost unimaginable scale. California cities are no longer safe from fire, and with climate change, things are only bound to get worse from here.

Amazon looked to the past to build the future

GizmoCrazed - February 11, 2019 0
Over the last 20 years, smart home gadgets have evolved from fantasy to commodity. Walk into Best Buy and there are dozens of products...

Apple's Heart Study Is the Biggest Ever, But With a Catch