Calling the Caravan&#039;s Migrants “Diseased” Is a Classic Xenophobic Move 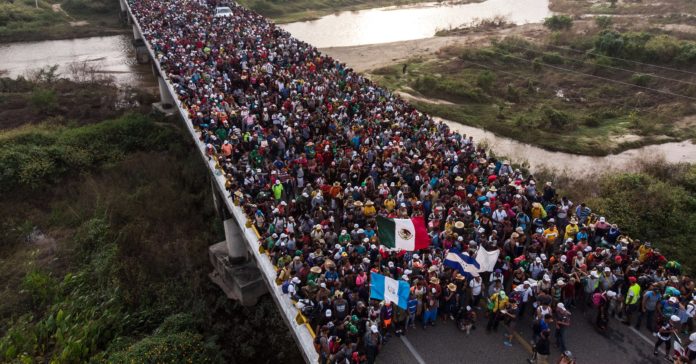 It would be extraordinarily difficult—impossibly difficult—for any one of the several thousand asylum-seeking refugees in the so-called migrant caravan now on the border between Guatemala and Mexico to have smallpox. A global vaccination campaign eliminated the disease from the world at large in 1980. Yet that’s what a guest on the Fox Business Network1said earlier this week. Leprosy, smallpox, and all kinds of horrible infectious diseases are making their way to the United States.

It’d be similarly improbable if any of those people were infected with whatever causes the disease acute flaccid myelitis—a rare but scary polio-like disorder that affects roughly one in a million people in the US. But that’s what pundit Sydney Powell said on Lou Dobbs Tonight.1 No one could plausibly pin the infection on immigrants, because nobody really knows what causes it, much less how it’s transmitted.

Sure, the people on Dobbs’ show say a lot of stuff. Earlier this week the brass at Fox disavowed and banned one guest for saying that the billionaire George Soros was funding the “caravan,” a false and anti-Semitic attack seeking to blame a global Jewish conspiracy for what people including the president have called an “invasion.” (This was the same nonsense conspiracy that allegedly inspired the mass murder in a Pittsburgh synagogue last weekend.) And disease-and-parasite metaphors are common among anti-Semites and anti-immigration activists—Louis Farrakhan called Jews termites, and the president called MS-13 gang members an “infestation.” But when Fox hosts Laura Ingraham and Brian Kilmeade talk about the “health implications” of immigration, and the two Fox guests mention specific, all but impossible diseases, they aren’t playing a metaphor game. They’re saying the would-be immigrants are literal vectors.

They didn’t invent this attack. Immigration restrictions of the early 1900s focused more on “desirability” and health status than race per se. Not entirely unfounded concerns that immigrants would bring in communicable diseases date back at least to the early days of the public health movement. Yet the actual examinations that immigrants faced were often based more on theories of scientific racism than those of germs and exposure. The exam was tougher and more subjective on the West Coast and the southern border than at Ellis Island (where Europeans entered), for example.

But no group of immigrants was (you should pardon the use of the word here) immune. People called cholera the “Irish disease” in the 1830s and tuberculosis the “Jewish disease” in the 1890s. And the 1918 flu epidemic coincided with a giant wave of immigration into the US, prompting all sorts of fears of the disease’s further spread. (It’s only fair to point out that immigrants did indeed bring smallpox to North America—white Europeans, beginning with Christopher Colombus’ crew.)

As a consequence of the very real diseases in the world, the United States has an extensive international public health system, and policies in place to screen at borders. Fortunately, child vaccination rates in places like Honduras, Guatemala, and El Salvador are pretty high. “Given that the president has already indicated they will be, in a sense, detained at the border, they’re going to be screened,” says Mike Osterholm, director of the Center for Infectious Disease Research and Policy at the University of Minnesota. “Providing these services is an important element of responding to this, and it should be clear that these people will not just be coming into our communities spreading disease. The idea they have leprosy or exotic diseases is meant to scare the hell out of people and doesn’t reflect reality.”

So for example, while it’s true that rates of tuberculosis are higher among foreign-born individuals than those born in the US, the Centers for Disease Control and Prevention screens for TB in people moving to the US. CDC screening guidelines also call out Hansen’s disease—what used to be called leprosy, which is treatable with antibiotics—and crazier stuff like hemorrhagic fevers and bubonic plague. That doesn’t mean people in the caravan have any of that. It’d be shocking if they did. (The CDC referred questions on that to the Office of Refugee Resettlement, which did not return a request for comment.)

Still, those who make it to the US southern border will be given health examinations. And all the children will get their scheduled vaccinations, which frankly is more than you can say for Texas or California’s Marin County.

Yet that probably won’t assuage the concerns of the nativists stirring up fears of a diseased migrant caravan invasion. Describing would-be immigrants, foreigners, people of other ethnicities, or the poor as “diseased” isn’t far, linguistically or philosophically, from describing them as “a disease.” “If you look at episodes of dehumanization or xenophobia, feared, hated, and despised people are seen as agents of contamination,” says David Livingstone Smith, a philosopher at the University of New England and author of Less Than Human. “So it’s common to describe these others, normally other races, as pathogens themselves.”

This history is plain, and ugly. Before and during the Holocaust, Germans compared Jews to parasites and rats. Early North Americans of European descent called Native Americans “lice.” During the Rwandan Genocide of 1994, Hutu extremists called Tutsis “cockroaches.” “It’s standard exterminationist imagery,” Smith says. “The kind of rhetoric we’ve been hearing is on the way to that sort of very sinister, dehumanizing discourse.” Once you fix in a population’s mind that some other group of people is other than human or less than human, it’s easier to imagine killing them.

So, listen, if you’re reading this because some distant relation posted it on Facebook in a passive-aggressive political link fight—if you’re hate-reading because you’re scared that someone might be trying to hurt your family and hurt America, and you know that doesn’t make you a racist … well, it doesn’t. But people are trying to trick you into becoming one. They’re trying to make a connection, in your mind, between foreigners and disease—to make them seem like a problem you eliminate instead of people you help.

It’s not a fair accusation, and there’s no evidence for it. It doesn’t make sense on its face. “Frankly, I’m much more concerned about people coming in and out of JFK or Chicago-O’Hare,” Osterholm says. “Somebody exposed to the MERS virus on the Arabian Peninsula, who’s going to check them? Nobody. If somebody picks up a drug-resistant infection while on some exotic tour, it gets to their community before they ever get screened.”

Refugees, though? “These people are going to be detained at the border and screened. They are the least risky,” he says. “I don’t know what motivates people to say things that are not true.”

Worse than not making sense, it’s straight-out dangerous. To his credit, the Fox guest host who spoke to the smallpox-and-leprosy guy addressed that assertion to the camera. “We have no way of independently confirming this,” he said. Dobbs told Powell that “you can’t very well blame that disease on illegal immigrants.” They tried to grab the idea back. But maybe you’d already heard it.

And now the president has also deployed 5,200 armed troops to the border, joining 2,000 already there, at the places where the “caravan” is likely to ask permission to enter. The really scary threat here isn’t the germs. It’s the guns.

1 UPDATE 11/1/18 10:05 AM Corrected which Fox Business Network shows these guests appeared on