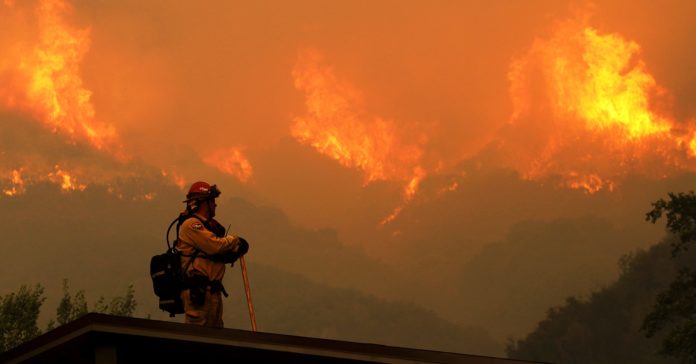 The Northern California city of Paradise is gone—the Camp Fire, by far the deadliest and most destructive wildfire in state history, has reduced home after home to ashes. It conjures images of a tsunami of flame tearing through the town, destroying everything in its path. Curiously, though, trees still stand between burned-out homes.

“If they’re still there and they didn’t burn and they’re even green, then clearly those trees didn’t contribute to the ignition of the houses,” says fire expert Jack Cohen, formerly of the US Forest Service.

At least not directly. High winds blow embers perhaps miles in advance of a blaze, firebrands that land on clusters of pine needles or leaves on roofs, quickly triggering hundreds if not thousands of house fires, as appears to have happened in Paradise.

Part of what makes the destruction of Paradise so shocking is that we tend to assume that cities just don’t burn anymore. Until around 1920, they did all the time, on account of being made largely of wood. “Cities were basically reconstituted forests,” says fire historian Stephen Pyne. “And so they were subject to the same winds and cold fronts and all the rest of it, and they burned exactly like forests.” Think Chicago in 1871, or San Francisco in 1906.

We stopped our cities from burning once. And we can do it again.

With the modernist city came fireproof materials like concrete and glass. Cities got sick of paying to rebuild, so they put fire codes in place, as well as better water infrastructure to provide firefighters with ammunition to battle the blazes.

Cities stopped burning to the ground, and the threat of fire was soon forgotten. Over the past few decades, cities in California in particular have crept closer and closer to fire-prone forests. Codes went lax, and many homes were still getting built with plain old wooden shingles.

“We quit vaccinating, in a sense,” says Pyne. “We quit doing all the things that we had learned to do to stop our cities from burning.”

The problem became abundantly clear last year, when the massive Tubbs Fire tore through Santa Rosa, not far north from San Francisco, destroying 5,500 structures and killing 22. And now the Camp Fire has eclipsed that carnage with a brutality that California is struggling to comprehend.

Part of the problem is climate change. Autumn has grown increasingly dry in California, which is poorly timed with hot, dry seasonal winds that tear in from the east, further desiccating vegetation and turbo-charging wildfires.

But regardless of climate change, we know how to keep our cities from burning—we’ve known for decades. “Let’s face the reality of this problem,” says Cohen. “There are hundreds of thousands of houses that already exist, and we don’t have to rebuild the houses to keep them from burning down during an extreme wildfire.”

A home’s vulnerability to fire largely comes down to the roof. If you live in a wildfire zone and your roof is made of wood shingles, you need a new roof made of composite shingles. End of story. With billions and billions of embers flying ahead of a wildfire, it’s almost inevitable that one will land on your roof and start a blaze.

The danger is compounded in a forested city, because trees are constantly shedding needles and leaves, which gather on roofs. “I would be willing to guess that one of the principle igniters of homes in Paradise was needle and leaf debris,” says Cohen. “Maybe years of needle and leaf debris that hadn’t been cleaned up on the roof, on the decks, next to the wood siding at the base of the walls.”

Why would Cohen venture that guess? Because plenty of trees are still standing in Paradise, unharmed amid the near total destruction of homes. The fire didn’t leap from tree to tree, taking homes along with it. Instead, the fire sent out scouts in the form of embers, which landed on clusters of debris on top of and around homes.

This shower of embers can simultaneously ignite structures all over town, overwhelming firefighters. “And then we of course have evacuation going,” says Cohen. “So these houses are not being attended to as they’re burning, which means that they just free-burn to total destruction.”

The alternative is to have every homeowner meticulously groom their homes and yards, creating a perimeter of 100 feet. You have to constantly remove pine needles and leaves from roofs and decks. You can keep flower beds near the house, so long as they aren’t loaded with mulch, which is very flammable. You don’t need to cut down trees per se, but you have to be willing to clean up after them.

These measures create a defensible space where embers may still land, but are less likely to start a conflagration. If embers do land on your manicured home, they will take far longer—perhaps hours—to start a fire sizable enough to cause significant damage. “If we have very ignition-resistant homes that won’t be involving rapidly in fire, the house is the absolute safest place to be during one of these events, as opposed to running for your life in an evacuation,” says Cohen.

That is, you stay and fight. “Now we’re talking about residents and firefighters distributed through the community picking up small ignitions,” says Cohen. “Currently we can’t do that, by and large, because we have such highly ignitable community fuel systems, houses and lots of vegetation that can spread at high intensities.”

Wildfires aren’t going anywhere. With climate change, they’re getting worse. But this is not an unsolvable problem, and protecting homes doesn’t require that much investment. But not everyone can afford it without a subsidy. Many residents of Paradise were retirees, for instance, and wouldn’t necessarily have had the income to replace their roofs. And with limited mobility, many wouldn’t have had the means to manicure their yards or have had the money to pay someone to do it for them.

So beyond attending to homes, the residents—all of them—in fire-prone communities will have to band together to bolster their cities against future flames. “Fire is in a sense a contagion phenomenon,” says Pyne, the fire historian. “Its power comes from spreading. So you’ve got to vaccinate basically everybody or it’s not going to work.” If you methodically clear your home of organic debris and your neighbor doesn’t, all your work is for naught if a fire comes to town.

“It clarifies in a sense what you have to do,” Pyne adds. “It complicates it, in where are you going to get the money and social capital and political capital to do it?”

Insurance companies may help spur along a change in attitudes. “I’ve actually talked to people who’ve said, Oh yeah, I’m buying a new house and I’m changing the roof out before I close,” says Michele Steinberg, wildfire division director at the National Fire Protection Association. “Because my insurer is looking at where I am, knows what roofs burn, and is saying, You’re going to pay more for your insurance than you are for your mortgage—a lot more.”

The question is whether the destruction of Paradise was enough to shock California into reinforcing every vulnerable city against the fiery menace.

Climate Change Is Bringing Epic Flooding to the Midwest

GizmoCrazed - June 2, 2019 0
Fierce storms lashed across the central US this week, unleashing hundreds of powerful tornadoes that carved a path of destruction through parts of Missouri...

You Can Learn Everything Online Except for the Things You Can't

KeySweeper Is A Fake USB Charger That Records Keystrokes