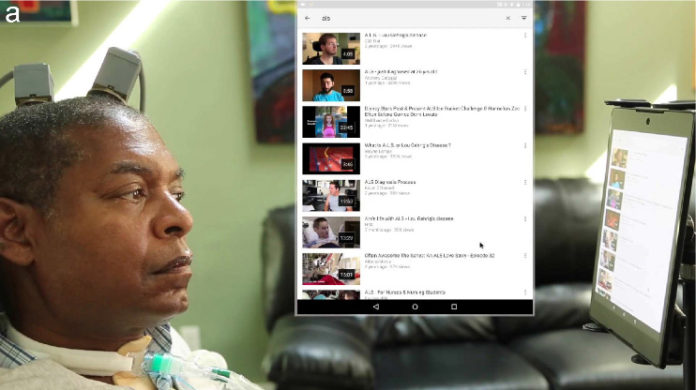 For the first time, three tetraplegic people are able to control a commercial tablet device with their thoughts thanks to a brain-computer interface. The research suggests that people who lose the capacity to speak may be able continue to communicate with the technology.

The three study participants are part of a clinical trial to test a brain-computer interface (BCI) called BrainGate. BrainGate translates participant’s brain activity into commands that a computer can understand. In the new study, researchers first implanted microelectrode arrays into the area of the brain that governs hand movement. The participants “trained” the system by thinking about moving their hands, something the BCI learned to translate into actions on the screen.

The BCI decoded brain activity associated with subjects’ intent to move their hand and passed the information to a Bluetooth interface that works like a wireless computer mouse. The virtual mouse was paired to an off-the-shelf Android tablet. The participants could then “point and click” the cursor on the tablet by attempting to squeeze their right hand, for example.

Researchers challenged the subjects to perform a series of everyday tasks on the tablets to see how well they could use the device. The participants checked and responded to email, searched the Internet, read the news and streamed music on the tablets. All together they each performed seven tasks on three different days. Subjects could complete all the tasks within 15 to 30 minutes, the team reports Wednesday in the open-access journal PLOS ONE.

The subjects report that the interface was quite intuitive. “The tablet became second nature to me,” reported one research subject in the study. “It felt more natural than the times I remember using a mouse.”

The participants also engaged in apps of their choosing. One subject shopped online and purchased groceries with the tablet. Another participant texted with friends and family and the research staff. The subjects also instant messaged each other.

The BCI also enabled subjects to engage in self-expression. One participant used a word processing app to write for example. Another of the study participants was once an avid pianist before amyotrophic lateral sclerosis, a neurodegenerative condition that leads to progressive muscle weakness and eventual paralysis, robbed her ability to play. When she enrolled in the study, she told the researchers that she really wanted to make music again. The BCI gave her the opportunity with a keyboard application.

“To see her play on a digital keyboard was fantastic,” Paul Nuyujukian, a bioengineer at Stanford University in California, who led the new research, said in a statement.

The outcome of the current study suggests brain-computer interfaces like BrainGate may enable people with ALS to maintain the ability to communicate and engage in everyday activities through the progression of the disease.

GizmoCrazed - May 26, 2016 0
Doctors have given a man his sight back, implanting a bionic eye in Texan resident John Jameson to restore some of his vision after...

Forget Growing Weed—Make Yeast Spit Out CBD and THC Instead

Why Darpa Wants Everyone to Launch Tiny Satellites