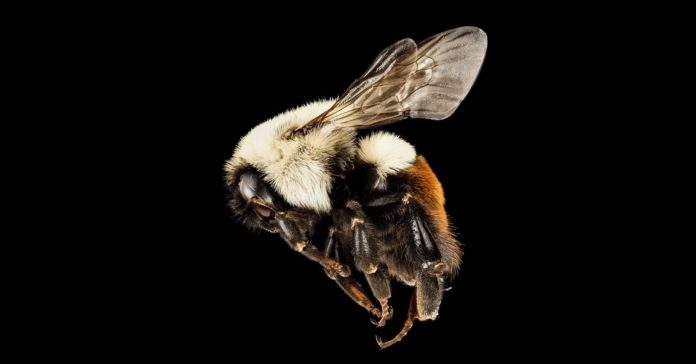 Science hasn’t been giving us a tremendous amount of good news these days. We’re speeding toward climate catastrophe, for one. We’ve screwed up the environment so badly, it’s hard to even call it an environment anymore. And that’s coming back to bite (or sting) us: Bee populations, which we rely on to pollinate our crops, are plummeting.

But science is also coming to the rescue, by gluing QR codes to bumblebees’ backs and tracking their movements with a robotic camera. Researchers have created a system that tracks individual bees as well as the dynamics of whole colonies exposed to imidacloprid, a neurotoxin that belongs to the infamous neonicotinoid group of pesticides. The findings aren’t pretty, but they may go a long way in teasing apart how neonicotinoids are ravaging bees, and how we might save these fliers.

Neonicotinoids are the most common class of insecticides globally. “When we first started using them in agriculture in particular, they passed the initial tests of, Oh are they safe for bees at the concentrations they’re likely to encounter in the field?” says Harvard biologist James Crall, lead author on a new paper in Science describing the bumblebee-tracking technique.

But those tests weren’t exactly thorough enough. “You might not see a dead bee in 24 or 48 hours, but still you’re seeing important behavioral shifts over time that lead to impaired colony function and growth in the long run,” Crall adds.

Even if a neonicotinoid like imidacloprid, a common insecticide, doesn’t outright kill a bee, it can cause other changes to it. Previous research shows, for instance, that in the field neonicotinoids can impair a bee’s ability to navigate and find flowers. That has implications for how bees forage to feed themselves and their colonies at large. What’s been going on inside a colony exposed to neonicotinoids, though, has been harder to parse.

That’s where Crall and his team’s research picks up. In the lab they set up a dozen bumblebee colonies, each housed in a clear acrylic box. The researchers fed some colonies imidacloprid at levels equal to what bees would be exposed to out in the field, while they kept other control colonies imidacloprid-free. A robotic camera system scoots around on tracks overhead, peering into each nest below. “So we monitor for about 5 minutes what’s going on in each colony 12 times a day,” Crall says. “And we can run that fully autonomously for almost two weeks.” Because every bee has a QR code on its back, a computer vision system can track their movements day and night.

The differences the researchers found between exposed and normal colonies are striking. “Bees are less active, so they spend more time resting,” says Crall. “They’re a little farther from the nest center,” where the larvae demand care, “and they also interact less with nestmates.” And the behavioral changes are more pronounced at night. “Sometimes the colony to the eye appears totally functional during the day, and then you see these strong crashes overnight.”

Lower activity levels are particularly problematic when you consider that bumbles have those larvae to coddle. Healthy bees will actively warm up the young with their bodies by vibrating their muscles. What Crall and his colleagues found is that colonies exposed to imidacloprid aren’t as good at maintaining the temperature of the larvae as normal bumbles are, which could have implications for the development of the young.

“If that’s one of the main avenues by which these compounds are affecting growth, that might be more extreme in some environments than others, or under different conditions than others,” says Crall. If the temperature outside is lovely for bumblebees, this might not be a big deal. But if you’ve got temperature swings, and imidacloprid is affecting individuals’ ability to climate-control the nest, the young might not thrive.

That wasn’t the only difference in how the bees nurture their littles. Normally bumblebees build a wax canopy that sits like a blanket on top of the developing brood, again for warmth. Almost all of the control colonies that Crall was experimenting with did this, but none of the colonies exposed to imidacloprid did. “It’s probably disrupting not just these direct short-term behaviors, but these longer-term changes in the architecture of the nest,” says Crall.

Most bee species, however, are solitary, not social. So what happens to solitary bees exposed to neonicotinoids? Females are largely on their own in these species: They’ll mate with a male, and the male will take off. “Then that female has to perform all these different activities of creating the nest, foraging, laying eggs and continuing that cycle for weeks or in some cases months until she dies,” says the University of Guelph’s Nigel Raine, who studies bees and pesticide exposure and who penned a commentary on this new study. “Therefore we could imagine that exposure to pesticides for that individual might have rather more severe consequences for their reproductive output.”

At the other end of the spectrum are honey bees, whose colonies number in the thousands. (The species that Crall studies falls in the middle: the bumblebee Bombus impatiens, with around 200 to a colony.) Neonicotinoids causes subtle behavioral changes for honey bees too, but that might not be as consequential as it would be for a small bumblebee colony or a solitary bee. “A relatively small impact on the foraging performance of an individual may be masked by more individuals going out and performing that task,” Raine says.

Good news for honey bees, but herein lies a problem. Researchers and regulators have been relying largely on honey bees as a model for studying neonicotinoid exposure—they’re easy to find, for one. But when it comes to pesticides, what goes for honey bees probably doesn’t go for bumbles or solitary bees because of the size of the societies. Raine says he’s working with colleagues and regulators to take into account these potentially more vulnerable species.

Also, we’re talking about a single stressor here: Crall and his colleagues looked at just one pesticide of seven neonicotinoids. But the idea is that researchers can use this technique to put other pesticides to the test in bee colonies.

Bees are in trouble, yes. But with novel techniques like this, scientists are getting a better grasp on what’s putting them at risk. A bit of good news, perhaps, on a planet gone mad.