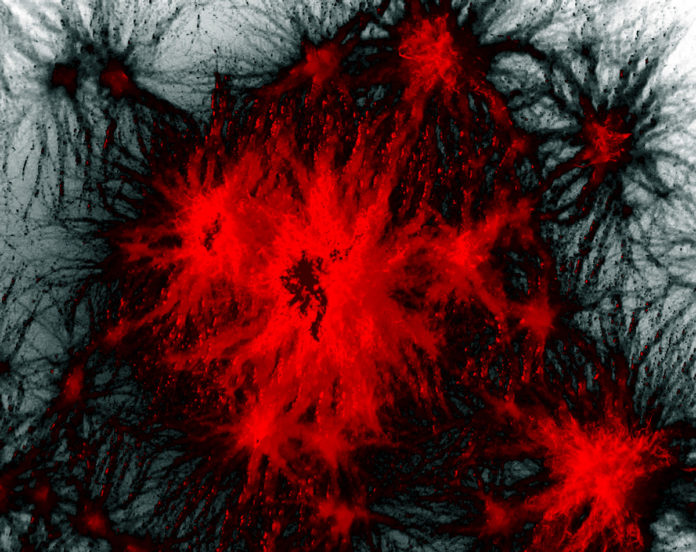 The category Dantas chose to analyze includes the granddaddy of all antibiotic drugs: penicillin. Microbiologist Alexander Fleming serendipitously discovered it in 1928, and variations on the original are so abundant that it remains the most common class of antibiotic even today.

The whole category is based on a molecule called beta-lactam, which is naturally secreted by the Penicillium chrysogenum fungus, giving the species a competitive advantage against other microorganisms in the wild. Beta-lactam works by weakening the cell wall of the creature under attack. But bacteria have evolved to resist beta-lactam by producing an enzyme that breaks the ringlike part of its molecular structure.

Dantas set out to learn how some soil microbes not only thwart the toxin, but also thrive on it. He found three distinct stages of antibiotic catabolism (as the process of breaking apart complex molecules is technically known). First, the microbe cleaves the beta-lactam ring in the same way that most any resistant bug would do it. Then it cuts off the broken ring from the remainder of the penicillin molecule, leaving behind a substance called phenylacetic acid. In the final step, the bacteria swallow up the phenylacetic acid as an energy source.

After determining which genes were likely to give bacteria these abilities, Dantas put them to the test by adding them to the DNA of an unrelated species, the bacterial workhorse E. coli.

When the E. coli was thus fortified, it ate its first penicillin buffet.

Recently, Dantas traveled to Peru to sample sewage. He wanted to learn how prevalent antibiotics were in wastewater treatment plants, where pathogens are also likely to be present, and thus could be actively evolving resistance. He found multiple top-prescribed antibiotics in the wastewater. Other studies have shown high concentrations of penicillin and other drugs in runoff from farms and near pharmaceutical plants. If these drugs could be eaten as rapidly as they’re dumped, the pathogens wouldn’t have a chance to get familiar with them. A major cause of resistance could be killed at the source.

Dantas believes that his transgenic E. coli might just do the job, though not the strain that his lab engineered, which grows on penicillin very slowly and prefers eating sugars. For this plan to work, scientists will need to engineer antibiotic gluttons.

Wright sees great potential in the idea, which could pre-treat contaminated waste products to remove antibiotics even before they get out into the open. “The concentration of antibiotics coming from effluents of manufacturing sites is stunning,” says Wright. “Pre-treatment to inactivate the compounds would be of great benefit.” Preemptive treatment could also be helpful in hospitals, eliminating antibiotics before effluent flows into the municipal sewage.

Unfortunately, the technique is not risk-free. Researchers would need different strains of these microgourmands to disarm and digest all relevant antibiotics, not just penicillin. And there’s a danger in being too successful. Bacteria are notorious for sharing useful bits of DNA. The drug-eating bacteria could seed the next crop of antibiotic-resistant bugs. “If it goes bad, we may never be able to come back,” cautions Dantas.