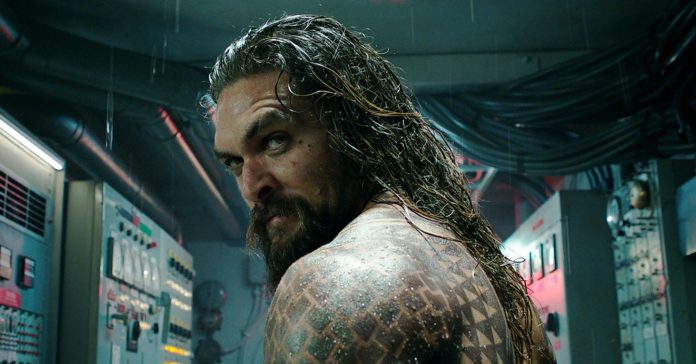 OK, I’m a little excited for the new Aquaman movie. Sure, I’ve been let down by DC movies before—but we also got Wonder Woman (which was awesome). Also, as a kid my mom made an Aquaman costume for me. She said it was the best costume for me since I had blonde hair (and so did Aquaman). But the real reason was that Aquaman didn’t wear a mask—and masks are difficult to make. It was a great costume, thanks mom.

Now for the part where I do what I do—use physics to analyze a movie trailer. Let’s get to it.

Although I don’t really know what is going on, I know there is a submarine. I also know that Aquaman shoots out of the water and lands on this submarine. It is this scene that I will analyze.

Once in the air, Aquaman has the same acceleration as a rock that is tossed up. In the air, it’s not about Aquaman, it’s just about physics. Since it’s physics, if I can look at his vertical motion I should be able to figure stuff out. In this situation, I can use video analysis to find his position in each frame of the video. This will give both position and time data so that I can plot his trajectory. Oh, but it’s not exactly straightforward. In this scene, the camera (or virtual camera) seems to move forward. This means that the ratio of pixel size in the video to actual size will change with the position of the camera. I can compensate for this changing camera, but it takes some extra steps. If you want to do something like this yourself, check out Tracker Video Analysis. Very useful.

Here’s what the motion would look like from a stationary camera.

Now for the physics. With a situation like this, there are actually three things to consider: the distance scale, the time scale (frame rate), and the vertical acceleration. In video analysis, you can pick two of these things to be known and then solve for the other one. In this case, I am going to assume the size of Aquaman and that the video plays in real time (so the frame rate is correct). Then I can plot the vertical position of Aquaman as a function of time. The plot should be a parabola. Here’s what I get.

Yup. That looks like a parabola—so that’s good. Even better, by fitting an equation to this data I can get a value for the vertical acceleration. It’s twice the coefficient for the t2 term. That puts that acceleration at 11.8 meters per second squared. On the surface of the Earth, a free falling object would have an acceleration of 9.8 m/s2. Actually, these two values are really close—especially since I guessed the size of Aquaman in order to set the distance scale.

Why is this impressive? Let me first point out that this is most certainly a CGI scene. I doubt they got a stunt man to shoot out of the water and land on a submarine (but I’ve been wrong before). This means that they didn’t just animate the motion of a digital Aquaman, they calculated his motion using physics. I think that’s awesome.

But wait! There’s more. Now that I have a trajectory for Aquaman, I can answer two questions. First, how high did he move out of the water? That’s pretty easy. I can just look at the position vs. time graph and see that his change in vertical height was about 3.6 meters (almost 12 feet for Imperials). Second, how fast was he swimming in the water before he moved into the air? This is a fairly straightforward projectile motion problem. If you know the acceleration (and I do) and you know the maximum height (and I do), you can calculate the starting velocity. I’ll leave the details as a homework assignment, but the answer is 8.4 m/s or about 19 mph (again, for Imperial unit users). That’s pretty fast, but not the fastest fish in the ocean. The sailfish can get up to speeds of 30 m/s.

Of course, Aquaman might not be going full speed here. Why would he? He’s just jumping on a submarine.

GizmoCrazed - March 6, 2015 0
It is not unusual for us to be absolutely surprised by the marvels that science can achieve. It’s these advancements in science that allowed...

Mark Zuckerberg will stop at nothing to win a game of...

Andreessen Horowitz isn’t alone in leaving behind VC as we know...