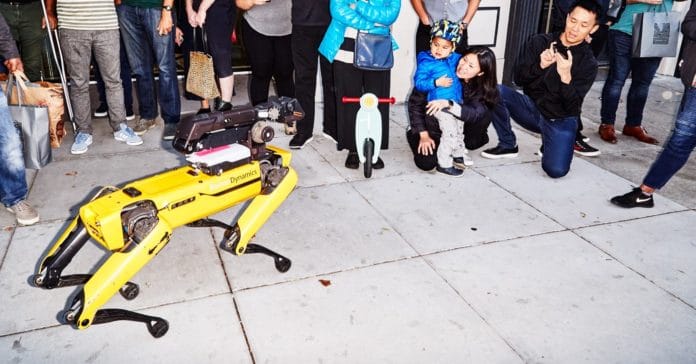 At the WIRED25 festival in San Francisco Sunday evening, Boston Dynamics’ SpotMini robot got onstage and did what no other quadruped robot has done before: It danced the running man like it was born to. It was a bit more, well, robotic than a human, but it illustrated just how far Spot has come: Twenty-five years into both WIRED’s and Boston Dynamics’ lives, robots have finally grown sophisticated enough to dance through our world. And a lot more than that, of course.

As impressive as Spot’s new moves are, they came paired with frank talk from Boston Dynamics boss Marc Raibert, who spoke with WIRED editor in chief Nicholas Thompson about the capabilities, aspirations, and futures of both Spot and the humanoid robot Atlas.

You might have seen the video a few days ago of Atlas doing parkour, bounding up a multi-leveled structure with ease. While the performance seemed effortless, it took over 20 attempts. “In our videos we typically show the very best behavior,” Raibert said. “It’s not the average behavior or the typical behavior. And we think of it as an aspirational target for what the robots do.”

This sets up an interesting tension. Whenever Boston Dynamics releases a video of its robots opening doors or doing backflips, the internet has a collective heart attack. (Raibert himself helps edit those videos, by the way.) The machines move with a stunning, perhaps haunting animality, prompting the inevitable articles about the machines taking over the world.

In reality, they’re so far away from doing so that it’s more productive to talk about how climate change will destroy the planet long before then. If it takes a robot 20 tries to get through a door and chase you down the street, it’s going to have a tough time catching up.

“Right now robot technology has advanced a lot,” Raibert said, “but it’s still not all the way where we’d like it to be. And so I think our job is to keep push the boundaries, but also find the best possible uses for the technology as we have it.”

To be clear, these machines are amazing. After Spot danced on stage this evening, it ventured out on the street and drew a mob. People love this thing, even when it’s just traipsing back and forth, picking up bags and hats with its snake-like arm.

But when Spot hits the market next year, customers should be clear that it doesn’t consistently live up to its video performances. The company will be debuting Business Spot, not Party Spot. That means allowing buyers to customize the machine with particular packages, like more cameras for surveillance, or special sensors for surveying construction sites. Spot may be able to do a mean running man, but at its core, it’s a laborer that will have to meet certain expectations of the job, not of the internet.

Boston Dynamics hopes that Spot will find employment in a wide range of industries. But much of determining what the robot is good for depends on customers, not Boston Dynamics itself. “We could try and make a special-purpose, particular solution for one area, but we don’t know which area is the right one to focus on,” Raibert said. “So we’re making a platform and we’re hoping the ecosystem will let us find the places where people can really make use of it.”

Right now, the “idea” of SpotMini you get from the internet is idealistic, though not necessarily unrealistic—the company’s humanoid robots are in fact backflipping, and its quadrupeds are in fact autonomously navigating environments. The internet may have built Boston Dynamics’ machines into god-like machines, but the market will determine their futures. So if you’ve been looking for a dance instructor that never gets tired, now’s the time to speak up.