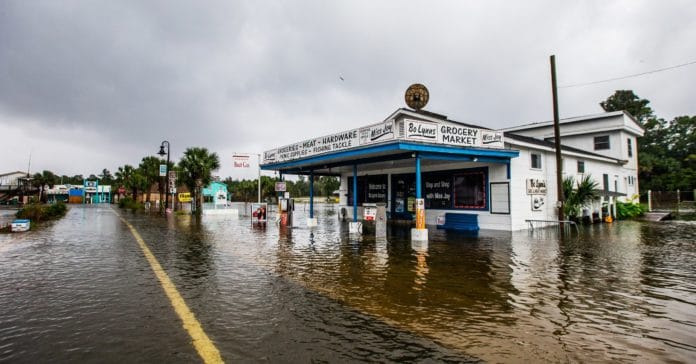 After gathering strength from the warm waters of the Gulf of Mexico overnight, Hurricane Michael blasted across the Florida Panhandle Wednesday afternoon, pummeling the area with winds up to 155 miles per hour. That makes the Category 4 hurricane one of the all-time strongest landfalls in US history.

Earlier today, NOAA’s National Hurricane Center warned that in addition to the destructive winds and heavy rains, Michael could bring a storm surge of up to 14 feet to areas in the direct path of the storm. Surge is similar in effect to a tsunami—a wall of water created when atmospheric pressure changes cause the ocean to rapidly rise and high winds push all that water onshore. It’s measured as the height of the water above the normal predicted tide, and how bad it is depends mainly on three things: wind speed, shoreline shape, and timing.

Typically, the strongest surge occurs with the eyewall of the storm. That makes sense, the strongest wind is where you see the strongest shove. Michael made landfall at Mexico Beach, just northwest of a jutting headland and the town of Apalachicola. But the topography of the area, and of the underwater terrain offshore, slowed down the water’s rise. A National Ocean Service water level station at Apalachicola recently reported about 6.5 feet of inundation.

That’s still enough to knock you off your feet or send cars and other large objects hurtling headlong into whatever is in the water’s path. And it’s why storm surge is often the deadliest aspect of hurricanes. As you can see in this Weather Channel simulation, courtesy of Climate Desk, surviving surges more than nine feet is unlikely.

To the east of Apalachicola, the winds were weaker. But the concave shape of the coastline in that part of the state threatened to push the water to dangerous heights. “It gets pinched tighter and tighter and higher and higher as the water goes over an increasingly narrow space,” says Jamie Rhone, the storm surge specialist at the National Hurricane Center in Miami, Florida, in charge of the agency’s predictions. “That’s why we saw the 9-to-14 foot forecast extend so far east of the eyewall.”

During the hurricane off-season, Rhone and other NOAA meteorologists build the models that they use to make such forecasts. That means updating them to reflect the current morphological state of the coasts—shifting sand dunes, eroding beaches, human development. All of those things impact the path water can take during a big storm. The models also need to take into account the location of the ocean itself. Since 1970, Apalachicola sea levels have risen about a third of a foot. While the NHC doesn’t produce estimates of sea level rise, its models take into account the current conditions. “Surge rides on top of the preexisting ocean, so if it’s any higher now than it was 50 years ago, the surge is going to be that much greater,” says Rhone.

The third factor is when the storm hits. The higher the tide, the more dangerous the storm surge gets. Luckily for Florida residents, Michael made landfall during low tide. It could have been much worse.

As the storm recedes from the coast and heads inland, a surge warning is still in effect for about 400 miles of coastline, from the Okaloosa/Walton County Line to the Anclote River. Rhone’s team is working on surge forecasts further north, as Michael makes its way through Georgia and the Carolinas. At the same time, they’re taking a first crack at modeling how bad the damage is in Florida, to give first responders a sense of what to expect as they head into the worst-hit areas.

GizmoCrazed - January 29, 2017 0
The world is becoming more in need of a solution to solve the problem of water pollution. As seen recently in Flint, Michigan and perhaps...

Why the Bomb Cyclone Hitting the East Coast Is So Unusual