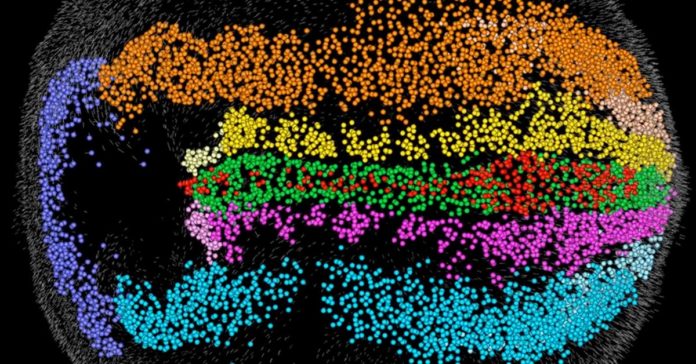 The new microscope in Philipp Keller’s laboratory looks nothing like a microscope. At least, not to the untrained eye. Tangled cords connect the components mounted to its metal base to a bank of ports on an overhead shelf. An important-looking cube built from tinted panes of acrylic sits at its center. And flexible silver ducting—the kind you might expect to find attached to a dryer vent—extends almost whimsically from its body. The result is an apparatus that looks equal parts mysterious, serious, and silly, like the kind of imaging device Doc Brown might have invented in Back to the Future, if he hadn’t been busy building a time-traveling DeLorean.

“This microscope is very, very, very unusual,” says Keller, a developmental biologist and optical physicist at the Howard Hughes Medical Institute’s Janelia research campus. That’s because it’s built to do something no other microscope can: Peer inside the embryo of a living mammal and record crisp footage of its rapid transformation from a blob of undifferentiated cells into the complex structures that give rise to the tissues and organs of a living body—from brain to gut to beating heart.

Scientists call this transformation gastrulation, and while its momentousness is widely understood (as developmental biologist Lewis Wolpert once said, “it is not birth, marriage or death, but gastrulation which is truly the most important time in your life”), its processes are not. “We wanted to create a technology that would allow us to observe those processes at the level of single cells, to see what those cells are doing, what complex behaviors they’re exhibiting, how they’re moving and dividing,” Keller says. His latest microscope, which he and his colleagues describe [in the latest issue of Cell, does exactly that.

This video reconstructs where and when the cells in a developing mouse embryo divided and differentiated into specific cell types. It shows how a small mass of cells transforms into an organized body plan of tissues and organs. The visualization relies on software, also developed by Keller and his team, that allows them to track and reconstruct the developmental history of these different cell types.
K. McDole et al./Janelia Research Campus/Cell

Keller has developed embryonic imaging technologies before. A decade ago his lab produced the first “digital embryo” of a zebrafish. In 2014, he did the same for flies. But both of those animals, which are not only small but see-through, are relatively simple to image.

Mammals are a different story. Take mouse embryos, for instance. They’re difficult to keep alive under lab conditions and their developing tissues are opaque. Plus, they grow more quickly than flies and fish. In mice, gastrulation and organ development begin in a 48-hour window between 6.5 and 8.5 days post-fertilization. During this period, the embryo grows in volume by a factor of 200 and undergoes dramatic changes in shape.

Keeping the embryo in focus throughout its metamorphosis poses an insurmountable challenge, not just to existing imaging equipment but anyone tasked with operating it. It’s too fast. Too dynamic. Collecting enough high-resolution imagery to produce a moving image would require a human operator to make thousands of precise decisions and adjustments every minute. “And no human mind can work that quickly,” Keller says.

The researchers also developed a computational method that they call TARDIS. The technique combines developmental data from multiple embryos into one “average” embryo that allows them to quantify differences in the development of individual embryos and examine how the development of mutant or otherwise abnormal embryos differs from those developing normally.
K. McDole et al./Janelia Research Campus/Cell

So he and his team designed a microscope to do it for them. Algorithms programmed to track the embryo’s size and position control a pair of cameras and two light sheets, which shine thin bands of laser light to illuminate sections of the sample. (The embryo itself is housed inside the important-looking acrylic cube at the center of the apparatus.) The algorithms keep track of how the light sheets move, determine how the sample itself shifts and grows, and direct precise motors to adjust the embryo’s position in space—all on a millisecond-by-millisecond basis. The result is two new images of the embryo every 20 milliseconds.

Videos like the ones you see here depict everything from the first beats of a newly formed heart to the development of a neural tube, the structure that gives rise to the brain and spinal cord. The researchers produced footage of 100 embryos to demonstrate the power of their new scope, collecting close to a million images of each.

To make sense of the footage, they also developed new software tools. One, called statistical vector flow, retraces the development of each cell in an eight-and-a-half day-old embryo to determine where it originated. (By hand, Keller says, this process would take two to three years to complete—but a supercomputer can manage it in a few hours.) A cell division detector automatically records where and when cells divide. A third program—called TARDIS, after the time-traveling spacecraft from Doctor Who—aligns four embryos across space and time to create a virtual, “average” mouse embryo, which the researchers say will be useful for comparing against the development of mutant or otherwise abnormal embryos.

“Until now we’ve been stuck taking snapshots, but this approach allows you to watch how cells behave and develop in the living embryo and to observe the dynamics of the process,” says Janet Rossant, a developmental biologist at The Hospital for Sick Children whose research on early embryos hinges on advanced imaging techniques, and who was unaffiliated with the study.

Rossant is one of several scientists already scheduled to use the microscope, which Keller and his team have made freely available through the Advanced Imaging Center at HHMI’s Janelia research campus. Its function-over-form construction notwithstanding, the microscope cost roughly half a million dollars and some serious optical know-how to create. Allowing other researchers to reserve time on the device will enable them to perform more science more quickly than if they were forced to build or buy one on their own—though Keller and his team have made the blueprints publicly available, as well, for anyone so inclined.