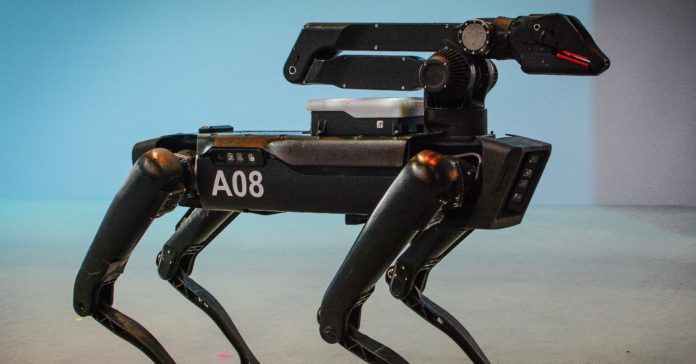 Late last night Boston Dynamics dropped a new video of its robot dog, SpotMini, in action. It walks up some stairs (no big deal—it’s done that before) and then through some corridors, periodically extending its camera-equipped arm to survey bits of a construction site. Then it walks backwards down some stairs and through a doorway and then …

This is where—given the theatrics of pretty much every other Boston Dynamics video that’s come before it—Spot should have done something righteous. Perhaps fighting a human to open a door. But no, just a nice fade to black. You see, all this time, we’ve been watching Party Spot have fun on the internet. But this new Spot is Business Spot. Because Boston Dynamics is a business, and Business Spot is its star product.

In May, the company announced that after all those teaser videos, it’s finally bringing SpotMini to market (not yet Atlas, its famous humanoid robot). It’s one hell of an impressive quadruped, but the question is: What is SpotMini good for?

When Boston Dynamics boss Marc Raibert announced SpotMini’s commercial debut, he said it’d come with packages. If you want Spot to work as a security guard, for instance, you’d outfit it with more cameras. Think of it like a car with options, only instead of adding rims, you add a snake-like arm that lets the robot open those aforementioned doors. So given this new video, you might use Spot to survey progress at a construction site. All well and good, but other specialized robotics companies, like Doxel, are already doing the same.

What sets SpotMini apart from other robots is its astonishing mobility. That comes from over two decades of Boston Dynamics’ research into both quadrupeds like Spot and bipeds like Atlas. But on something like a construction site, is that something you’d really need, when a tracked robot can also tackle stairs? Yes, maybe, given how hard it is to knock Spot off its feet—safety first on a construction site, after all. And if you were to outfit Spot to work as a security guard, doing the rounds day and night, could it beat out a robot like Knightscope’s rolling K5 machine, which is already working that beat?

We’ve grown to love Party Spot. But in this new era of Business Spot, someone has to go to work and make Boston Dynamics some money. Luckily, we’ve still got the antics of Atlas the parkour-loving humanoid, our favorite super senior. Who knows, maybe Spot will have a few too many and let it all loose in a raucous video now and then.

Happy graduation, Party Spot. Do mind the foreman, though.

Toyota sees traditional gas engines phased out of its line by...

2/3 Of Deaths Are Caused By Diabetes, Cancer, Heart And Lung...