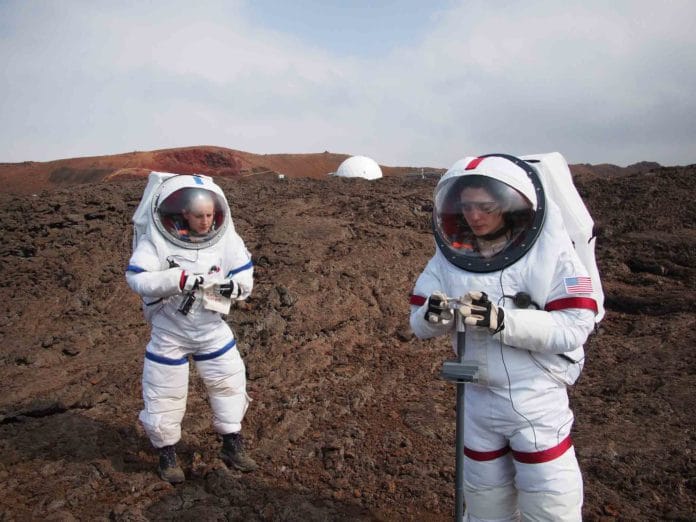 Can we go to Mars without going crazy? In May 2001, Discover’s cover story asked exactly that, exploring unanswered questions about the psychological perils of humans crammed together and flung through space.

At the time, scientists didn’t have much data to predict how people would handle the six-month journey. Researchers realized interpersonal skills and camaraderie would be critical to success.

We’re still not sure how things would go. But growing interest in the mental risks of space travel — which NASA lists as one of the biggest threats to astronauts — has spawned a wave of new research and technology.

Experts are developing stress-management systems, including virtual reality programs and robotic companions, to help interplanetary travelers cope on their trip. And projects that simulate long-term space travel are giving researchers insights into how we’ll deal. Participants endure months in cramped confines in analog missions at NASA’s facilities in Houston, as well as remote places like Antarctica, the floor of the Atlantic Ocean and atop a Hawaiian volcano. The European Space Agency’s CAVES program, started in 2011, sends participants into unmapped Italian caverns to test and train their cooperative exploration skills. Then there’s the final run of Mars-500, another international Martian analog, where six men from four countries simulated an entire mission to the Red Planet over 17 months, from 2010 to 2011, in a tiny Moscow facility — the closest we’ve gotten to the real thing.

Those projects suggest space agencies are taking the psychology of astronauts more seriously than it did in 2001, says David Dinges, a professor of psychiatry at the University of Pennsylvania Perelman School of Medicine. Good thing, too, since Dinges — who was featured in our 2001 article — and colleagues published a study in 2014 reporting two Mars-500 crew members accounted for 85 percent of the mission’s reported conflicts.

Clearly, selecting voyagers with the right psychological profile is critical to mission success. Though we still don’t know what that profile looks like, it’s becoming easier to see what won’t work. “Having six Type A personalities on a long, boring voyage may not be the best combination,” says psychologist Gary Strangman, who works with the Translational Research Institute for Space Health, a collaboration between NASA and a consortium led by the Baylor College of Medicine in Houston.

Jack Stuster, a cultural anthropologist who has studied journals kept by both astronauts and earthbound explorers, says behavioral issues are a surmountable challenge. Enthusiasm for putting the first footprints on Mars, he thinks, will inspire resilience: “Humans will endure almost anything to be among the first.”