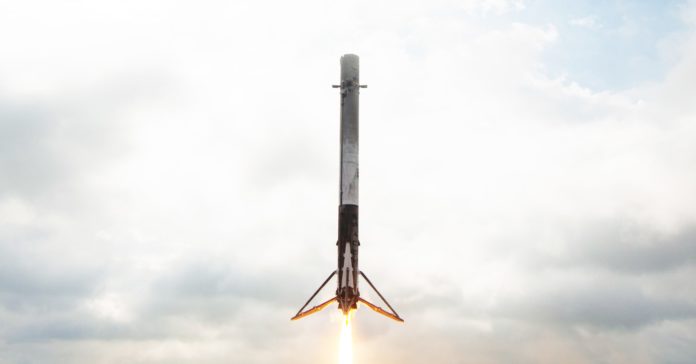 For the first time since July 25, a Falcon 9 sits perched atop SpaceX’s California launch pad, ready to fly. Its mission: to deposit an Argentinean Earth-observing satellite, dubbed SAOCOMM-1A, into orbit. What’s new with this flight is that SpaceX will attempt to have the rocket touch down in the middle of a new landing zone, a mere quarter mile from where it launched.

So far, the company’s west coast landings have all taken place on the company’s drone ship, Just Read the Instructions. The Federal Aviation Administration recently granted SpaceX permission to make its first so-called return to launching site landing, or RTLS, at Vandenberg Air Force Base, in California. (SpaceX’s previous RTLS landings occurred in Cape Canaveral, Florida). SpaceX leased the would-be California landing zone from the Air Force in 2015, but only recently obtained clearance to activate it.

The launch is scheduled for 7:21 pm PT on Sunday, October 7.

Real estate is tight at Vandenberg, and the Falcon is expected to land approximately 1400 feet from where it lifts off, which raises the stakes for SpaceX. If anything goes awry, an explosion could potentially knock out the launch pad and other nearby facilities. At Cape Canaveral, by contrast, the launch and landing zones are several miles apart. So far, SpaceX has completed 11 land landings. (The last RTLS was in February, when the Falcon Heavy’s two side boosters touched down in sync).

A successful landing will be a huge win for SpaceX, as the company won’t have to rely solely on its drone ship when recovering boosters shot from its West Coast facilities. Without having to dispatch recovery vessels to retrieve them, the boosters can be pressed back into service more quickly. Further, salt water can be corrosive, requiring more time for inspections and possible refurbishments. The flip side is that returning to land demands more fuel than touching down on the drone ship. The type of landing SpaceX pursues is largely dependent on the payload and how much fuel is left after launch.

The rocket that will launch this weekend will be one of SpaceX’s block 5 boosters. In May, SpaceX launched the first of these souped-up versions of its flagship rocket, the Falcon 9. The block 5’s durability comes from a set of upgrades featuring improved engines, a more sturdy interstage (which connects the first and second stages of the rocket), titanium grid fins, and a more robust thermal protection system, all of which allow it to better withstand the rigors of launch. Musk says that this turbocharged version of the Falcon 9 is engineered to re-fly 10 times or more, with only light refurbishments in between, and up to 100 times before retirement.

SpaceX has produced four of these beefed-up Falcons; three have flown once, while one has two launches under its belt. The one that flew in May launched again 12 weeks later, and is expected to fly again this year. The launch this weekend will refly a different block 5 booster. Designated B1048 by SpaceX, this booster first took to the skies in July, delivering 10 Iridium NEXT communications satellites into orbit.

On Tuesday, B1048 briefly fired its engines as part of a routine static fire test that all rockets must take part in before launch. Smoke and fire surrounded the Falcon as it roared to life. Its normally pristine paint scheme was scorched from its earlier sorties. Afterwards, SpaceX confirmed on Twitter that the test went well and the launch would proceed as planned on Oct. 6.

The company then bumped the launch date out to Sunday Oct. 7th at 7:21 pm PT, offering no explanation for the delay. The reason might have something to do with a member of SpaceX’s recovery fleet: Mr. Steven. Acting as a mobile catcher’s mitt, the former offshore cargo vessel is outfitted with four large arms extending from its deck with a bright yellow net—spanning nearly 40,000 square feet—stretched in between.

SpaceX equipped Mr. Steven with the tools it would need catch payload fairings (the two halves of the rocket’s nose cone). According to SpaceX CEO Elon Musk, each fairing—typically a one-time use component—carries a $6 million price tag, accounting for one tenth of the Falcon 9’s overall price. The fairing’s job is simple: protect the payload as it travels through the atmosphere. Once that task is complete, the pieces separate from the rocket and fall back to Earth, where they sink in the ocean. But in an effort to reduce launch costs and reuse more of the rocket, SpaceX has outfitted each of the fairing halves with its own parachute and programmed them to navigate themselves back to Earth, where Mr. Steven will be waiting with an outstretched net.

The would-be fairing catcher has spent the last 45 days sitting armless in the Port of Los Angeles. This week, SpaceX engineers were busy reattaching Mr. Steven’s four arms and its giant net. It’s unclear what sort of upgrades Mr. Steven received (if any) during the downtime, but if Mr. Steven’s fifth attempt at a catch is successful, SpaceX will have made another leap forward in its quest to achieve total reusability.

GizmoCrazed - November 22, 2018 0
Few things herald Thanksgiving as loudly as turkeys, flight delays, and long hours in front of the TV watching football. It's an important time...