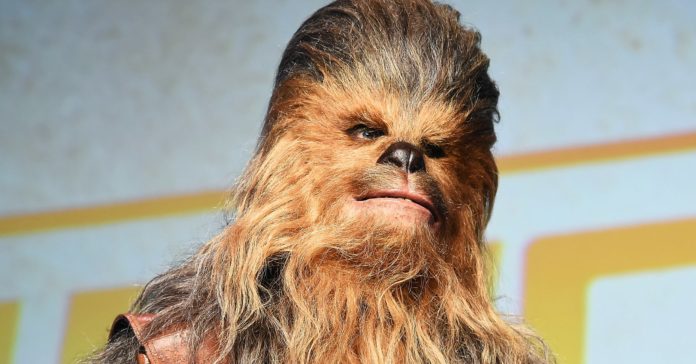 Everyone knows I love both Star Wars and physics. I’ve been wanting to do a physics post for Solo: A Star Star Wars Story—but I’ve waiting. I like to wait until the movie is available for home viewing (online or Blu Ray) so that people have a chance to watch it. If you haven’t seen it yet, your time is up. You can consider this your SPOILER ALERT.

Actually, the stuff I’m going to look at in this post doesn’t really involve any major plot points. It’s not like I’m going to reveal that Darth Vader is Luke’s father (oops—slight spoiler alert if you haven’t seen The Empire Strikes Back). OK, here is your last chance to bail on this physics post. You have been warned.

Have you ever noticed how some roads (particularly those tight curves on the exit ramps) have roads that aren’t level? There’s a reason to add a bank to these turns—they make it easier for cars to turn without crashing. Why?

But what the heck are those arrows above the “a” and “v”? Those arrows are there to indicate that the acceleration and the velocity are vector quantities. A vector is a type of variable that has more than just one “piece” of information. A velocity vector could have three “parts”—a component for each dimension (since we live in 3 dimensions). The same is true for acceleration—it has three components. So, it doesn’t just matter about the total speed but also the direction of that speed (which we call velocity).

Just to make sure everything is clear, here is a diagram showing the top view of a car driving in a circle at a constant speed. You can see the car at two different times with velocities in different directions. I also put an arrow showing the direction of the acceleration vector.

Here are two different forces that could cause a car to move in a circle. In both of these diagrams, the car is driving towards the viewer and turning to the left of the screen.

For the car on the flat curve (the one on the left), there is one force pushing towards the center of the circular path—that is the frictional force. You need friction between the tires and the road to get the car to turn. That’s why some people crash on icy roads—there’s not enough friction to turn.

For the car on the banked turn, there is one big difference—it’s that force labeled FN. This is the force that the ground pushes up on the car and it’s perpendicular to the ground (that’s why there is an “N” for normal). In this banked turn, the ground force does two things. First, it pushes up to counteract the downward gravitational force. Second, it has a component that pushes in the direction of the center of the circle. So this ground force is what causes the car to have an acceleration. If you get the angle and the speed of the car just right, you don’t even need a frictional force to turn the car. It doesn’t matter if the road is wet, icy, or dry—it can still turn with a banked road.

We have this force-motion model in physics. It says that the net force on an object is equal to the product of mass and acceleration. But what is a force? A force is an interaction between two objects—like when you push on the wall, or when the Earth’s has a gravitational interaction with the moon. However, there is one thing about this idea—it only works if you view things from a non-accelerating reference frame (an inertial reference frame).

What does this have to do with Star Wars or turning cars? Well, suppose you are in a car and that car makes a turn. Let’s say the car turns to the left and you are sitting in the passenger seat. How does it make you feel? It feels like you are getting pushed into the door, doesn’t it? It’s some invisible force from this turn—except it’s not. There is no force pushing you away from the turn. Instead, this is the side of the car pushing you IN to the turn. But since you are in the car and the car is accelerating, you have put yourself in an accelerating reference frame and the force-motion model doesn’t work.

Back to the cars on the flat and banked curve. Let’s add something in the car—some fuzzy dice hanging from the mirror. When the car turns, there will be three forces on this fuzzy dice (in the reference frame of the accelerating car). In the car on the flat turn there will be the downward force from gravity, and the horizontal force from the fake force pushing away from the center of the circle. In order to make all the forces add up to zero, the string holding the dice must pull at an angle.

What about the dice in the car on a banked curve? There is still a fake force pushing away from the center of the circle. However, since the car is tilted the gravitational force is not “straight down” (with respect to the car). This means the fake force can cancel the sideways part of gravity and the dice hangs “straight down.” Here, maybe this diagram will help.

Notice that really the hanging dice are the same in both cars—it’s just the car orientation that’s different. From the perspective of the banked turning car, it feels the same as though gravity was pulling “down” but just a little bit harder. There is no “sideways” force.

There is another way to think about the inside of a turning car using the Equivalence Principle. Albert Einstien said that an accelerating reference frame is indistinguishable from a gravitational field. This means that if you are in a box with no windows and you feel your weight, this could be due to a gravitatational force OR because the box is accelerating.

We finally get to the scene in Solo: A Star Wars Story. In this part of the movie, it’s essentially a train robbery. But wait! This train is on an elevated rail and even better, it leans on the tracks when taking a turn. Han and Chewie are on the train during the turn but it’s too late. The storm troopers arrive. The storm troopers are prepared. They have magnetic boots so they won’t fall off the turning train. Chewbacca is not prepared. He almost falls off—but his BFF is there to save him (BFF means best friend forever).

Here is my artist rendition of this scene.

Now you see the problem, right? If they are on a turning train that is on a banked turn, “down” would be towards the floor of the train, not the real down. Han doesn’t even need to save Chewie—physics can save him. Oh, and the storm troopers don’t even need magnetic boots.

If the train was on a level and turning track, THEN Chewbacca could be falling out and the storm troopers would need magnetic boots. But not for a turn. OK, I know what you are saying. Yes, it is indeed possible that the train is on a banked track that is not designed for that speed. If the train was going too slow, then yes—the scene is exactly correct.