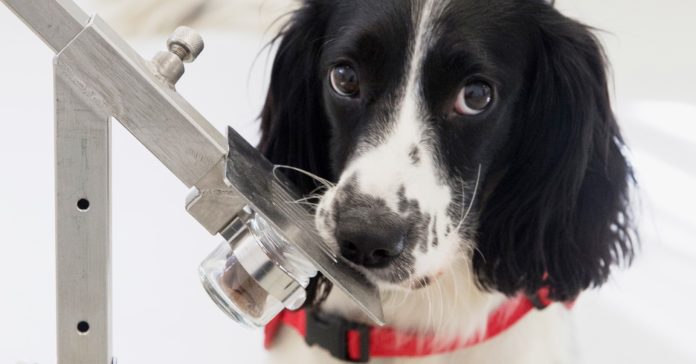 In November 2016, a team of scientists from the Medical Research Council in Gambia visited primary schools armed with hundreds of beige-colored nylon socks. Handing them out to children there aged five to 14, the researchers instructed them to wear the socks overnight, only taking them off if they were washing their feet for prayer. The next day they returned to collect the dirty laundry, sort it, and put it in the mail to a British charity that would spend the next four months using the material to train dogs to recognize an odor imperceptible to the human nose: the molecular signature of malaria.

Dogs possess a sense of smell many times more sensitive than even the most advanced man-made instrument. Just how powerful is a pupper schnoz? Powerful enough to detect substances at concentrations of one part per trillion—a single drop of liquid in 20 Olympic-size swimming pools. With training, dogs can sniff out bombs and drugs, pursue suspects, and find dead bodies. And more and more, they’re being used experimentally to detect human disease—cancer, diabetes, tuberculosis, and now, malaria—from smell alone.

On Monday, researchers presented these latest results at the American Society of Tropical Medicine and Hygiene annual meeting in New Orleans. In double-blind lab tests, two canines proved able to correctly pick out the scent of children infected with malaria parasites 70 percent of the time. While all the schoolchildren appeared healthy, blood tests administered on-site discovered that 30 children were actually carrying the disease. This work is just a proof of concept, but the hope is that one day biodetection dogs could be deployed at airports, ports of entry, or other border crossings, to prevent asymptomatic carriers of the parasite that causes malaria from bringing it back into areas where the disease has been eradicated.

The work was funded by a $100,000 grant from the Bill & Melinda Gates Foundation, which has made malaria a priority in recent years, even spearheading an ambitious effort to eradicate the disease with Crispr-edited mosquitoes. The World Health Organization warned in its latest malaria report that decades-long progress in fighting the disease has stalled and is in danger of reversing. Each year, it kills half a million people, mostly children.

“The next stage is to figure out how well the dogs can do under natural circumstances with real people,” said James Logan, Head of the department of disease control at the London School of Hygiene & Tropical Medicine, which collaborated on the research. If they prove adept enough, the dogs could become a routine, noninvasive screening tool. They could be especially useful during the dry months, when there are few mosquitoes and very little transmission of the disease, but the parasite is holed up in human hosts who don’t show any symptoms. “Finding those individuals is currently very difficult,” says Logan.

In this study, dogs were trained to sniff out malaria through the scent of the disease in samples of socks worn by infected children.
Medical Detection Dogs

An entomologist by training, Logan spent the early years of his career trying to understand why some people are more attractive to mosquitoes than others. A few years ago, he began to wonder if, like other parasites that rely on multiple hosts to complete their life-cycle, malaria-causing Plasmodium had a way to make infected humans smell tastier to the winged blood-suckers. Through a series of experiments, his research group showed that indeed, people infected with the parasite put out a unique aroma that sent skeeters a’swarming. They identified a cocktail of volatile compounds that proved a potent potion for attracting mosquitoes.

Where this molecular homing beacon comes from is still a mystery. Logan posits three possibilities: the parasite could be producing it, the stress from having a parasite in the body could be inducing human cells to secrete it, or the infection changes the bacterial communities living on people’s skin, resulting in the signature scent. The next phase of their research involves trying to further understand the specifics, so they could one day develop a device that does the work of a dog’s nose, without the need for a pooper-scooper. And in the meantime, they plan to begin trials in the real world to see how the dogs do with people, not just socks.

So how do you train a dog to detect disease? Much the same way you’d train one to pick out a whiff of gunpowder or heroin. You start by teaching them a game of sniff-and-seek.

“Dogs have something called neophilia, which means they are attracted to new and interesting odors,” says Claire Guest, who runs Medical Detection Dogs, a ten-year-old charitable organization devoted to supporting research into canine biodetection work. In their facilities an hour outside of London, human trainers place a few drops of a standard training liquid into small glass jars. Those get clipped behind a metal grate attached to a standing arm, which are lined up one next to the other. The dogs are instructed to walk down the line, pausing to sniff each one. If they stop at the new smell a trainer croons, “That’s it, good dog.” Soon they learn that if they stop and sit pointing at the right jar, they’ll get a treat.

The dogs don’t live at the facilities—they reside with families in the area and come in each day for a few hours of work. So it can take a few weeks to learn the basic rules of the game. But once that’s done, you can transition them to other smells, like schoolkids’ socks. MDD trained three dogs to detect malaria; a spaniel named Freya, Sally, a Labrador, and Lexi, a Lab-Golden Retriever mix. They’re 3 of 38 dogs currently working at the organization. Others are learning how to sniff prostate cancer, colorectal cancer, diabetes, Parkinson’s, and in the newest trials, the bacteria that causes urinary tract infections. Each dog is only trained in one disease indication, but not because they couldn’t learn more than one. Their human handlers just wouldn’t know which was which. In theory you teach them to raise a right paw for malaria and left paw for diabetes, but that would likely introduce more error into the equation.

All of this work is deeply personal for Guest, whose father passed away from Parkinson’s a few years ago. In 2009, her own dog, Daisy, nudged her repeatedly in the chest, nosing out a lump that turned out to be breast cancer. But she’s most excited by some of the organization’s more out-there research. MDD is collaborating with a scientist in Mexico City who’s built a bioelectronic nose for the purposes of detecting cancer via odor. But its algorithms need to be taught how malignant tissues smell. That’s where the dogs come in. “We can say to the dog, ‘here’s 10 cancers, which smells the strongest,’ and then we feed that data to the AI,” says Guest. “If machines can understand what odor is, that will be a much more powerful tool for us in the future.”

ABOUT US
Your future tech news site covering medical breakthroughs, virtual reality, robotics, space travel and green technology. Gizmocrazed works with many affiliates and therefore please consider all links to be affiliate related.
Contact us: [email protected]zmocrazed.com
FOLLOW US
© Gizmocrazed - Your Future Tech News Source Privacy Policy We are a participant in the Amazon Services LLC Associates Program, an affiliate advertising program designed to provide a means for us to earn fees by linking to Amazon.com and affiliated sites.
We use cookies on our website to give you the most relevant experience by remembering your preferences and repeat visits. By clicking “Accept”, you consent to the use of ALL the cookies.
Cookie settingsACCEPT
Privacy & Cookies Policy