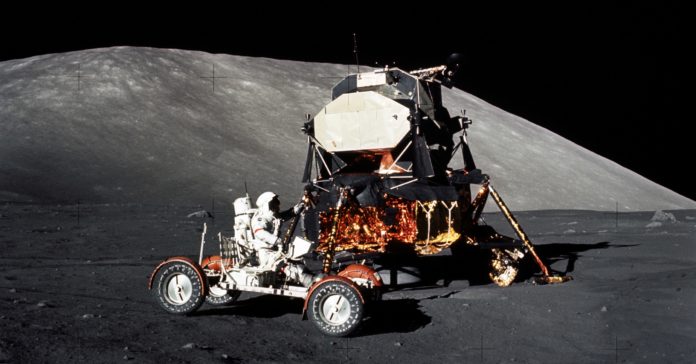 It’s the 60th anniversary of NASA. So what gift do you get for an organization that already landed on the moon? Landing on the moon again would be nice—but in the absence of that, I suggest a video analysis from the Apollo 17 mission, the last time humans were on the moon. We’ll look at footage of the lunar module taking off from the surface of the moon.

But wait! If the humans are leaving the moon, then who is operating the camera? Great question. In this case, it was a remotely operated camera on the lunar rover placed about 150 meters away from the launch (read all the details here.

What the heck is video analysis? Basically, it’s the process of getting position-time data from a video. If I know the size of some object in the video (like the width of the lunar lander) then I can get a pixel-to-distance ratio. Next, by knowing the frame rate, I can find the time for each frame (by essentially counting frames). That’s about it—you then get position time data. Oh, you might have to take into account the panning and zooming of the camera, but that’s why it’s nice to use a program like Tracker Video Analysis.

Let’s get to the data. I can scale the video assuming a base width of 30 feet. After that, I can plot the vertical position of the ascent stage. Here’s what I get.

If the lunar module has a constant acceleration, the position vs. time graph should be a parabolic function. By fitting a parabola to this data, I can get the acceleration—it will be twice the coefficient in front of the t-squared term. That gives the spacecraft a vertical acceleration of 2.04 m/s2. That’s not too crazy.

Notice that I only fit a parabola to the first part of the data and not the whole motion. There is a reason for that. As the lunar lander moves up, it gets farther away from the camera. This means that the apparent size and the scale of motion should change. In the graph above, there is an assumed constant scale.

Also, I should point out that once the spacecraft moves past the hills in the background the motion can no longer be tracked. It becomes impossible to compensate for the motion and zooming of the camera without a comparison of the background. But maybe there is something you can do about that (in the homework).

Finally, I am going to leave you with a gif (not a gift). This is the camera-corrected view of the lunar module ascent. This is created by adjusting the size and position of each frame so that the “world-view” is constant. It’s not needed, but I think it looks cool.