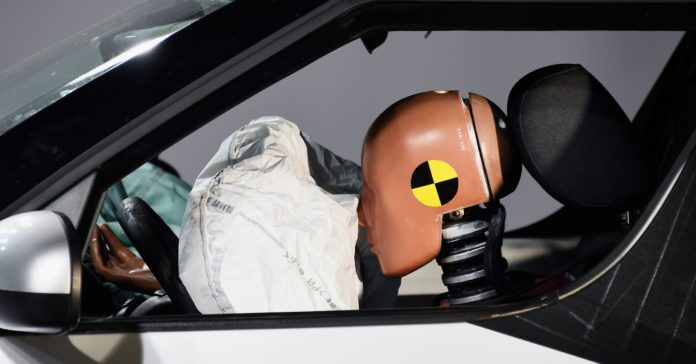 I can imagine the meeting: A dozen engineers are gathered around a conference table to discuss automobile safety. How can we protect people during a car crash? We have already added seat belts and crumple zones to cars. Is there anything else we can include? One attendee reluctantly raises their hand with a suggestion: “How about we add an explosive in the steering wheel?” Brilliant. That’s exactly what we will do. We will put a bomb in the car and it will save lives.

They were right. Airbags are explosives and airbags save lives—but it’s still a crazy idea.

The original idea for the automotive airbag dates back to the early 1950s. It wasn’t exactly an explosive-powered device. It involved a compressed gas that would release to fill a type of bladder. This design didn’t work very well—it wasn’t fast enough. It turns out the only way to get an airbag to inflate fast enough to be useful is with an explosive. OK, technically it’s a chemical reaction that produces gas to fill the bag—but that’s essentially an explosion.

So, just how fast does the airbag need to inflate? Let’s do a rough estimation to get the minimum inflation time.

Here is the situation. It’s a nice day for a picnic. Let’s go on a picnic, shall we? I will bring some food and you can bring the blanket. Hop in the car and I will drive. Driving along and all of sudden—a deer in the road! Swerve! Crash into a tree. Blam.

The car was traveling only 35 miles per hour (15.6 meters per second) and when it crashes into the tree, it stops instantly (which isn’t true—but close enough). There is one other important thing to estimate, the distance from the driver to the steering wheel. I’ll be generous and put this at a value of 0.5 meter; it’s probably lower than that.

Here is what happens. The human is traveling at 15.6 m/s inside a car that just stopped instantly. The air bag has to deploy before the human collides with the stopped steering wheel. Now for some physics. If we assume no forces on the human (forget about the seatbelt for now), the human will have a constant velocity. With this constant velocity, we can calculate the time to impact using just the definition of average velocity in one dimension:

Using the values of 15.6 m/s for the velocity and a distance of 0.5 meters, I get a collision time of 0.032 seconds. That is a super short time—like the blink of an eye. OK, actually it is less than the “blink of an eye” which seems to take around 0.1 seconds. But wait! It’s even worse. This calculated time is how long it would take for the human to hit the steering wheel. But the idea is to have the human hit an airbag instead. That means that not only does the airbag have to inflate in this time, but it also decreases the distance the person can travel. Let’s say the distance is cut in half—that also cuts the inflation time in half to about 0.016 seconds.

Try blowing up a balloon in under a tenth of a second. It’s pretty much impossible. Now try doing the same thing for a larger bag in even less time. You can’t do that with air. The only answer is an explosion that produces a gas to fill the airbag.

It’s even crazier than you think. Let’s imagine what has to happen for this collision (which is just at 35 mph).

All of that has to happen before the human hits the bag. Crazy. OK, it’s true the seatbelt also slows the human down during the collision. This will give the airbag a little more time to deploy. This is also why you should wear your seatbelt—even if your car has an airbag. Or better yet, just watch out for deer on the road and drive carefully.