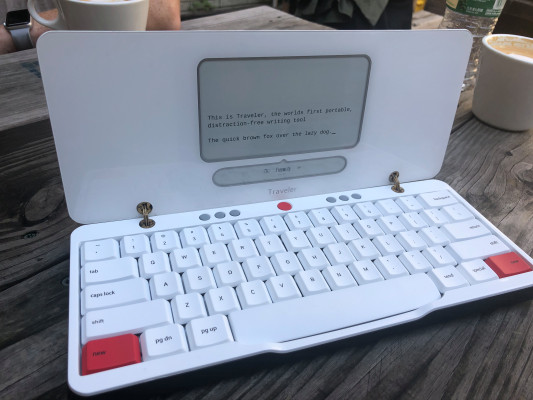 If you’ve ever tried to write something long – a thesis, a book, or a manifesto outlining your disappointment in the modern technocracy and your plan to foment violent revolution – you know that distractions can slow you down or even stop the creative process. That’s why the folks at Astrohaus created the Freewrite, a distraction-free typewriter, and it’s always why they are launching the Traveler, a laptop-like word processor that’s designed for writing and nothing else.

The product, which I saw last week, consists of a hearty, full-sized keyboard and an E ink screen. There are multiple “documents” you can open and close and the system autosaves and syncs to services like Dropbox automatically. The laptop costs $279 on Indiegogo and will have a retail price of $599.

The goal of the Freewrite Traveler is to give you a place to write. You pull it out of your bag, open it, and start typing. That’s it. There are no Tweets, Facebook sharing systems, or games. It lasts for four weeks on one charge – a bold claim but not impossible – and there are some improvements to the editing functions including virtual arrow keys that let you move up and down in a document as you write. There are also hotkeys to bring up ancillary information like outlines, research, or notes.

If the Traveler is anything like the original Freewrite then you can expect some truly rugged hardware. I tested an early model and the entire thing was built like a tank or, more correctly, like a Leica. Because it is aimed at the artistic wanderer, the entire thing weighs two pounds and is about as big as the collected stories of Raymond Carver.

Is it for you? Well, if you liked the original Freewrite or even missed the bandwagon when it first launched, you might really enjoy the Traveler. Because it is small and light it could easily become a second writing device for your more creative work that you pull out in times of pensive creativity. It is not a true word processor replacement, however, and it is a “first-thought-best-thought” kind of tool, allowing you to get words down without much fuss. I wouldn’t recommend it for research-intensive writing but you could easily sketch out almost any kind of document on the Traveler and then edit it on a real laptop.

There aren’t many physical tools to support distraction-free writing. Some folks, myself included, have used the infamous AlphaSmart, a crazy old word processor used by students or simply set up laptops without a Wi-Fi connection. The Freewrite Traveler takes all of that to the next level by offering the simplest, clearest, and most distraction-free system available. Given it’s 50% off right now on Indiegogo it might be the right time to take the plunge.