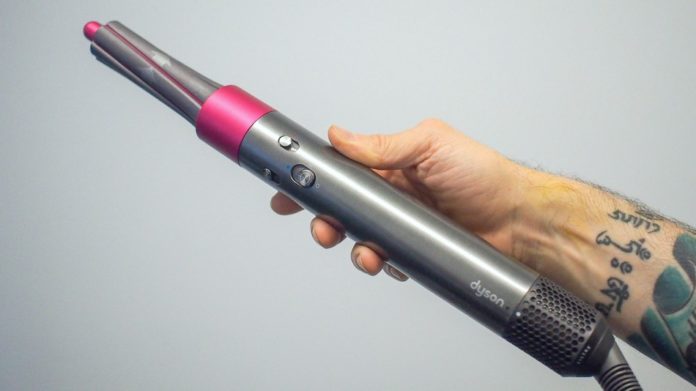 Dyson wants to curl your hair… with air.

Not satisfied with disrupting hair dryers, Dyson is applying its air-blasting motor tech to breathe new life into another area of personal haircare: curlers and stylers. The Dyson Airwrap can curl hair, add volume, or get frizzy hair under control. And it does so without the extreme heat that can sometimes cause damage, instead using jets of air to grab and style the hair, one shock at a time.

The Airwrap is the second product Dyson has made for the personal-care market, the first being the Supersonic hair dryer. Like the Supersonic, the Airwrap uses a tiny version of the company’s V9 motor that run at 110,000 rpm’s to blast air at high speed.

Also like the Supersonic (and every Dyson product for that matter), the Airwrap commands a hefty premium above what most folks are used to paying for personal haircare products. Whereas a search on Amazon reveals most curling irons are priced below $50, the Dyson Airwrap starts at $499.99. Even comparing to just stylers that use hot air, like this one from Conair, that’s stratospherically high.

Still, this is Dyson, so the high price tag is expected. And from what Dyson showed me — I got a chance to check out the Airwrap in a demo session in advance of Tuesday’s unveiling — the styler does its job extremely well.

How the Airwrap works

The Airwrap itself looks just like a lightsaber handle: a glossy, dark gray tube with an air-intake filter on the bottom (the perforated filter pops on and off easily thanks to magnets) and a purple-colored rim on the top end, where the air comes out. There are three switches close to the top for controlling the air flow and temperature. It’s also very lightweight — although keep in mind you need to plug it in to use it. 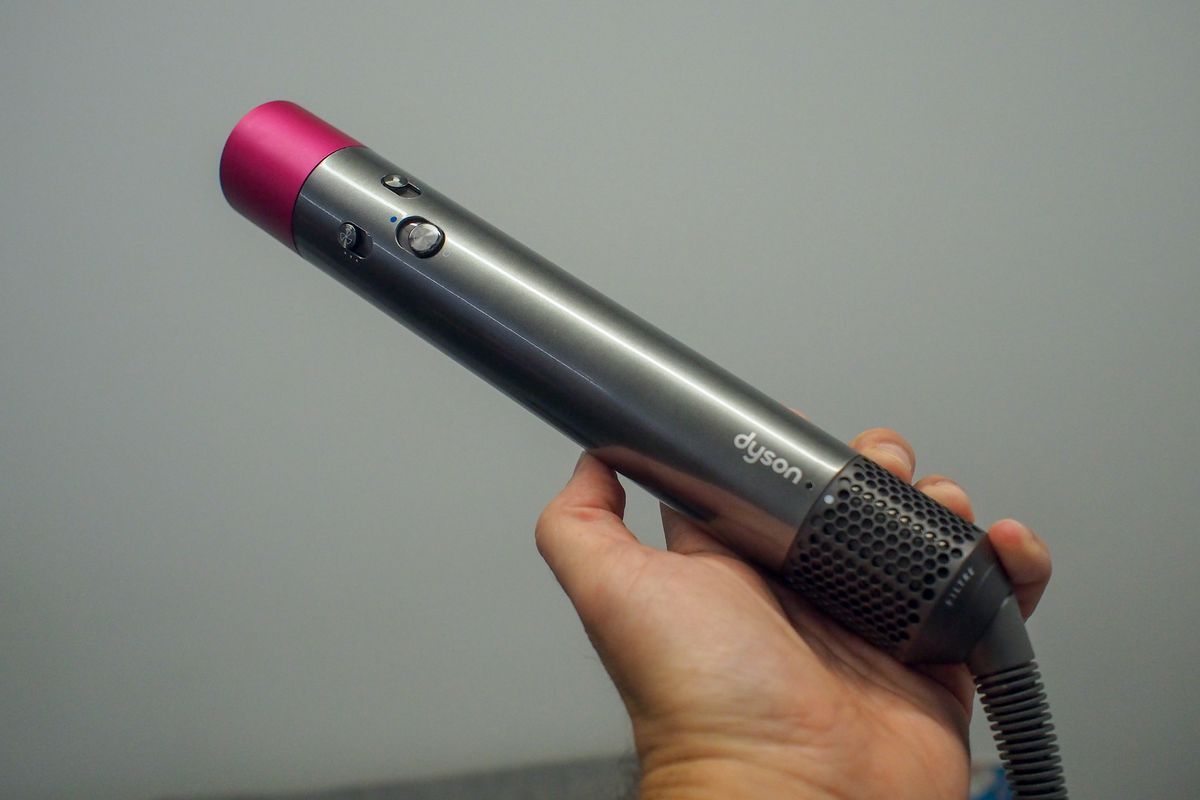 Without a head attached, the Dyson Airwrap resembles a lightsaber handle.

The curler and brush heads attach to the top, each with similar purple-and-gray colors. The curling heads are roughly cylindrical, with arrows on them to tell you the direction of air flow. The rush of air over the surface of the head creates what’s called the Coanda effect, which naturally pulls things closer — in this case, hair. 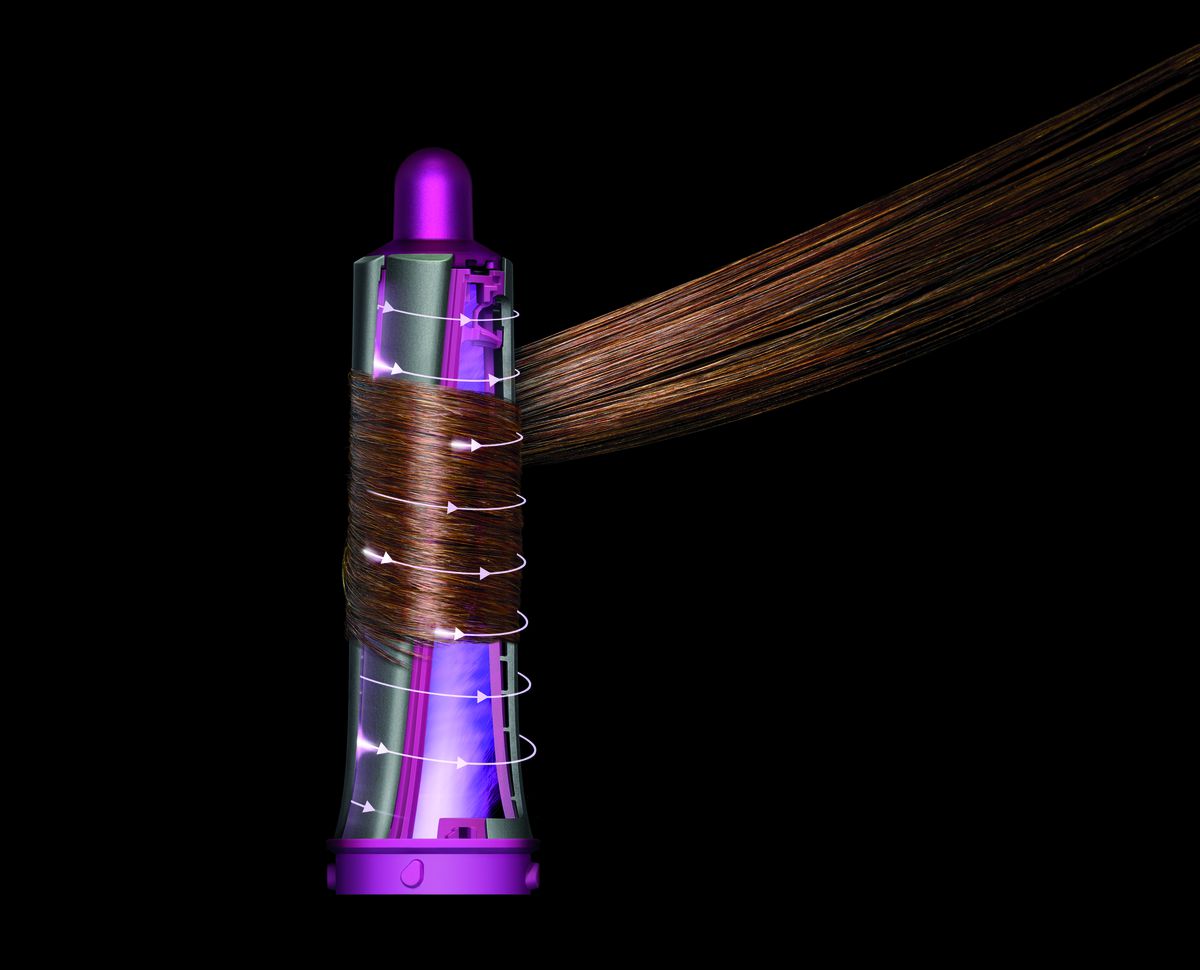 How the Airwrap uses air to curl hair.

I had never used a curling iron before, so a stylist, Jon Reyman of Spoke & Weal in New York, walked me through my first experience with the Airwrap. Holding a shock of hair (not mine — one of the PR reps was kind enough to lend her hair for the exercise) in one hand, I put the Airwrap underneath and turned it on. Instantly the hair curled itself around the styler, and the closer I moved it toward the person’s head, the more hair became wrapped in the Airwrap’s effect. 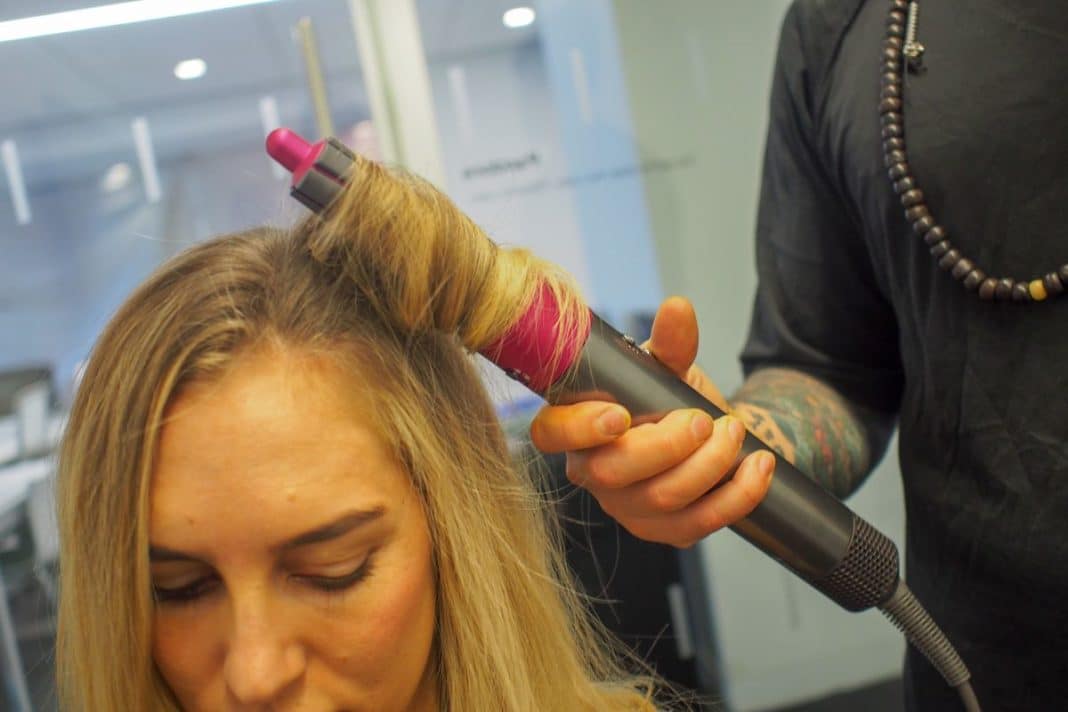 The Airwrap is intuitive to use.

After curling the hair for a few seconds (no more than five), I gave it a “cold shot” of cool air for a second and then turned it off. Pulling the Airwrap away, the blonde shock fell away easily, and instead of straight hair, there was a gentle curl.

“Dyson has created what I think is a better mousetrap,” Reyman said after we were done. “This [kind of curl] isn’t possible without using extreme heat.”

Of course, one shock of curl on a head full of straight hair wasn’t going to fly for our model, so we broke out a different head to reverse the process. While the Airwrap isn’t a hair straightener per se, there are two brush heads that are meant to smooth out frizzy hair and get voluminous curls under control. A few strokes with the Airwrap using a brush head with soft bristles and her hair was passably straight again.

How the Airwrap works with brush heads.

The Airwrap also includes a “pre-styling dryer” head that looks just like the Supersonic. So you could theoretically get the Airwrap to not just be your styler, but your hair dryer as well, although the Supersonic has its own heads and features to give you more flexibility in that regard.

Whether you use a separate hair dryer or not, the Airwrap does have a drying effect, and it’s intended to be used on damp hair.

“[Normally,] I’ll have to blow dry hair and then, if I wanted a curl, I’d have to use a curler, so I’m doing a two-step process,” said Reyman. “Here, I can take the hair while it’s still damp and work it. So it’s a shorter process.”

Dyson is very clear that the Airwrap is aimed at consumers looking for an easy and effective do-everything styling solution, not stylists who already favor professional equipment. 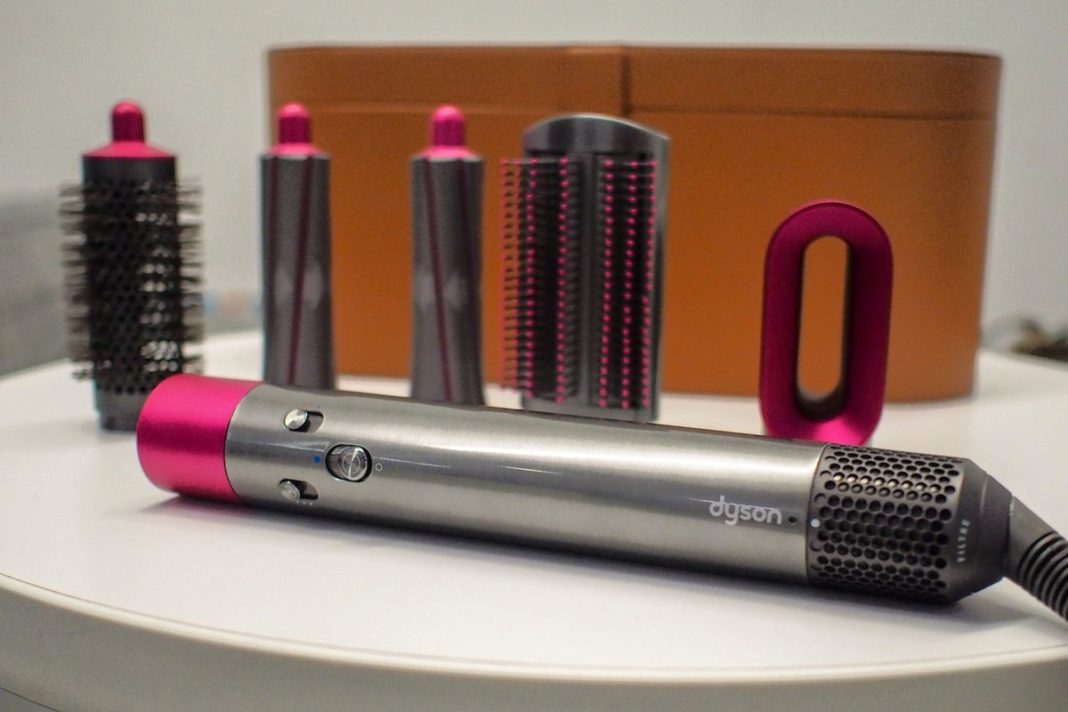 The Airwrap with a soft brush, two different-size curlers, a round brush, and the pre-styling dryer.

Since everyone has different hair with different needs, it’s offering three different packages, with different sets of heads. All three packages some with the pre-styling dryer and two 1.2-inch curlers. 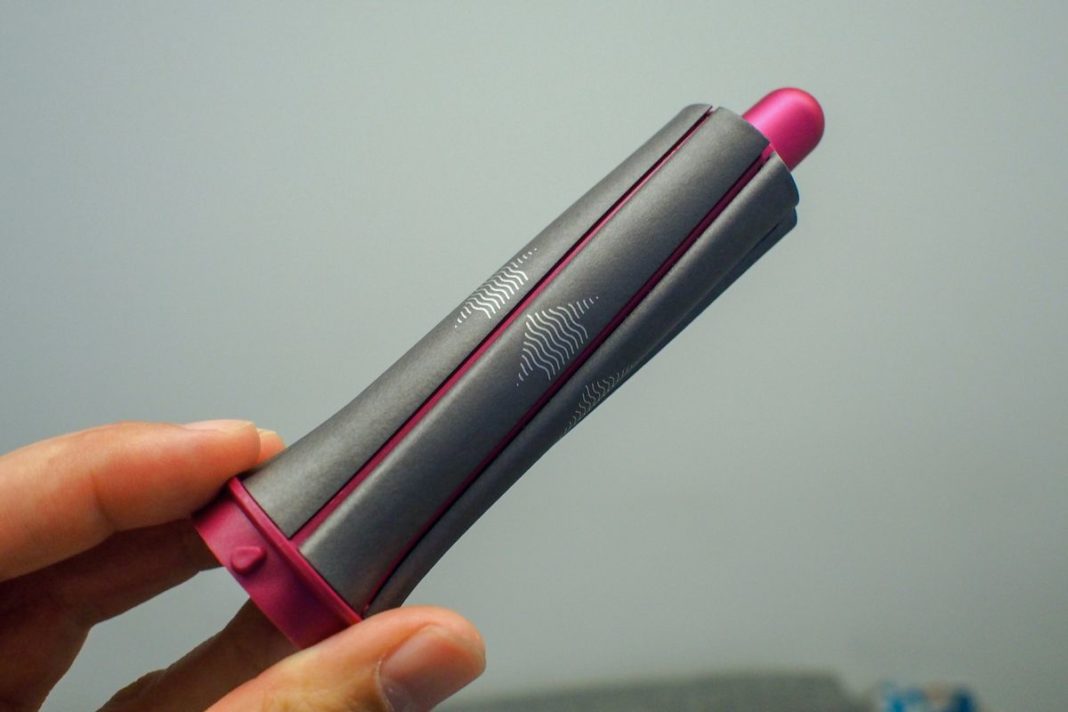 The curler has arrows to show the direction of air flow. 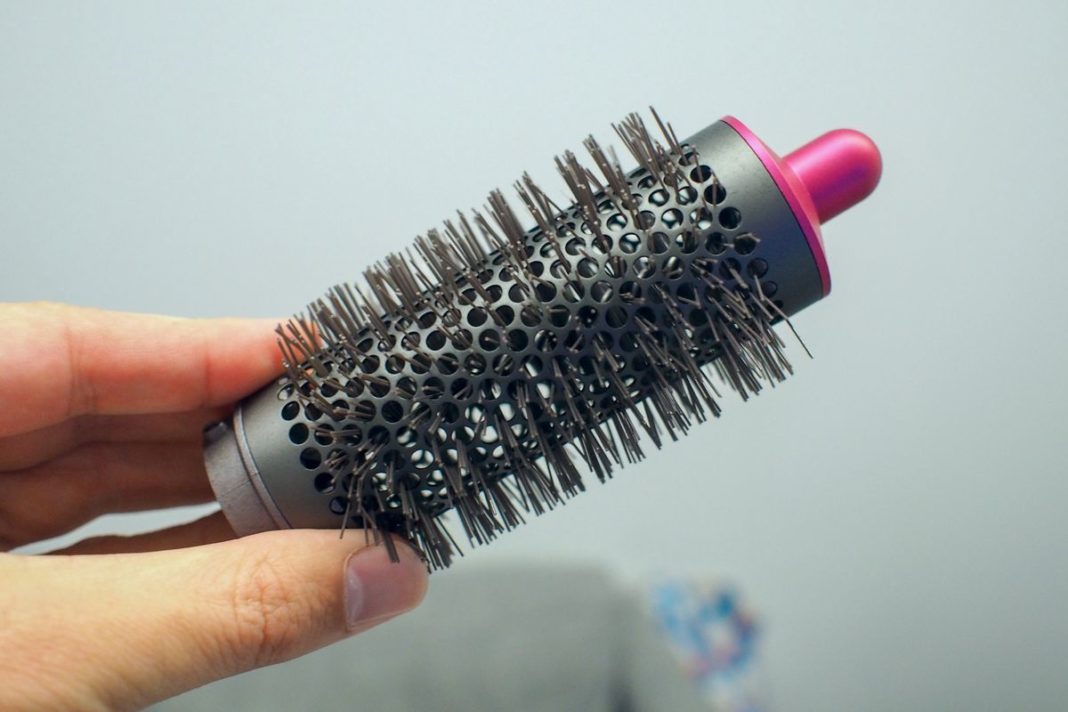 The round brush has perforations for air flow.

Yes, $500-$550 is a pretty big chunk of change, no matter what package you go for. But from my brief time with the Airwrap, I came away quite impressed. As a curling novice, I felt confident using it after learning the basics, and since it never gets too hot, I wasn’t dissuaded by any potential damage I might do.

Plus there’s something to be said about never having to worry you might burn the house down. 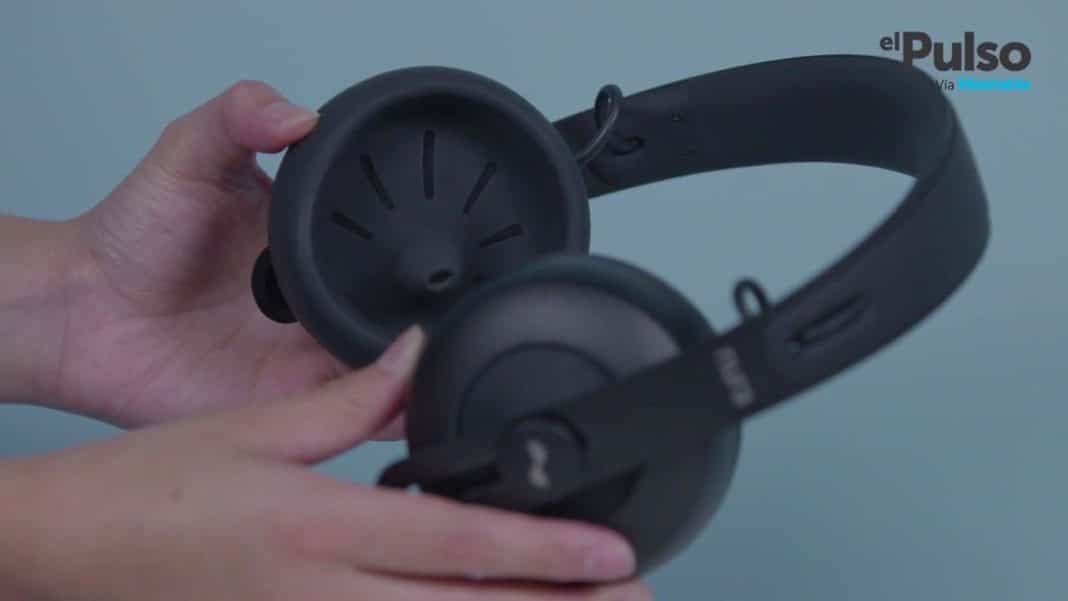 This New Bandage Can Suck Bacteria Out Of A Wound

GizmoCrazed - September 8, 2015 0
Bandages are key to protection of a wound from harmful external agents that exist in our surroundings. They keep harmful bacteria from penetrating the...

Unsurprisingly, Netflix viewership is way down because of the Super Bowl