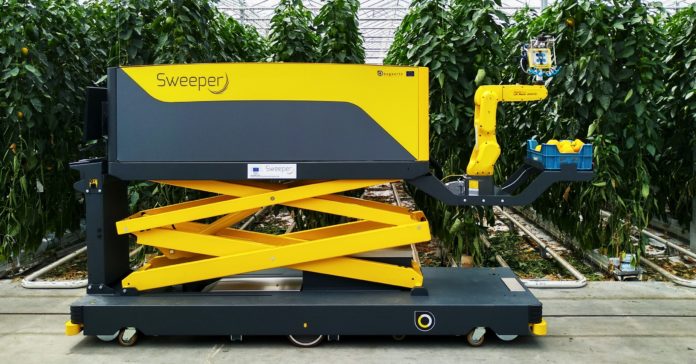 Rejoice! The machines won’t be taking over the world anytime soon, because doing the most basic of tasks still confounds them. I mean, have you thought lately about how hard it is to pick a ripe bell pepper?

Fine, me neither. But researchers in Israel and Europe certainly have. They’re developing a robot called Sweeper that can autonomously roam a greenhouse, eyeballing peppers to determine if they’re mature enough before sawing them off the plant and placing the produce in a basket.

Think of Sweeper like a self-driving car, only with a saw on its face and a hunger for peppers. To find its way around the rows of the greenhouse, it uses sensors like lidar (the spewing forth of lasers to determine distance). As it creeps along the plants, it stops every few feet to take images of them.

“The moment it finds something sort of like a pepper, it will try to approach it,” says industrial engineer Polina Kurtser of the Ben-Gurion University of the Negev, in Israel. It then takes a more detailed look, craning its head (with attached camera) back and forth to examine the fruit from multiple angles. It shines its own light at the plants, which means it can work in the greenhouse day and night.

It’s at this point that Sweeper is looking closely at color. When bell peppers mature, their colors change unevenly—some bits of the fruit will turn yellow, while splotches remain green. This is an indication that the pepper is getting there but isn’t fully ripe, which is exactly where the robot wants it, because the fruit will continue to ripen en route to market.

Now the fun part: The robot positions its head so the small saw on its brow rests above the stem, and the scoop on its chin hangs below the pepper. It cuts the fruit free, dropping it into the scoop, then turns and places the pepper in a collection basket.

It does this once every 24 seconds. “You might say it’s a bit long at the moment, because a human worker is capable of doing it in three to four seconds,” says Kurtser. “On the other hand, a worker isn’t working 24 hours a day.” Plus, the researchers have been running the robot in a slow mode out of safety considerations for the humans working around it—they figure they can get the picking time down to 15 seconds.

Weirdly, the biggest hangup is the simplest maneuver: Dropping the pepper into the collection basket takes three or four seconds— it has to turn away from the plant and carefully lower the fruit. The hack there might be to run a tube of some sort so the fruit goes straight from cut to basket, skipping the scoop on the chin.

Sweeper is lucky to have made it even this far. A greenhouse is hot, humid, and generally not a welcoming place for robotic sensors, so the engineers had to order special cases and materials to keep things working. “We’re not the only ones who don’t like the heat in the greenhouse,” says Kurtser. “The sensors were quite unhappy with that as well.”

A greenhouse also presents a challenge for the robot because it’s an unstructured environment. The plants are arranged in neat rows, but clearances are tight, and the vegetation grows all over the place. So Sweeper not only has to avoid obstacles, but delicate ones at that—crunch up a plant and it may be done for the season. “If you bring a robot to a BMW factory, you create an environment for it to be able to operate,” according to Kurtser. “When you take a robot into an environment that’s very agricultural, you can’t really design much—you have to fit into what’s there.”

That and each crop may require a different kind of robot. You can’t set Sweeper loose in an apple orchard and expect it to come back with any fruit. (A robotic apple picker, as it happens, works on more of a vacuum principle.) But that’s not to say engineers can’t borrow ideas from a robot designed for one crop and apply it to something similar. A modified version of Sweeper, for instance, might work for harvesting cucumbers.

“It sort of has the same problems in terms of obstacles and density and the same growing system,” says Kurtser. A major difference being that cucumbers don’t mature with the same color scheme. It’s mostly green on green on green. “So you can take something from the harvester, but you probably need to have some other algorithms for detection.”

Different crops also will demand different packaging robots. “Strawberries are often picked and placed in their final clamshell directly in the field to prevent bruising,” says Brandon Alexander, cofounder & CEO of Iron Ox, which is developing a roboticized greenhouse, “whereas bell peppers may go into an intermediary step like a bulk bin first, or into something like a three-count sleeve.”

Sweeper and other picker robots (oh, and one that pollinates blackberries like a huge bee on wheels) are just beginning to take shape. But with California’s farms alone facing a labor shortage of perhaps 20 percent, now’s as good a time as any for the machines to learn to get a grip.